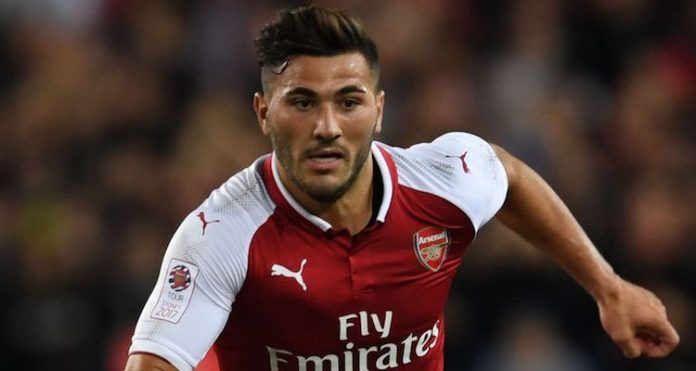 Hello again. I remain discombobulated by time but I know for certain that Arsenal’s Europa League game against Red Star Belgrade is actually tomorrow evening. Today is now the day I thought it was yesterday, the coffee is still good, and there we go.

Immediate focus remains on that game, but it’s hard not to think about Man City on Sunday as well, and hopefully there’ll be good news over Sead Kolasinac who had to go off with a recurrence of his hip injury during the 2-1 win over Swansea at the weekend. According to the Evening Standard, Arsenal are ‘hopeful’ over the Bosnian, but his absence would mean a rejig at the back.

The obvious candidate to replace him on the left is Nacho Monreal, but having cemented himself firmly as a member of the first choice back three, it does leave a bit of gap. Rob Holding would likely be the man to fill the gap, and lest we forget he played there in the FA Cup semi-final win over City last season.

The absence of Kolasinac would be a blow though, not least because of the physicality he brings to the side, but his ability to contribute in the final third. Defensively I think there are still a few things here and there that he can improve on.

It’s too early to say whether the times he’s been exposed are flaws in his game or in Arsenal’s defensive system which does have a habit of leaving players bewildered and bereft, but when you look at what he’s done up the other end of the field this season it’s really impressive. I hesitate to make the comparison with Thomas Vermaelen who caught the eye in his early Arsenal days because of the goals he scored, but it’s not dissimilar.

He has three goals and three assists to his name so far, and he looks as assured up there as any good attacking midfielder you’d like to think of. The quality of his finish against Swansea was superb, placing it with power rather than just having a lash, and his ability to pick a pass in dangerous areas is really promising.

When it matters [in games], he finds me and makes good passes so I can score. He is an intelligent player who can create good goal-scoring opportunities. He’s already demonstrated his quality. He’s scored goals, provided assists and shown what he can do both in European and league games.

It looks have to have the potential to be a really strong partnership down that left hand side, typically where Arsene Wenger has always liked his teams to be dangerous from. There appears to be a good understanding between them already, and if we’re going to get anything from a City side that is scary good, we’ll need to see some of that on Sunday.

Meanwhile, Arsene Wenger says he’s been impressed with Mathieu Debuchy at centre-half. The former French international’s Arsenal career has been a bit of disaster really. He’s had countless injury problems, and of course made the decision to jump ship on loan ahead of the European Championships in 2016, something which led to questions about his commitment and fight having lost his place to Hector Bellerin.

He has a contract until 2019, and given our need to rotate so often this season, the manager thinks he might get games in the back three, saying:

Maybe his future is as a centre back. He has the attributes because, despite his size, he is very good in the air. You think he couldn’t play centre back because he’s not tall, but if you look at the number of balls he wins in the air it’s impressive.

Long-term he’s hardly a solution, the need to address the age bracket of our defenders is obvious with a clutch over players into their 30s, but in the short-term as we juggle Premier League, Europa League and Carabao Cup his presence in the squad is handy. And he was pretty good in both the games he played so far, albeit against opposition you’d expect him to be able to manage.

Finally for today, I’m sure you’re all aware of the upcoming ’89’ documentary which recaptures that amazing night at Anfield, but here’s something a bit cool. You can set up your own screening of the film in a cinema near you. It’s kind of like crowdfunding, you choose where you want it to take place, and other people pledge to buy tickets to go and see it. Once enough people have responded it to make it viable, they take the ticket price and the screening goes ahead.

For more info on that, check out the 89 page on OurScreen. It is UK only, but still a really fun way to get people together and relive what was one of the best nights ever. Steve McMahon and his one minute finger might disagree though:

Right, that’s it for me for today, bar a quick reminder that if you’re in Sydney this weekend, there are still some tickets left for the event I’m doing at the Sports Writers Festival. All details on their website here.