Morning everyone, welcome to an Interlull Friday. Every day I sit down to write this blog, and there’s a plugin thing for WordPress which judges me. Over at the bit where I can choose to publish etc, it gives you a rating for ‘Readability’.

Almost every single day it shows me something like this: 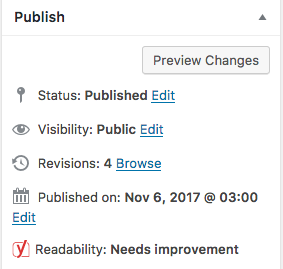 I’m not saying it gets me down, but it’s a bit relentless. Perhaps it’s trying to motivate me, a cruel to be kind judgement on my writing, but it’s a bit much sometimes. We all have our difficult days but there’s no need to be quite so brutal. I guess I could just turn that particular feature off, but I now have a real need to see something like this:

That’s what it’s showing me at the moment, after 130 words, let’s see where we are at the end of this post. So, what’s going on? Not a whole lot, it’s fair to say. The World Cup qualifiers are taking place this week, and Granit Xhaka was in action for Switzerland last night against Northern Ireland.

The Swiss won 1-0 thanks for one of the most ludicrous penalty awards you’ll ever see. The ball clearly hit the back of the Northern Ireland defender, but the referee pointed to the spot and one-time Arsenal target Ricardo Rodriguez stepped up to score what turned out to be the winning goal.

I guess it will lead to more calls for VAR to be implemented, and you can understand that. I’m still a bit undecided about video refereeing, but in cases like this it would surely be pretty easy and quick for a referee to call for a second look and for the official who has access to the replays to make the right decision. It wouldn’t really affect the flow of the game, and it would mean an egregiously bad call is overturned, and that can only be beneficial to the game.

Anyway, as far as I can tell Xhaka is the only Arsenal player involved in competitive action during this Interlull. There are friendlies though, with Aaron Ramsey set to face Laurent Koscielny, Olivier Giroud and Alexandre Lacazette as Wales play France in a friendly. Mesut Ozil is away with Germany, while Alex Iwobi and Mohamed Elneny will play for Nigeria and Egypt respectively. Alexis Sanchez has the remarkable luxury of two weeks off, during which he’ll practice passing to people in the same shirt as him (I kid!).

There’s also vague, very vague, Arsenal interest when Ireland face Denmark this weekend, with former Gunner and greatest striker that ever lived Nicklas Bendtner in their squad. He’s finally turned into the goal machine we all so fervently hoped he’d become when he wore red and white, with 20 goals this season for Rosenborg.

Maybe it’s because the standard of the Norwegian league isn’t as high, maybe it’s because he’s stopped getting rat-arsed and trying to make sweet, sweet love to taxis, or maybe it’s something in the middle. He’s almost 30 now, and I suspect he might look back on his career with some measure of regret, but he could well cause Ireland some problems if he has his mind on it.

Meanwhile, further afield, Eddie Nketiah continues to catch the eye with his goalscoring exploits. He bagged four for England in an Under 19 European Championships qualifier. Ok, some might say that it was only against the Faroe Islands, not a nation renowned for its footballing strength, but I don’t think we need to focus on that.

I recall a certain Ian Wright scoring four goals for England against San Marino, and nobody said he wasn’t great. You still have to put the chances away, and clearly Eddie did that. Now, I’m not saying he’s the new Ian Wright – although he clearly very much is – but the comparisons are impossible to avoid. They both have feet which they use to kick the ball into the net, and a head which is primarily used for looking around but sometimes for heading the ball into the net.

The similarities are uncanny. No pressure on the lad, of course, but the sooner this 18 year old who will turn out to be the saviour of this football club gets motoring the better off we’ll all be.

And almost finally, some fixture change information. The game against Chelsea which was due to take place on January 1st has now been moved to January 3rd. This is because the game against West Brom is now taking place on New Year’s Eve, with a wonderfully convenient kick off time of 4.30. Television, the drug of the Nation. £££$$$.

Ok, so here we are at the end. How have I been judged?

Goddam. I guess I’ll have to have another go tomorrow. For now, I’ll leave you with this week’s Arsecast in which I chat to Dara Ó Briain about all kinds of stuff. Please listen and subscribe, rate and review, thanks folks.