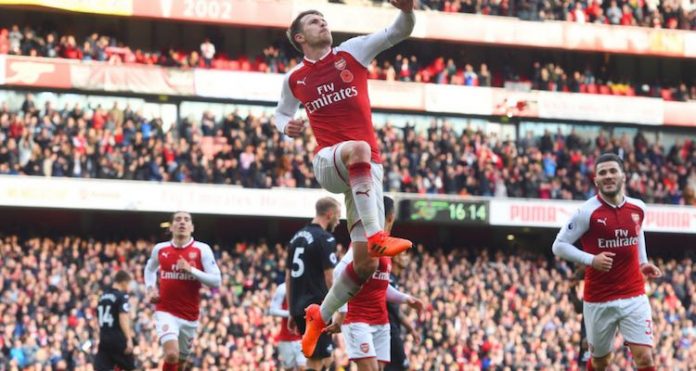 It’s Monday of the last Interlull of the year. The next one is next year. March maybe? I dunno, but there are only a few days left of this one for us to endure.

One of the main worries about players going away is them picking up injuries, and there’s a worry this morning over Olivier Giroud who won’t be in the France squad for their game with Germany because of a thigh strain. As yet we don’t know quite how bad it is, but it will be something of a worry ahead of the North London derby at the weekend.

Even if he wasn’t going to start, having him as an option on the bench would have been useful, but we’ll just have to wait and see how serious the problem is. His absence would be offset a bit by the return of Danny Welbeck though, who is due to return to the squad after his latest setback.

I know there are those out there who will be hoping that if Giroud is missing for the Cologne trip that we might get to see Eddie Nketiah start, it’s more likely that Welbeck will be asked to fill in – unless Arsene Wenger sees him as somebody he wants in his Premier League team. With Alexis Sanchez and Mesut Ozil not quite at their best, the England man feels like a reliable option for the manager who does tend to start him often when he is fit.

With Alexandre Lacazette currently the first choice up front, the only way to get Welbeck in the team is in the wide areas, so it’ll be interesting to see what happens there. If a derby against that lot is a bit too hot to throw him into, the Cologne game could help him get some match fitness ahead of what’s going to be a difficult enough trip to Burnley in our following game. Of course, on the basis of what we’ve seen this season so far, an away game against a team of drunk, peg-legged pirates would be a challenge for us.

The other one that might have hearts in mouths a bit is the absence of Aaron Ramsey from the Wales squad for their game against Panama. The article suggests that he was never intended to play this particular game, but until we hear there’s a clean bill of health I’m going to be a bit suspicious about this one – especially as they’ve called up a replacement. If he wasn’t ever going to be picked for this game, why didn’t they have that cover in the squad already?

If he were injured it would bring into sharp focus the issues we have in central midfield. It remains an area which I think is problematic for us. Ramsey and Granit Xhaka is probably the best combination we have, but even so you wouldn’t go far as to say it’s anywhere near as good as it should be. The Welshman’s desire – perhaps even his instruction – to get forward often leaves his partner isolated, and I’ve lost count this season of how many times the only pass available to Xhaka is either backwards, or a very difficult forward option where he has to dissect a line of opposition to find an Arsenal shirt.

I know I keep harking on about it, but given the personnel we have available to us, I think the best option for us is an extra man in there. It would likely mean reverting to a back four, something the manager doesn’t seem keen to try, but until we add some quality to central midfield via the transfer market, we’re going to be weaker in there than we should be.

He might still be a little off full match fitness, but if Ramsey is absent, I’d like to see Jack Wilshere given a go in that position. He could sit a little deeper and provide Xhaka with a bit more support, but I’m not sure Wenger will go for it. Not simply because he’d have an issue with two left-footed players in the centre, but because from what he’s been saying about Wilshere he sees him as someone who is an option for the front three.

I see the logic of playing him there in the Europa League and the Carabao Cup, build his fitness in an area of the pitch that’s a little less physically demanding, but he’s more naturally suited to a deeper role than deployed out wide. In a different formation you could see him working as a number 10 of sorts, but that’s not a position we have – much to Mesut Ozil’s chagrin, I’m sure.

Anyway, that’s an issue we have to face if Ramsey is injured and not available for Saturday. The other options – Francis Coquelin and Mohamed Elneny – will have to be considered if that is the case, but we should get more information on this as the week progresses.

Right, that’s your lot for this morning. James and I will have a landmark Arsecast Extra for you later on. We’ll be recording around lunchtime so if you have questions or topics for discussion please send to both @gunnerblog and @arseblog on Twitter with the hashtag #arsecastextra.