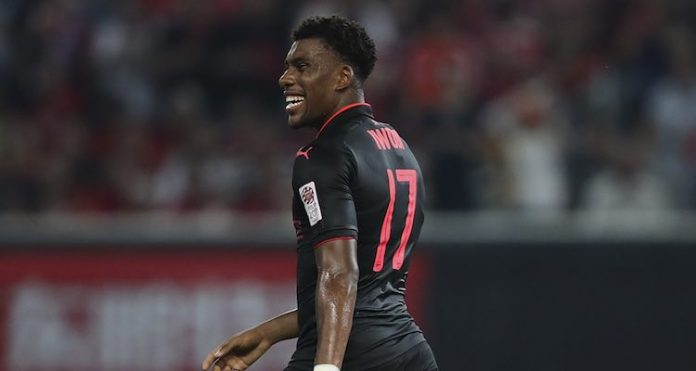 It’s been just over 18 months since Alex Iwobi broke into the Arsenal first team. Over that time period he has, as young players are wont to do, experienced peaks and troughs in form. Yet he is still considered an important player in Arsene Wenger’s squad. In many respects, he has become Wenger’s answer to Park Ji Sung, in that he is far more likely to be selected for a big away game, compared to any other fixture.

This is because he has attributes that are useful to Arsenal- especially in this type of match. Iwobi did not enormously stand out at youth level, but he broke into the Gunners side because its technical competency was steadily dropping. The likes of Arteta, Cazorla and Rosicky came out of the team one by one during Iwobi’s breakthrough season and his technical level became valuable.

Arsene’s reputation for developing talent has taken a bit of a battering over recent years. The man that made his name polishing rough diamonds like Weah, Vieira, Pires, Fabregas and Henry into precious gems has struggled to repeat the trick. The likes of Chamberlain, Walcott, Gibbs and even Gael Clichy struggled to build on early promise. So where does Alex Iwobi stand nearly 2 years into his top level development?

Iwobi’s technical level is vital to a team like Arsenal. The Gunners have some good passers in defence and some accomplished technicians in attack, but the midfield is something of a crater when it comes to short passing combinations. Ramsey and Xhaka are good players with valuable attributes, but neither plays the sort of one touch triangles Wenger teams are associated with.

Iwobi is similar to Tomas Rosicky in that he speeds Arsenal up in transition. His makes simple, decisive movements and he makes them quickly. He is always on the move and open to receiving and distributing the ball. He’s a connector and the manager seems to have stopped acquiring this sort of player.

In the 2007-08 midfield- the best the manager has ever built in my opinion- there were two ‘connectors’ in Rosicky and Hleb, operating with a technical pilot in Cesc Fabregas. This season, Wenger has played Iwobi in one of the inside forward positions, but with a kind of hybrid central midfield function in mind.

Lacazette’s goal against Manchester City is perhaps the finest illustration of this. Iwobi drops back into central midfield, spins away from de Bruyne in one silky movement and releases Aaron Ramsey, who has run on ahead of him. Iwobi is a decent presser, but I don’t think Wenger has started him at Stamford Bridge and the Etihad purely for his defensive or physical attributes.

I think the manager has also picked him for increased technical assurance- which is important too because Alexis is a bit of a turnover merchant in the forward line. In the bigger games, Özil’s lack of off the ball rigour, plus Sanchez’s tendency to lose possession has seen Arsene opt for either Iwobi or Welbeck in the forward line- to the detriment of Alexandre Lacazette, who operates on the periphery of games.

The Nigerian also has valuable physical attributes, especially in the press. In the muscular sense, he is already well developed and able to hold players off. Friend of the site @DJTayo has been known to wax lyrical about Alex’s “big African backside.” Iwobi very much mixes silk and steel and makes the Gunners a touch more imposing physically, as well as technically.

Iwobi needs to develop better end product- which is true of most players of his age. When he plays for Arsenal, it is usually in place of Alexis Sanchez, Mesut Özil or Alexandre Lacazette, which is a highly productive front 3. His recent goals for his country and the strike against Brighton at the Emirates hopefully provide some optimism.

Similar players to Iwobi, such as Alex Hleb and Tomas Rosicky, likewise struggled to notch goals and assists regularly (Rosicky developed this significantly towards the end of his career). But Hleb and Rosicky were “enablers”, they helped the team function so they had a far less tangible impact on the team’s end product, but their presence was felt, even if it wasn’t entirely perceptible.

The problem for Iwobi is that the Arsenal team is not a highly functioning unit. The Gunners are heavily reliant on their front 3 to produce in spite of the structural issues behind them. In a sleeker motor, Iwobi would oil the engine very nicely. But Wenger’s team doesn’t really have an engine; it has three sets of jump cables upfront. Alex is a victim of the fact that he is more car battery than jump cable.

Though physically developed in terms of his frame, Iwobi’s endurance is actually pretty poor, even given his age. His stamina really needs to develop, as he struggles to properly influence games after the 65 minute mark. His running gait takes on the appearance of an elderly pensioner climbing out of a chair on a cold day in the latter stages of a game. Alex needs to boost his athletic profile a little.

This is a shame because he is generally a good presser when played in Arsenal’s front 3, but he struggles to maintain intensity. His defensive awareness has improved since he first came into the team, but I think this is generally because the inside forward role is slightly less demanding over long distances, compared to playing on the left hand side as he did when he first broke through.

Iwobi would often make the mistake of tracking back for the sake of being seen to track back. Once he actually arrived in a defensive position, he was usually off the pace and didn’t try to affect the game with defensive input. It was essentially window dressing for the benefit of the dugout. In the inside forward position, his role is geared more towards pressing opposition defenders as opposed to tracking runners.

This suits his physical profile better, but he still struggles to maintain his energy levels over much longer than 60 minutes. I’m no fitness expert, so I’ve no idea how one goes about improving one’s stamina, especially when still in the stage of physical development. But there is food for thought for Arsenal’s strength and conditioning staff there.

Overall, I think Iwobi is a player of immense promise. What’s more, he looks like “an Arsenal player” to me, which is incredibly valuable. He is not a young player on the same level as Mbappe or Gabriel Jesus, but he doesn’t have to be to be a success in North London. Lots of top level coaches like to work with young players because they are more malleable and can be moulded to fit the gestations of the team.

Ferguson did this constantly. The likes of Brown, O’Shea, Fletcher and even Welbeck were not elite level young players in terms of ability, but they made valuable contributions to the way United played. With smart coaching, Iwobi can be moulded into a precious member of the Arsenal team, if he continues to accentuate his strengths and work on his weaknesses.