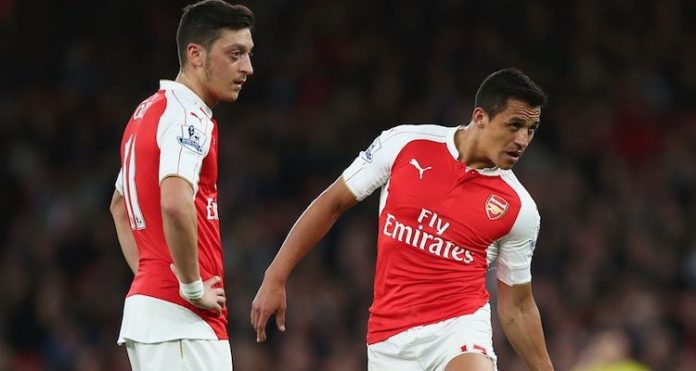 Last night I dreamed about that thing that many people dream/daydream about: a new manager for Arsenal.

I don’t know quite why it happened, whether it was the end of Arsene Wenger’s reign or he’d been fired for some other reason, but we appointed the legendary Paolo Maldini as the new boss. I can’t quite explain the excitement that it generated. It was like the sky was bluer, the air was cleaner, the sun was sunnier, everyone was so happy.

And Arsenal were shit. I mean, really, really, really shit, but nobody cared because Maldini was so handsome. He would explain away a bad result – like a 5-1 defeat to Sp*rs – and people were all ‘Aww, that’s ok Paolo’, and he’d rock up in a perfect Italian suit, sweep his magnificent hair to one side and that would make everything ok again.

I don’t quite know how it ended up because it segued into a dream where I was smuggling large amounts of drugs inside camels and I think I got found out when I was unable to convince the police that I was simply taking my pet Bactrian down O’Connell Street. Still, it was fun – and dishy – while it lasted.

Anyway, back to the real world and as we prepare to face Sp*rs at the weekend in what is one of the most critical derbies of recent times, Arsene Wenger has been discussing the futures of Mesut Ozil and Alexis Sanchez with beIN Sport. It’s clear the manager has some kind of contract with them, because every time there’s an Interlull he does an interview with them which they drip feed throughout the break.

If he’s not talking about his desire to continue as a manager, he’s expanding on his comments about Raheem Sterling diving and refereeing incompetence. In the latest clip he was specifically asked about the two star players, and said consideration would be given to selling them in the January window:

No decision has been made on that front. Do we let anyone go in January? We’ll have to think about that to see where we stand with them at the end of December.

It’s easier said that done, of course. With the prospect of a Bosman in June, the offer would have to be 100% right for the players who could just sit it out until summer and take their pick at that point. From an Arsenal point of view, it would obviously depend on the size of the potential fee, who was paying us that fee, and the availability of a replacement in the same month.

If you’re letting them go to get money in the bank to help replace them, fine, but if you’re doing it in the knowledge that you’re not going to be able to sign the player/players you want until the summer, then you’re weakening yourself considerably for the second half of the season. Regardless of what you think of their performances so far – and I think there have been some mitigating circumstances – you strip yourself of a lot of goals and a lot of assists without them.

I think now, with no injuries and no fitness issues, it’s time for them to step up and to start performing. I don’t think they’ve downed tools or anything like it, although the situation remains one that’s open to question a bit. I can also see why as a club we’d have to think about the future and how to balance the need to replace these players with the potential finances we have at our disposal and whether it might be easier if we had some extra money in the bank from a sale.

However, I do question the need to make it so public. I’m not sure what the benefit of that is. Our position with other clubs is already weak, this does nothing to strengthen that, and I wonder as well what it makes the players feel. If we’re demanding 100% commitment on the pitch – and rightly, because they are contracted until June – I don’t think raising the possibility of a January sale is particularly helpful.

Maybe it’s Wenger’s way of trying to get more out of them, but if it is it’s hardly his most effective media play. He’s been pretty consistent with both of them in public, backing them, their quality and their professionalism as he sees it, so this is definitely a change of tack. Let’s see if it has any effect at the weekend.

Meanwhile, after stories last week about the possibility of head scout Steve Rowley leaving the club, we’ve been linked with Borussia Dortmund’s scouting chief Sven Mislintat. Some reports from Germany suggest we’re in advanced talks with him, and it’d be a very interesting appointment if true.

If Rowley went and was replaced by this man, and a new ‘football executive’ was brought in to fill the gap left by Dick Law, that would be a significant and positive behind the scenes change. Right now, however, it’s all talk and links and names, but I sincerely hope that there’s something to all of this. The need to refresh, modernise and bring new ideas in behind the scenes is pressing – it has been for some time – so let’s keep fingers crossed this is the beginning of the restructuring that needs to take place during the course of this Arsene Wenger contract.

Finally for today, Jens Lehmann has got a book out. Yesterday some snippets emerged about his relationship with Manuel Almunia – competitive, to say the least – and his thoughts on former captain William Gallas. As someone who thoroughly disliked everything about Gallas during his time at the club, I very much enjoyed what Jens had to say about him, you can read that here.

And on that, we’ll have copies of Jens’ book to give away on tomorrow’s Arsecast, as well as a chat with Ian Wright, and lots more, so tune in for that. Subscribe now in iTunes or via your favourite podcast app to make sure you get it as soon as it’s released.

Right, we expect some pre-derby team news today, we’ll have that for you on Arseblog News. Tim Stillman will be here with his column later on, and I’ll be back tomorrow. Until then have a good one.