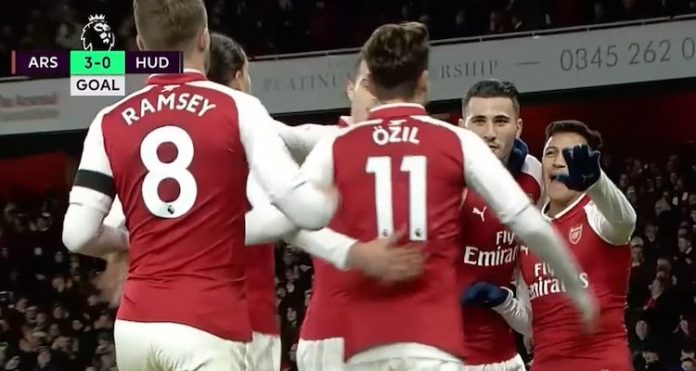 Arsenal made it seven wins from seven at home in the Premier League this season, and racked up the biggest win of the campaign thus far with a 5-0 hammering of Huddersfield last night. However, it wasn’t quite as one-sided as the scoreline suggests.

We opened the scoring in the third minute and the goal was a taste of what was to come. Lovely build up play saw Granit Xhaka feed Aaron Ramsey, and his clever flick sent Alexandre Lacazette through on goal. There’s a real confidence about the French international when he gets into positions like that, and his left-footed finish was excellent to put us ahead.

An early goal is always nice, but from there the game settled down and you could see why Huddersfield have impressed this season. Although we had plenty of the ball, we found it hard to make any real inroads once we got to the final third, the frustration of that summed up by a wild Xhaka effort from 35 yards which flew miles high and wide.

Then, towards the end of the first half it was as if all the Arsenal players took a sleeping pill, and we started giving the ball away carelessly, inviting pressure on ourselves. It lasted almost until the end of the first 45 minutes and we were lucky that we didn’t get punished for it.

Half-time would sort that, you thought, but there was more of the same in the early stages of the second period. Kolasinac was casual in possession and concentration which allowed Collin Quaner to drive into our box and only for a fantastic save from Petr Cech they’d have scored the equaliser.

At the other end Olivier Giroud, on at half-time for the injured Lacazette, hit the post and you could sense a bit of frustration beginning to build. We were pretty much on top, but a one goal lead is precarious and we needed someone to really get a hold of the game and drive us on.

In the end it was two people: Mesut Ozil and Aaron Ramsey. The former created the goal that doubled the lead, starting a move with a lovely flick on the wing, playing a one-two with Alexis on the edge of the box and squaring for Giroud who tucked the ball home at the near post. One of those goals whose sheer simplicity makes it beautiful.

The German got another assist a minute later, but don’t underestimate the part Ramsey played in the goal. His pass to set Ozil free down the inside-right channel was weighted to perfection, and when the cross came in Alexis was there to sweep the ball into the net and make sure of the three points.

Arsenal weren’t finished though, this time it was Ramsey who unpicked the lock, sending Ozil through on goal and his dinked finish over the keeper made it 4-0. Three goals in under four minutes added real gloss to the scoreline, but it was a period of play in which Arsenal were basically unstoppable.

If we talk about them taking a sleeping tablet towards the end of the first half, this was like someone had given them all a big bag of whizz, and the quality of the goals was really something. Perhaps Huddersfield’s heads went down after the second goal, but they just couldn’t live with what we were producing.

There was time for one more before the final whistle. Kolasinac reacted well to take the ball into the box and as it was dropping for him in front of goal with just the keeper to beat, Giroud took control and whacked in his second of the night to make it 5-0. On a cold night, the team provided some warmth for those chilling in the stands, and ahead of United on Saturday it was a very decent way to prepare.

Afterwards though, Arsene Wenger wasn’t blind to the fact that for quite a while his team weren’t as sharp as he’d have liked them to be, saying:

I felt that I was not pleased with everything, but we started well and I think after that we slowly lost a bit of our edge, the urgency in our game and a little bit as well in the second half we gave them one or two chances. We missed as well the second goal, but after that once we scored we played with freedom, with drive, with creativity and our link play became fantastic to watch in the last 20 minutes.

We played a bit inhibited and when we scored the second goal everybody was suddenly had more movement and passed the ball quicker, they struggled as well maybe and thought that was game over.

It does seem a bit churlish to focus on anything negative when you’ve won 5-0, and there is no prescribed way to get a big victory under your belt, but it’s good there’s some recognition of the fact that there was a period of the game when we should have done better and where our carelessness could have been costly.

At the same time though, it’s hard not to look at that flurry of goals and be anything other than hugely impressed at the way we injected some urgency and quality back into our game. Ozil stood out, obviously, with a goal and two assists, while Ramsey’s two assists and a key pass for the third goal mean his contribution shouldn’t be ignored.

It was another game without defeat for that back three and another clean sheet for Petr Cech – who drew pre-game praise from the manager – is a positive going into what’s going to be a more challenging game this weekend.

The only real negative was the fact that Alexandre Lacazette picked up a groin injury and will miss Saturday’s showdown with United. It’ll be interesting to see what Arsene Wenger does with his team. Giroud came on and scored twice, but in terms of the kind of football we’d want to play, the Frenchman remains a better option from the bench should we need him.

He could use Danny Welbeck up top against his old club, or play him on the left with Alexis as the striker, giving us a much more mobile front three, but he’s got a couple of days to consider his options. It’s something we’ll have a chat about on tomorrow’s Arsecast too, so join us for that.

In the meantime, check out our video page to enjoy some of last night again, we’ll have news and more reaction throughout the day on Arseblog News, and Tim Stillman will be here with his column later on.