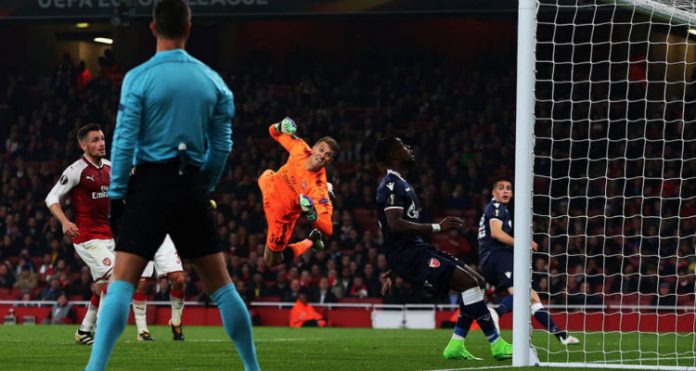 “Return of the Eddie” – that was supposed to be the title of this morning’s blog.

I had it all planned out in my head. Nketiah was going to come off the bench to score a late winner and I was going to spend 10 minutes of the morning photoshopping his face on Luke Skywalker’s body. I had visions of him holding a lightsaber in one hand, the match ball in the other and my accompanying intro paragraph describing his amazing individual winner, polished off with a controversial handball finish, was going to climax with the most fantastically convenient Star Wars pun.

In the end, Arsenal’s performance against Red Star Belgrade was as far from out of this world as you could possibly get.

Yes, we ticked Europa League qualification off our to-do list but the 0-0 draw, played out in front of a lot of empty seats at the Emirates, was instantly forgettable. You’ll struggle to watch a more drab game of football this season.

As expected Arsene Wenger kept faith with most of the squad that beat Norwich City in the Carabao Cup last week. That meant starts for Wilshere, Giroud and Walcott in attack, Coquelin and Willock in midfield, Maitland-Niles and Nelson on the flanks and Holding, Elneny and Debuchy at the back. In goal, Matt Macey made his European debut deputising for the injured David Ospina.

The 23-year-old keeper’s distribution was a bit dodgy in the opening stages but he more than made up for that with a couple of acrobatic saves late in the first half to preserve a clean sheet.

His performance impressed the boss, who noted afterwards:

“I think he took his chance very well, he is huge, he is quick and you do not often find combinations of that size and that speed, he is very agile as well for a guy who is tall like that.”

The gentleman’s agreement between Wenger and Ospina will probably see the Colombian return to the starting line-up against Cologne at the end of the month but Macey looks a decent bet to challenge Emi Martinez in the future.

Not much else happened in the opening 45 minutes. Jack Wilshere, at the centre of so much of the pre-game chat, looked very isolated out on the left and without his inventiveness, we struggled to click in the final third.

“He needs these kinds of games to come back to his best level and what Jack needs is to be injury free for a long period until the end of the season and get games like that.”

Visiting keeper Borjan did twice deny Giroud at close quarters but it spoke volumes that the loudest cheer of the half was reserved for him falling over while trying to throw the ball out.

It was more of the same after the break. Arsenal dominated possession, kept getting caught on the break and squandered the few half chances they created.

When we finally worked a clear-cut opportunity, Wilshere’s dinked effort, taken off the toes of Maitland-Niles, beat the keeper only to be spectacularly cleared off the line.

He was somewhat apologetic:

“I thought that was in. Ainsley probably won’t be happy with me as I took it off him, but I thought I could score. On another day it could have gone in, but it was great defending.”

I’m sure Jack can expect a visit from Ainsley’s mum.

It was interesting to watch Mohamed Elneny operating in the centre of defence again. He reads the game quite well, but his impatience seems to get the better of him.

Frustrated by Coquelin’s lack of invention/anything, and eager to get Arsenal pushing forward, he regularly roamed about the pitch looking for the ball. There was logic to his willingness to spray passes to the front men, but with his radar slightly off he often gave away possession. Despite that, deploying the Egyptian in defence is an experiment I think Wenger will keep trying. I’ve visions of him being our new Grimandi.

Jo Willock was solid, if unspectacular in midfield and Reiss Nelson looked bright when he dribbled at the Belgrade back line. He did lose his bearings a couple of times defensively, but at 17-years-old you can forgive that.

After the game, the boss had this to say:

“I think they started stronger than us, they played very well tonight. They played at a high pace, they were always dangerous on the breaks and they defended very well.

“In the second half I felt we dominated possession much more, played more in one half, but we lacked a bit of quality in the final ball, vision to find the right space and overall I must say it is a fair 0-0.”

The draw, coupled with Cologne’s 5-2 win over BATE Borisov, means we have a five point lead at the top of Group H. We’re through to the round of 32 where some interesting teams await. The likes of AC Milan, Lazio and Zenit St Petersburg are through already and there are some big names waiting to fall out of the Champions League. It’s a bit too early to start guessing who we’ll face in the next round, but the competition should heat up a bit.

In other news, Santi Cazorla has revealed to Marca that he’s had eight operations on his Achilles since October 2016 and that doctors feared they may have to amputate his foot after he contracted gangrene. The Spaniard now has skin from his arm, including a chunk of his tattoo, grafted onto his ankle. It looks awful. We’ll have the quotes from the interview, released later today, on Arseblog News.

We can only wish Santi all the best in his recovery. Nothing would make us happier than to see him in an Arsenal shirt again.

Right, that’s your lot for today. Blogs is currently gallivanting around Sydney at the moment, but he’ll be back tomorrow. Have a great weekend.