Arsenal’s fab front four finally got us an away win at Everton last week before a slightly more tamed performance against Swansea City brought another three points on Saturday. For the first time, Arsene Wenger started his three most expensive signings – Alexandre Lacazette, Mesut Ozil, Alexis Sanchez – together at Goodison Park and, along with Aaron Ramsey, they showed their class.

Heading into the game, Lacazette’s form home and away had nicely mirrored the team’s. The Frenchman had scored in each of Arsenal’s home Premier League games but hadn’t netted in the four away matches, where his team-mates found it harder to grasp control and find opportunities to combine with him.

At Everton, a smarter Arsenal helped bring out a smarter and more useful Lacazette. On the right we saw one of Ozil’s finest Arsenal performances, Alexis looked fired up and behind them all Ramsey pretty much knitted everything together with his exemplary movement.

The Welshman’s influence over the game was obvious from the opening stages, as was the way the front four (and they are a front four) dovetailed.

Arsenal’s first threatening attack came just two minutes into the game as Everton’s man-marking approach was ripped apart for the first time. With Michael Keane following Alexis Sanchez into the midfield, Ramsey saw an opportunity to move into the space behind the England defender. In turn, Alexis could twist and dribble into the space Ramsey created by dragging midfielder Nikola Vlasic with him. 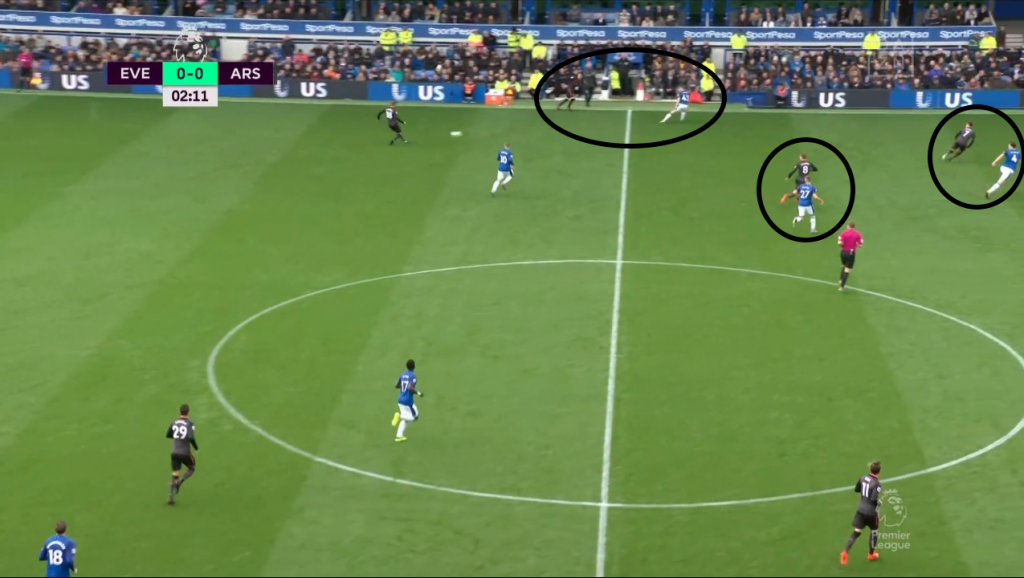 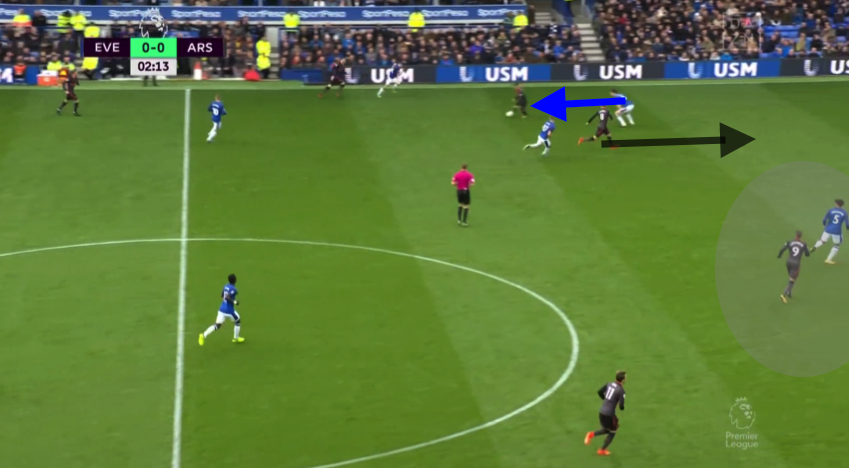 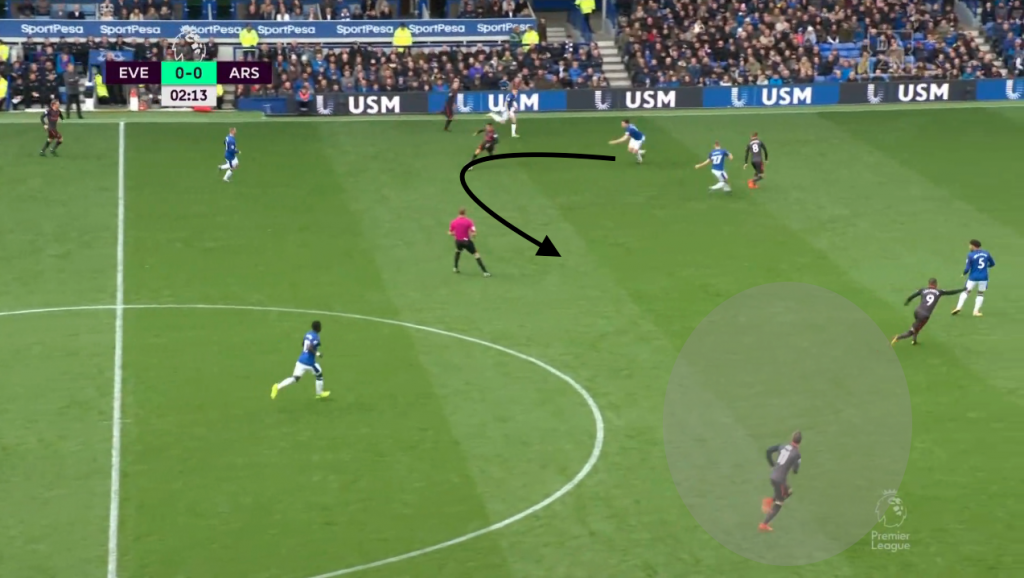 With Lacazette’s presence making Ashley Williams reluctant to move across, Ozil drifted into the space behind the French striker and, when the ball arrived, created a chance for Ramsey with the simplest of touches. Just like that, this felt like a different Arsenal.

These players have a brilliant understanding of the game and of each other when they’re on the front foot – Lacazette appears to be joining in with that well – and within two minutes Arsenal were more upbeat than in any other away performance this season.

There was another strikingly similar chance in the seventh minute, when a similar Alexis dribble and Lacazette run opened Everton up, but Jordan Pickford stood up to the test. Again, Alexis drove into the space created by a team-mate’s movement and laid the ball into Ozil, whose first time pass to Lacazette, who spun around the defence himself on that occasion, was ever so slightly wide.

On the break there were similar patterns – Arsenal’s best first-half chance came as Ramsey drove onto a ball Alexis laid off with his back to goal on the halfway line, sucking in Keane and taking him out of the game completely. On that occasion Lacazette saw a close-range effort saved. Ramsey and Alexis don’t appear to get on too well but their understanding on the pitch is fundamental to the team’s attacking play – they create the spaces each other thrives in and wants to be in.

Mesut Ozil’s goal to give Arsenal the lead showed yet more of the same great understanding and intelligent movement as the first half, just with the end result the team badly needed. Everton’s shape changed but the man-marking idea was still at the root of their defensive play and their defensive flaws.

With Alexis on the ball out wide, Lacazette intelligently stayed closed to him and made a run behind right-back Jonjoe Kenny. The young defender didn’t commit to Alexis, worried about the run behind him, and Idriss Gueye remained with Lacazette rather than helping Kenny deal with the Chilean.

Meanwhile in the box, Arsenal’s movement was perfect. This goal is a fantastic demonstration of how well Aaron Ramsey reads moves as they unfold and finds himself in space. Waiting for Mesut Ozil to make his near post run, Ramsey waits on the edge of Tom Davies’ peripheral vision before darting behind him into the space created by Ozil’s run.  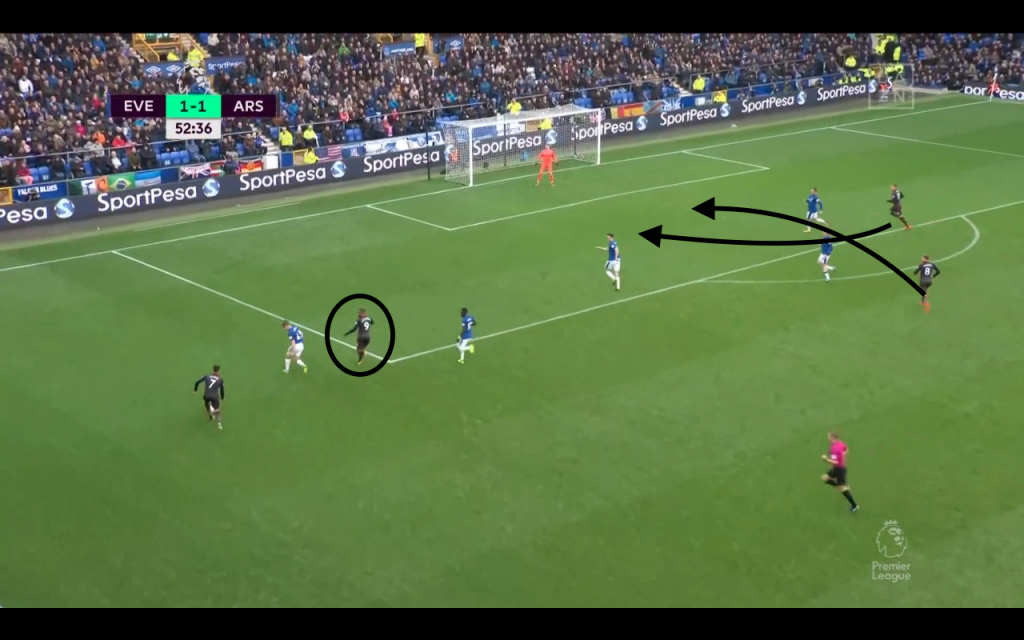 Just look where Ramsey ends up, unmarked and behind Ozil, waiting for a rebound or the cross to be overhit. This is the real threat of our brilliant midfielder and it’s the reason he has to keep getting into dangerous areas – his instincts are unbelievably good.

Of course, a little clever movement and a nicely timed Jack Wilshere pass saw Ramsey grab a goal for himself before the Everton game was over.

Moving on to Swansea and Arsenal encountered the familiar issue in home games, though they are much better at overcoming those. The movement between Ramsey and Alexis wasn’t possible as Swansea tucked in deep and didn’t follow men, preferring to remain in position and stop themselves from allowing gaps to be created.

Alexis would come deep for the ball, or move deeper with it, like usual but the midfield decided to pick him up throughout the first half, allowing the backline to sit tight. As we see below, there was no temptation to follow the Chilean, even though Ramsey (below the referee) has left the space on the left of midfield, and Arsenal found themselves a bit stifled. 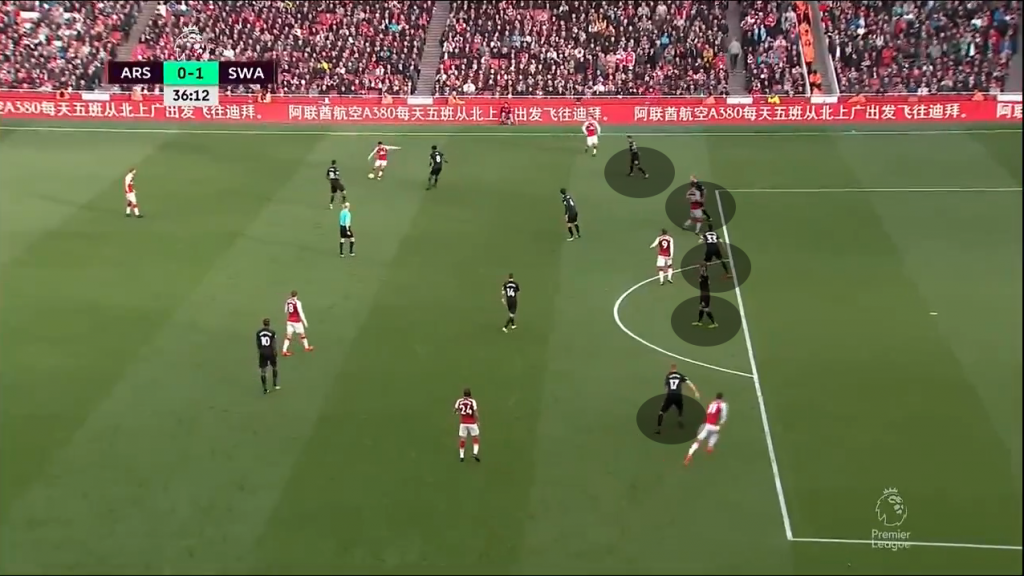 It is in these situations – tight home games – where the wing-backs become so important to the Arsenal system. With three centre-backs, there is freedom for Hector Bellerin and Sead Kolasinac to join in with the pitch, helping Arsenal outnumber sides on the wings and stretch them across the pitch.

“They blocked Hector (Bellerin) a lot on the right with Clucas, so it was important for us to build up quickly on the right and change quickly to the left and create some space for Kolasinac,” Wenger said after the game. A much more intricate half-time change of tact than most would expect from the manager.

Kolasinac broke free to smash home the equaliser after the break after Arsenal had indeed overloaded the right-hand side and left him in some space at the back post. With Swansea sitting so deep, Lacazette struggled to move or bind defenders as he had at Everton but he showed another attribute of his instead, combining brilliantly with Mesut Ozil. That the ball fell to Kolasinac was fortuitous but, once again, it was a chance the Arsenal forwards had earned with their understanding.

It wasn’t a coincidence, by the way, that Lacazette ran to get onside and Ramsey busted a gut to join him in case Kolasinac’s effort was parried. These Arsenal players are hungry for goals and the future success of the team – with or without the star duo of Ozil and Alexis – will depend on how many Lacazette and Ramsey manage to score.

This was proved true on Saturday too, with Ramsey netting the winner. Swansea finally fell into the trap of focusing on Alexis. Let him go and he could turn and do damage, so teams will always pay a little too much attention to him eventually, opening spaces up elsewhere. That’s exactly what happened, allowing Granit Xhaka to do what he does best and find Kolasinac with a lovely chipped ball. 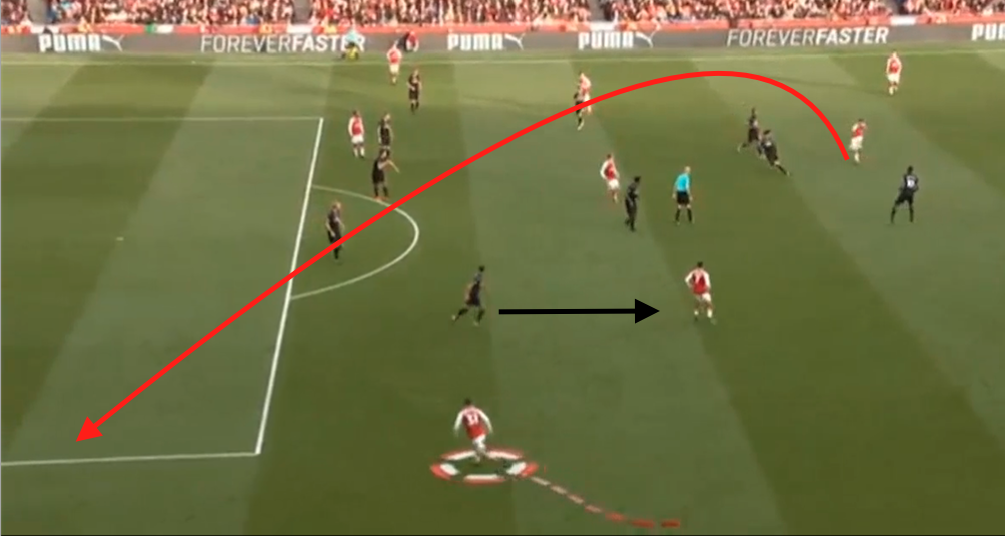 As Swansea’s defence shifted to close down the Bosnian, Ramsey appeared in the space that was created yet again and slid the ball home. Kolasinac, perhaps unlike Bellerin on the opposite side, has incredible efficiency when he gets into these positions and was brilliant to pick Ramsey out.

It is so important that Arsenal keep getting Alexis to drop into these spaces just off the defence, whether he attracts a centre-back or a fullback with him it creates huge spaces and opportunities for the team.

With the wingbacks joining in at home, we can make this system work perfectly for our talented frontline. Away from home the defence can remain a bit more conservative and we have the movement, guile and understanding to create chances and grab games a little better than so far this season, forcing our hosts back into their own half out of fear and avoiding the issues Tim Stillman detailed here.

With Alexis at the heart of a lot of our play, even when he isn’t touching the ball, and Ozil recording the most creative game of the Premier League season so far against Everton, Arsene Wenger has big questions to answer.

The Frenchman has admitted one or both could leave the club in January – probably something the club would do to prevent them from joining English clubs – but selling them now is a tough call to make. Their fees would be a fraction of their true values and they are most likely the difference between making the Champions League or not, which is worth £30m or so in itself.

That’s another £30m that could go towards replacing them in the summer and Champions League football would definitely make it easier to sign players of the calibre that will be required.

With both of them in the side again, Arsenal can start to improve against better sides than a desperate Everton, who tried to press but couldn’t pull it off as the movement and interplay from the front four was too sharp.

Despite a hit and miss start to the season, we have won 13 home games in a row in all competitions (a stadium record) and finally have all our best players out on the pitch together. Let’s keep them, have a bit of fun and see what – along with Ramsey and Lacazette – they can conjure up between now and the end of May.