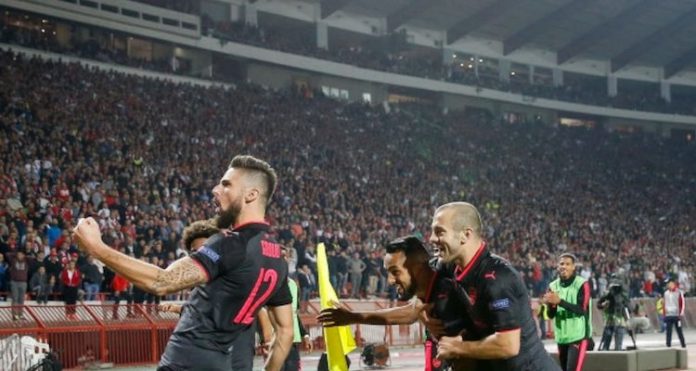 Having declared the Europa League ‘fun’ this week, I feel I must take full responsibility for last night’s rather dull affair. Mea culpa, and all that. Even though the team was pretty similar to the one that enjoyed such larks in Borisov, it lacked the spark of a few weeks ago, and what we got was around 85 minutes of low quality fare, before Olivier Giroud’s superb goal provided us with something to get excited about.

I had no issues with the line-up really. The manager’s hand was forced by Sunday’s trip to Everton, a shortage of centre-halves, and the fact we’ve got another game next Tuesday in the Carabao Cup, so although you wouldn’t necessarily say a back three of Mathieu Debuchy (risen from the dead), Mohamed Elneny and Rob Holding was ideal, there wasn’t a lot else he could do.

He had two youngsters out of position at wing-back, and although Reiss Nelson and Ainsley Maitland-Niles work hard, it’s clear they struggle to showcase their talent when playing there. The former showed sparks of what he can do when he got into their final third, while the latter’s defensive midfield awareness and pace was necessary a few times as the home side tried, but failed, to get in behind.

Alongside a rusty Francis Coquelin, Joe Willock put in an unshowy but assured central midfield performance, and while Jack Wilshere always looked a cut above, it would fair to say that Olivier Giroud and Theo Walcott failed to trouble the Serbian side from an attacking point of view.

Walcott missed a good chance in the first half, and Petr Cech had to be alert a couple of times as our defensive set-up was tested, if not overly exposed. Looking at the Arsenal bench to see how we might change things wasn’t really an option either. Only Chuba Akpom had any first team experience, and even then he’s hardly going to fill you with confidence that he could get a goal.

So Arsenal huffed and puffed with a lot of the ball. Red Star looked to hit us on the counter but their few efforts were relatively easily rebuffed – although Elneny did his best to liven up proceedings by playing a back-pass so woeful that the normally unruffled Cech couldn’t help but give him a flea in the ear about it.

Red Star went down to 10 men after Coquelin was caught in the face by a stray, but seemingly accidental, elbow which did give us a little more momentum going into the final few minutes, but as the game wound down towards what felt like an inevitable 0-0, Wilshere’s drive and invention, Walcott’s movement and Giroud’s acrobatics provided this:

Was it worth sitting through 85 minutes of drudgery for that? I’m not sure, but that’s not really how it works anyway. It was a superb goal.

We know that the HFB has got that kind of thing in his locker, and it’s not the first time we’ve scored from that kind of one-touch passing around the box, and when you look back on them Wilshere tends to be involved. There was obviously his incredible strike against Norwich, but he also played a part in a similar strike for Tomas Rosicky against Sunderland a few years ago.

Afterwards, Arsene Wenger revealed that Giroud is not only capable of net-bulging nimbleness, he’s also something of a clairvoyant:

At some stage he came to the touchline and told me we will score. That’s Giroud, he keeps belief when it’s tough. That’s why he scores at moments you do not expect him to score.

I mean, fair play to him to have that belief, because watching the game last night if you’d told me we could play for a hundred hours I don’t think I’d have backed us to make the breakthrough, but I guess even on our slowest nights there’s always enough quality to pull a match-winning rabbit out of the hat, and Giroud did just that.

It means that our 100% record in the Europa League this season remains intact, and that we did it without having to use some of our so-called ‘first team’. This was very much a second string selection last night, and while probably only Wilshere did enough to give Wenger something to think about it when it comes to Sunday, it was a case of getting the job done and we did that.

We can now turn our attention to Sunday, and there are obviously things that the manager has to consider before our trip to Everton. I’m not sure there’s the scope to make the kind of changes people might like to see, particularly in respect of some of those culpable for the Watford defeat being made to pay with their place in the team, but that’s something we can discuss in greater detail over the course of the next couple of days.

There’s a story in the Mirror this morning about how he’s told his teammates he’s going to sign for Man United. To me this sounds like the kind of story that might make his departure to a different club in January, perhaps one abroad, seem more palatable. He may well want United and United may well want him, but if he’s being that indiscreet about it, it will inform how he’s used.

I suspect, given how brand conscious he is, he’s unlikely be running his mouth off like that, but then I guess you never know with footballers. It does feel a bit like the club briefing against him though, and whatever the truth of the situation, it’s beginning to feel like a really unhealthy one.

Wenger has already begun to diminish our dependence on him, so it’ll be interesting to see how involved he is over the coming months. I can’t see us sanctioning a sale to United in January, so it could run until next summer if there are no other options.

Some will say we should have pulled the trigger during the summer, but from what I understand there weren’t too many people knocking down the door with their chequebooks in hand, and our difficulties in moving players have been obvious for years.

The story from earlier this week in which Robert Pires revealed Ozil’s anger at the club’s inability/unwillingness to add real quality was an interesting one. Whatever you think about Ozil, it’s hard not to sympathise with that point of view.

Still, it’s just another fine mess we’ve gotten ourselves into.

I’ll leave you this morning with an Arsecast in which I chat to Tim Stillman about Ozil, Europa League, Jack Wilshere knocking on the ‘first team’ door, as well as getting an Everton perspective on Sunday’s trip to Goodison Park and lots more. Listen/subscribe below.