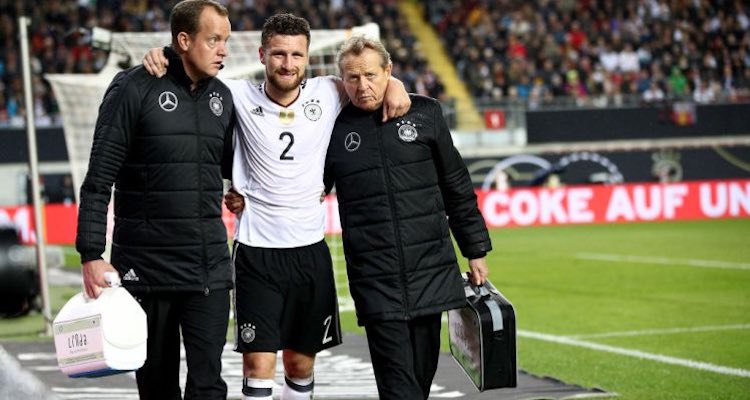 One of the reasons we used to fear the Interlull was the possibility of a player picking up an injury. It seemed to happen with monotonous regularity in the past, but in recent times we’ve had pretty good run. Even when Alexis goes away and is pictured with his thighs bandaged to kingdom come, we haven’t had the ‘Oh crap’ moment.

Perhaps it’s good fortune, perhaps it’s a measure of the improvement we’ve made in terms of injury prevention – the use a of cryotherapy chamber for instance, and the work put in by Shad Forsythe and his team over the last few years. However, last night it looks like Shkodran Mustafi picked up a pretty serious problem, pulling up sharply and clutching his thigh during Germany’s win over Azerbaijan.

It has all the signs of a bad injury, and afterwards German coach Joachim Löw said:

With Mustafi it seems that it is some muscle tear or some muscle fibre tear. In any case it could force him to a long break.

Obviously we’ll have to wait and see exactly how long he’s going to be out for, but given the way he reacted it looks like one that goes a bit beyond the basic muscle tear. A mild strain will leave a player sidelined for three weeks; serious muscle tears can see them miss months. I recall a Lukas Podolski hamstring strain picked up in August 2013 which saw him out of action for four months. He didn’t return until late December.

Now, that’s probably worst case scenario, but I think we’ll be very fortunate if Mustafi is available again in a matter of weeks, and of course it gives Arsene Wenger some thinking to do about his team. Despite the summer goings-on – which saw the former Valencia man made available for transfer – he’s been used regularly as the anchor man in the back three, with Monreal and Koscielny or Holding outside him.

The obvious replacement is Per Mertesacker, with that role seemingly perfect for the captain. He can organise, isn’t asked to cover the wide open spaces, and his reading of the game from that position can help him make up for the legs which maybe aren’t quite what they used to be.

Koscielny is another candidate too but there are obviously some injury worries over him. He missed the games against BATE Borisov and Brighton, and there’s clearly a need to treat him with kid gloves. He revealed last season he requires daily treatment for an ongoing Achilles tendon issue, so there’s probably only so far you can push him without running the risk of doing him some serious damage.

I’m not sure of the fitness status of Calum Chambers who took a hip problem into the new season, then aggravated that in his first appearance – lasting just 45 minutes against Doncaster in the Carabao Cup. Hopefully he’s close enough to a return, because with seven games between October 14th and November 5th – when we break for the next Interlull – there’s a lot of football to play and the manager is going to have to manage his squad carefully.

Not least because the final game before that break is a trip to face Man City, and the first one back a North London derby at home. So, fingers crossed that Mustafi isn’t as badly injured as he appears to be, and that whoever is left on international duty comes back safe and sound.

From what I can see based on the fixtures that includes Aaron Ramsey, Nacho Monreal, Alexandre Lacazette, Olivier Giroud, Granit Xhaka, Alexis Sanchez, and David Ospina. So certainly some very important first team players in there. May the injury Gods look favourably on us tonight and tomorrow night.

What you would say is that given the fixtures we have between now and Man City, there ought to be enough in the squad to cope without Mustafi. Taking nothing granted, of course, but if there is a right time to get injured (there isn’t) then this is it (although it’s not). If you see what I mean.

Speaking of fitness, Jack Wilshere says he’s feeling good as he makes his way back from the broken leg he suffered last season for Bournemouth. In fact, he suggests he’s the fittest of all time:

My fitness levels, if I’m honest, are probably the best they’ve ever been.

Quite a claim, but one I hope he can back up with performances and availability. When he’s match fit – and I think this is the key thing – he has qualities that nobody else in our midfield possesses. And with that run of games over the next three weeks, there’s going to be plenty of opportunities for him to play and get games under his belt.

Right, that’s that for this morning. James and I will have an Arsecast Extra for you, but we’re not recording until later this evening, so it probably won’t be available until around 10pm tonight. I realise that’s tomorrow in some places, but there you go.