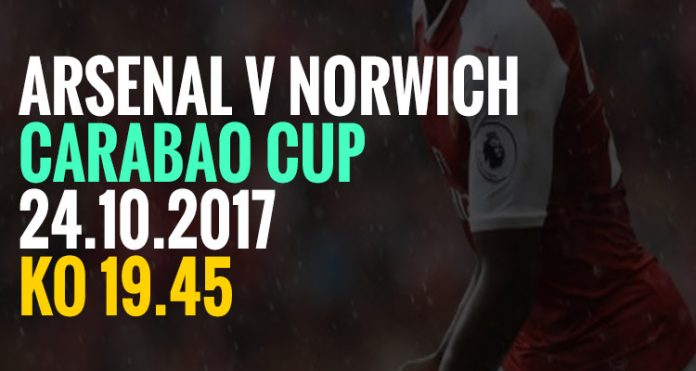 We play our second game in 48 hours this evening with a Carabao Cup tie against Norwich City.

Having just played on Sunday, Arsene Wenger will be rotating the shite out of his squad for this one I reckon, and I suspect we won’t see anyone who started at Goodison Park starting tonight. As effective as we were against Everton, there’s a Premier League encounter with Swansea at the weekend to consider, and we’re basically running two separate teams for this competition and the Europa League.

It probably means a bit of a swing in terms of performance, but there’s no other way around it, and thankfully we do have the depth to do that. Especially up front, something the manager touched on in the build up to tonight’s game.

He’ll be turning to Olivier Giroud, Theo Walcott, Alex Iwobi and possibly Jack Wilshere tonight, and on that he says:

“That’s the luxury I have at the moment and the difficulty I have as well. All these players do well, play well and they deserve to play. Fortunately, we have important games every week, so I can give competition to everybody.

“We have so much offensive force on the bench as well. It’s really a strong point of the club at the moment.”

Whether he uses Wilshere or not, or where he uses him, will be interesting. Iwobi, Walcott, Giroud would make up a nice front three for tonight, and with Francis Coquelin and Joe Willock ready to pick up where they left off from the Europa League win over Red Star Belgrade, is there room for Jack in the engine room? Does Wenger want to play him there, as all his starts this season have come further forward?

I think though, after a few starts and a relatively relaxed Premier League cameo on Sunday, tonight is a good chance to see Jack in the middle where he’s played most of his football. There are calls for him to come back into the side on a more regular basis, but questions do remain about his stamina, match fitness, and readiness to play there in the league – so giving him the nod in there tonight would be one way of finding that out. Willock could be the one to miss out in that case.

I think we could see the same back five that played in Serbia, and the only other selection issue is who plays in goal. With David Ospina injured, it opens the door for Matt Macey to make his competitive debut for the club. There’s no way he risk Cech, so he has to plump for one his young keepers and Macey looks to be top of that particular list.

It won’t be an easy game by any means, Norwich are currently 6th in the Championship and haven’t lost a game since the end of August. They’ll come to the Emirates knowing they’ve got nothing to lose, and it should make for an interesting game. Let’s hope we’ve got enough in reserve to see them off.

Meanwhile, Ronald Koeman got sacked after the 5-2 defeat to Everton. That’s a shame for him.

Interesting stuff from Jack Wilshere who says he’s started doing his coaching badges. Leaving ‘smart’ comments aside about how he’s planning for retirement, I think this is a good thing. He’s doing them alongside Per Mertesacker, who’ll take over as Academy Manager at the end of the season, and the BFG says:

Footballers are routinely criticised for, well, almost everything you can think of, and there have been questions about Wilshere down the years and how perhaps his off field behaviour hasn’t always been as solid as it should have been. Listening to him recently though, you get the sense he’s really aware of how short a player’s career is, and if this gives him greater insight into the game while he’s still playing then credit to him for taking it on at this early stage.

Almost finally for today, congratulations to Olivier Giroud who won the Puskas Award for the best goal of the year at the FIFA Football Awards for Footballers Who Deserve Awards Awards last night. The strike in question was the Scorpion Kick against Crystal Palace last season.

Perhaps lost a bit is the fact that not only was it an amazing finish, it capped off what was a fantastic team move, not least Giroud’s little flick in midfield to keep it going. Definitely one to watch again:

Finally for this morning, I’ll leave you with yesterday’s Arsecast Extra which was recorded before Koeman’s sacking but which still takes some delight in seeing him look so forlorn on the sideline as the Gunners smashed in five against his Everton side. We also discuss the roles of Ozil and Sanchez, that front three, Granit Xhaka, and lots more including some very strange forehead art that James was spotted with by an eagle-eyed listener.

All the download/streaming links are below, and we’ll have all the news and Carabao Cup stuff on Arseblog News. Till tomorrow.