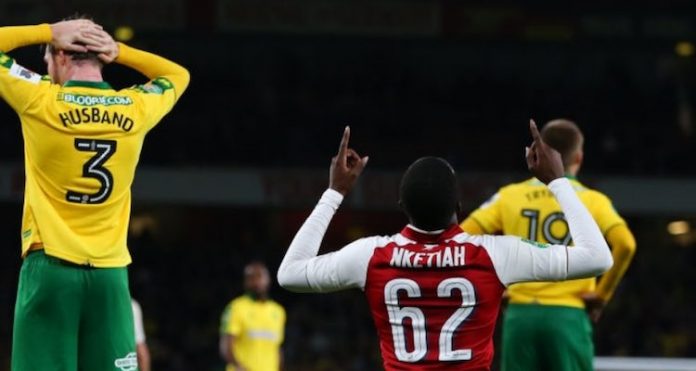 It would be reasonable to say that for 85 minutes the performance against Norwich was not one that would live long in the memory. It wasn’t even bad enough to be distinctive – like that time I ordered a burger in a bar and they literally just gave me a burger, no bun, just a splodge of dry, overcooked meat. With some peas beside it on the plate.

We huffed and puffed, then puffed and huffed, and after 35 minutes we went behind when some lad played some chap called Murphy got through and in direct contravention to the law that is named after him it didn’t go wrong and he chipped Matt Macey to make it 1-0 to Norwich.

After that it seemed to be some kind of weird art installation where Theo Walcott and Francis Coquelin took turns to see who could be most frustrating.

Theo: “Look at me. I am offside for the millionth time!”

Coquelin, booting a cross-field pass out of play for a Norwich throw: “Hold my beer!”

It looked like this was it for our Carabao Cup run. We didn’t create very much, the keeper’s most decisive action was in the first half when he saved from Rob Holding, and time was running out. Arsene Wenger had put on Chuba Akpom for Maitland-Niles but people were getting restless.

Not me though. I had a feeling. I knew something was cooking, and I said as much with more than 20 minutes of the game still to go:

Don’t worry, Eddie Nketiah will come on to save the day

I was expecting his introduction a bit earlier, but with just over 5 minutes left Arsene Wenger threw on the 18 year old as we prepared to take a corner. The youngster’s first touch was to poke the ball home from close range to equalise and ultimately send the game into extra-time.

In the first half of that, another Walcott corner found Nketiah and his leap and header into the top corner was genuinely fantastic. When you look at the size of him and the size of the opposition, the timing and technique required was just brilliant and the crowd’s chants of ‘Eddie! Eddie!’ made coming from behind even more fun.

There’s something wonderful about seeing a young player have that kind of impact in a game. It made up for most of what came before it, which was pretty woeful in fairness, and at a time when we’re all desperate for something different, this young man provided two moments which he’ll treasure and which will hopefully be just the beginning of what he contributes to the club.

Life gives chances to young people. We hope he has a proud career. Giving chances to young players is part of what this club is about. He showed great anticipation in the box to score and that’s a quality that you cannot teach at that age.

I like the second goal that he scored because he’s not tall and he got very high – it shows that he’s a guy who wants it.

I wonder will he, his impact, and the overall performance, change the manager’s outlook a bit. He spoke previously about how this was a competition which allowed him to play the senior players who find themselves on the fringe of the first team, but ultimately they had to be rescued by one of the club’s emerging talents – something much more in line with how he’s used players in the League Cup before.

What we should say, however, is that this season – given this competition and the Europa League – Wenger is managing two distinct teams. What we can do in the Premier League with the likes of Ozil, Alexis and Lacazette is much more difficult to replicate when you’re playing the likes of Iwobi, Walcott and Giroud. There’s a quality gap which varies, of course, but they’re also different kinds of players, so it can’t be easy.

There were no senior options on the bench, something he was asked about afterwards, making the point:

The boy Eddie is a good example. I just said that if I had experienced players on the bench, strikers for example, I would certainly in the end have put them on and not Eddie. Here you have no chance to put an experienced player on, so you try to find a young player who can give you a chance. If we speak about Eddie, it is because there was no experienced striker on the bench.

So, it is a balancing act, and one that might well be frustrating. However, even if the performances in Belgrade and last night weren’t brilliant overall, we’ve had superb climaxes that everyone should enjoy. Giroud’s brilliant goal against Red Star, and now the introduction of a youngster whose goals added real energy to the stadium and everyone watching last night. If that’s the trade off, it’s not a bad one.

Right, that’s that from me for now. I’m off to Australia this morning, and a reminder for Gooners in Melbourne and Sydney that I’ll be appearing at the Sports Writers Festival – details of events and tickets here. I’ll leave you in the company of Andrew Allen tomorrow, but after that I should blogging at upside-down o’clock once I get my head around time zones.

There’ll be more reaction to last night over on Arseblog News: Voice-over bloke voice: “It’s all Eddie, all the time”.