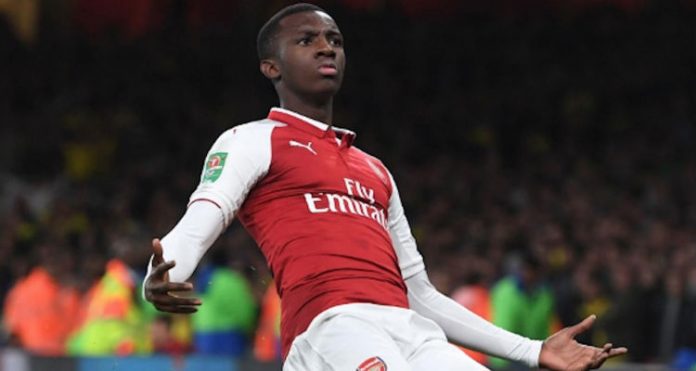 As I strolled towards Finsbury Park on Tuesday night, chants of “Eddie! Eddie! Eddie!” still wafting through the air, I overheard two boys chatting.

“That was the best 90 minutes of my life,” the little one, no older than six, said to the bigger one.

I didn’t catch the rest as I bound past The Auld Triangle, eyes lusting at the Twitter stream of Walcott-related fury on my phone. But the innocence of the exchange has stuck with me.

Not long before Nketiah took to the field on Tuesday night, I mentioned to my mum and dad, sitting next to me, that the prospect of a late equaliser and 30 minutes of extra time was enough to make me do a bit of sick in my mouth.

The game had been awful, possibly even worse than awful, and while I’m always intrigued by how our latest generation of Academy graduates might fair, I’m also weirdly embarrassed and uncomfortable when the senior stars look like they’ve tied their shoelaces together and binged on single malt.

I felt I’d done my duty by turning up, done more than my duty by not throwing a trident at Coquelin for his thirtieth misplaced pass and had made my peace at the fact this wasn’t going to be the year Arsene broke his League Cup duck.

Realism kicked in. Nobody enjoys an open top bus parade at the end of February anyway. We can focus on the league instead. At least nobody got injured.

That type of thing.

Eventually, the clock reached 85 minutes and Wenger decided to chuck on yet another striker; this one sporting number 62. I think Eddie was pointing to the sky in prayer while simultaneously running to take up a position for the corner when a guy behind me screamed, “You…yeah, you. Score! Score a goal!”

The simplicity of the command had everyone in the rows around us chuckling. He didn’t even know his name.

And then Eddie scored. Of course, he bloody did. With his first kick. On his home debut. At the age of 18 years, five months and five days.

The guy in the row behind went ballistic. I guess we all did. And then we congratulated the stranger on his Zeus-like powers. Because that’s what you do in situations like that, even though you know he, sitting in the North Bank upper tier, had literally nothing to do with why the ball ended up in the net.

After that, extra-time didn’t seem so bad a prospect. In the short interval before the re-start I worked out that I was old enough to be Eddie’s dad, which, for a 34-year-old in denial that he might not make it as a professional footballer, was a bitter pill to swallow.

The rest is history.

It wasn’t the best 90, or indeed, 120 minutes of my life. But on reflection, it was far more fun than I maybe realised at the time. Sometimes it’s good to organise your thoughts on paper.

So a tip of the cap to Eddie. And cheers to the two kids, who unintentionally reminded me that I shouldn’t be such a cynical, grumpy git ALL the time.

Unfortunately, I suspect that feeling won’t last too long as Arsenal hold their AGM today – the side to football you don’t care about when you’re 6-years-old.

Stan will be making an appearance, flanked by his son Josh, and presumably, the likes of Sir Chips, Lord Harris, Ken Friar, Ivan and Arsene will also be present.

Yesterday, the AST called on all their members and individual shareholders to vote against the re-appointment of Sir Chips Keswick and Josh Kroenke to the Board of Directors. The symbolic gesture is being made to highlight dissatisfaction at the current ownership and governance arrangements.

Fair enough. It’s just a shame it’s only symbolic. Obviously, with a 67% shareholding, Stan has the upper hand and there’s not much more the rest of us can do. In an interview with the Telegraph’s Jeremy Wilson, obviously done to outline his stance before the AGM, the American has pretty much said as much.

“We get into these things to try to grow them,” he said. “You don’t see us selling things. You just don’t. We are committed long-term.”

And in case you thought our second-largest shareholder Alisher Usmanov had a chance of persuading him to sell up, there’s was a further emphatic rebuttal.

“No. Absolutely not. That’s just not our model. “I’m at a stage in life where…what good does that do? I love Arsenal, love being involved with Arsenal.”

Just to make it utterly clear he doesn’t need the money that might come with a sale, he added: “There’s so many easier ways to make money, I can assure you. Much, much easier.”

Stan stops just short of going full Marie Antoinette on the Arsenal fans but he did attach the term ‘rabid’ to sports supporters. An odd choice of word. Certainly not one out of Ivan’s dictionary of marketing platitudes. That said the overall tone very much echoes what you’d expect from our CEO.

Let’s see what the AGM throws up, Tim Stillman will be posting his take on proceedings for Arseblog News later this evening.

I can’t tell for sure at the moment, but Arsene’s pre-Swansea press conference could also be today. He sometimes holds it at the Emirates before the AGM. If that’s the case, we’ll have all the team news on Arseblog News for you. Update – his press conference is at 2.15pm.

Elsewhere, a report in Spanish newspaper Sport has linked us with Barcelona’s former director of football Raul Sanllehi. It’s suggested he could fill a Dick Law shaped hole at London Colney. While details seem thin on the ground, it’s one to keep an eye on. Following the links with Marc Overmars a couple of weeks ago, you get the feeling there’s movement on that front.

Right, that’s your lot from me. Blogs is due to touch down in Melbourne very soon. Assuming he’s not completely bollixed by jet lag he should be back tomorrow.

Have an above average Thursday. Or Friday, if you’re Down Under.