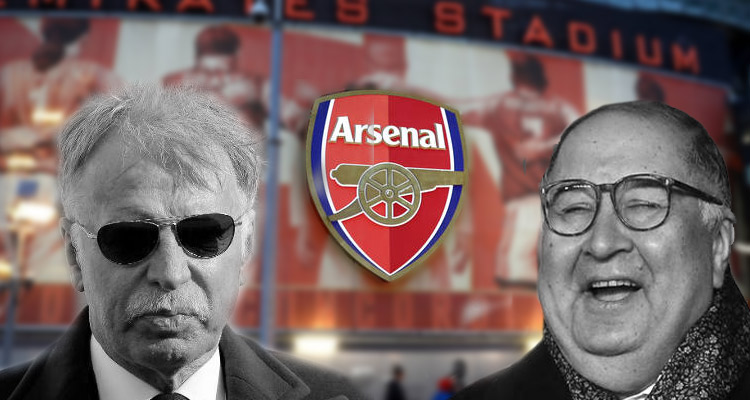 My routine – such at it is – when it comes to this blog is to get up in the morning, sit down at my desk with some coffee, and write about whatever occurs to me. Sometimes it’s obvious, the morning after a match for example. Other times, not so much. It can be quiet, mid-summer, during an Interlull, and you end up with something like this.

I rarely ever plan stuff. There are mornings when I wake up with something on my mind, or quite often I wake up with the first line of the blog rattling around in there, and if that’s the case I go with it, for who am I to take agin my own brain?

However, as we have an Interlull coming up, I was thinking about writing something about Arsenal’s ownership situation. I don’t know quite what, but I had a general sense of it, like a picture of it. It’s hard to explain, but if I could think of a couple of words that might describe that picture I think I’d use ‘bleak’, ‘dismay’, and ‘barren’. I think as descriptors they work well.

I started supporting Arsenal as kid, I don’t remember ever making the conscious decision to do it, but I did and I have no regrets. To me Arsenal was obviously a real thing but also something ethereal, something special. I remember when I was about 7 or 8, I used the telephone at home where we lived in Yorkshire and I rang the number that was on the top of the Arsenal page in the Observer Football Handbook I had.

“Hello Arsenal Football Club?”, she said, and I was speechless because it was Arsenal, then panicked because it cost money to make calls outside your local area and I was afraid I’d be rumbled so I hung up. I found that handbook up in my dad’s house recently, here is that very page marked with my own scribbles and doodles.

Since I was a kid this club has meant something more to me than being just the team I support. As you grow up you get more cynical, of course, and you realise there are more important things in life, but there’s still a very tiny bit of that kid left. I see things like this and it makes me proud. It makes me happy that as an institution they work with the community, do things to improve the lives of kids, break down barriers and so much more, and then I think about the two men who own most of the shares and I wonder how on earth we got here.

I mean, we all know but it doesn’t make it any easier to take. Modern football, modern sport, big business, television revenue, sponsorship, branding and wherever there are those things there are the men who have the money and the ego and the everything else, but in our case we’ve been landed with two of the worst people out there.

At the time of the Great Battle of Arsenal, when David Dein engineered a situation where it was touch and go as to whether Stan Kroenke or Alisher Usmanov would be the man to take control, I came down on the side of the American. It was very much a case of picking the least worst option, and to me he was that.

Usmanov’s past, which I can’t go into for fear of further legal communication from his high-priced lawyers, and his business methods – is there such a thing as a fair and equitable oligarch? – made him a man I didn’t want to be associated with Arsenal Football Club. Not the Arsenal Football Club I want it to be at least.

Kroenke’s hands-off approach appeared, at first, to be the right thing. To let a club that had very clear ideas of how it should be run, financially and footballistically (if we can use that particularly Wengerism), to continue on the path it had gone down. Self-sufficient, preparing itself for Financial Fair Play, and getting ready to ‘compete with the likes of Bayern Munich’.

Stan, silent Stan, remained far away, and that was good, because what did he know about running a football club anyway? Some took his silence on face value, that’s just the kind of man he is, but over time it has become clear that the silence is calculated and deliberate. We’ve heard, maybe twice or three times, via back channels and some selected journalists, that Kroenke has a great desire for Arsenal to be successful.

That’s open ended though, depending on your definition of what success is. Is it trophies? It is competing at the highest level on the football pitch? Is it winning the league? Or is it something else? Is success measured by the balance sheet? By the share price? By the value of the property, the assets, and the club as a whole?

I think it’s the latter for Stan Kroenke. I think he’s silent because he can’t come out and say he wants to win things because he doesn’t really care if we do or not. As long as the financial side of his investment – and remember he has never put one penny into the club itself – remains on an upward trajectory, he’s happy. With TV deals, and everything else, that’s unlikely to change significantly over the next few years regardless of what happens on the pitch.

Sure, attendances might go down, but there’s always churn, there’s always that season ticket waiting list, and when more of your money comes from revenues aside from tickets you can deal with that. Swings and roundabouts, ups and downs, it’s part of sport. Certainly as Kroenke knows that, because when you look at his US ‘franchises’ there’s a very common thread. They’re average, mediocre, and he presides over all of that because that is the kind of owner he is.

All of which makes the story we ran yesterday about how Kroenke has made a bid for the shares of Alisher Usmanov very worrying. Were the Russian to sell, the American would own over 97% of the shares, and would then be able to make a compulsory purchase of all the other shares and de-list.

Some will ask what difference that would make, as Kroenke already has control over what happens. It would mean no more AGM; it would mean he could register Arsenal in the US (probably Delaware because of corportation tax laws, and this is where other KSE holdings are); it would mean what little transparency and accountability we have right now is gone; and it would mean that he could, if he wanted, use Arsenal’s value and assets as leverage for his other business.

Angry of N5 has a good blog on that here. In short, it would be end of Arsenal as most of us have known it our whole lives.

Hang on though, what about being privately owned is so bad? Look at Chelsea and Roman Abramovich!

True, but as much as I find Abramovich contemptible for very obvious reasons, at least he has demonstrated a desire for his football team to be successful. He attends matches, his invests in the club, he ruthlessly pursues trophies and championships, he fires managers even if they win things because they haven’t won the right things or won them well enough.

It may not be what some consider decent, but it works for him. Not once have we ever seen anything like that from Kroenke. Nor would we. It’s not what he’s about. So, the next question is: would Usmanov sell?

I think he might. I think, having been turned down more than once by Kroenke, he knows the American is going nowhere, and that he currently holds 30.04% of something he can do nothing with. Sure, the share value might increase and boost his wealth, but it’s a pittance compared to the rest of his investments. He’s not in football for the cash, he’s in it for the visibility, for the veneer of respectability it gives men like him and Abramovich, and he’s now emasculated completely at Arsenal.

His former business partner, Farhad Moshiri, bought 49.9% of Everton last year. One of Usmanov’s companies has just done a five year deal to sponsor their training ground. You don’t need to be a genius to join the dots here.

And here’s the kicker: even if some white knight came along and bought Usmanov’s shares, Kroenke wouldn’t let them on the board anyway. So who is going to spend that much money to become a dead duck? Nobody. Which leaves Usmanov only one option if he wants to be the Premier League man he wants to be, and that’s to sell up and re-invest in Everton.

It is possible that he could, if he were willing to write off that amount of money and stick it to Stan, put his shareholding in some kind of trust over which he had no control, which would then allow him to avoid conflict of interest rules, but that seems like a very long shot. Anyway, Usmanov is no philanthropist, and in reality the only reason he seems like a good alternative to Kroenke is because he’s not Kroenke. Not because he’s the right man to own Arsenal.

So, here we are. This football club all of us have grown up with is owned by two men. An American, a donor to the most divisive US president of my lifetime, whose fortune is built on horrendous, heartless business practices; and a Russian, a willing supplicant to Vladimir Putin’s regime, whose own history is littered with scandal and unpleasantness (again I’m choosing my words carefully here). How are these two men the ones who own something I love?

I know people will say there are no nice billionaires, that this is the reality of the world we live in, and I get it. I understand. I didn’t come down in the last shower. It’s quite funny to see Everton fans rejoicing at the idea of Usmanov taking over, because it’s clear they don’t care about his past, only his money. Maybe that’s the way to keep going, but for me – and I can only speak for myself – I find that stuff impossible to overlook.

I believe Kroenke owning 100% of the shares would be an absolute disaster for this football clib. I find it hard to stomach that in some ways Usmanov has to be seen as a kind of saviour. Football changes, the world changes, nothing stays the same, but you always feel like Arsenal would be a constant, and I’m really worried about what kind of Arsenal we’ll have if things go the way I fear they might.

I doubt it’s one that any little kids will call up with any sense of awe and wonder, simply because it’s the Arsenal.

For more on Kroenke and Usmanov, their pasts and their business practices, check out Arsecast 436 – Billionaires, in which I talk to James Montague, author of the fantastic book: The Billionaires Club – The Unstoppable Rise of Football’s Super-rich Owners.