“Oh do shut up, Arsenal Gentleman, you silly old berk. It wasn’t funny in 1927 and it’s not funny now. Leave me alone.”

Oh, how she loves me so. Every Friday for 90 odd years I have greeted her this way. For as you will know, Friday is named for Frigg, a goddess, and the wife of Odin, who dwelled in the wetland halls of Fensalir. One of her offspring with Odin is the gleaming god Baldr, brother of Thor. Baldr’s line continues down the ages until it reaches our very own Number 31, Stephen Collingwood, and I shall present to you today a full player profile.

Before we reach several hundred words on our godlike wingback we have a couple of satisfactory matches on which to report.
To Stamford Bridge then. Listeners to my podcast would have been fully prepared for a visit to this hellish corner of west London. What was in 2002 a dilapidated dog track was bought by Roman Abramovich and converted into a ghastly postmodern ersatz ‘Village’, in the manner of Hameau de la Reine at Versailles, Marie Antoinette’s confected ‘rural retreat’, if it had been designed by a partially sighted sadist. On matchdays it is a heavily policed holding pen for the area’s pot-bellied racists.

It has not been a retreat of any kind for gooners for some time, but on Sunday we came away with a welcome and unexpected point. Unexpected because Arsenal have been utterly bereft thus far, and welcome because of the manner in which it was won: Relatively ugly, with a heavy dose of pragmatism.

Initially it looked like we may succumb to Chelsea’s pressure with their forward Mr. Morata looking extremely likely to ripple the rigging early on, yet Arsenal steadied themselves and began, like a greedy father afore the Sunday roast, to carve out a few things for themselves. The first to Welé via Harry Bell and Mr. Webbley, then shortly after that man Mr. Bell, jet-heeled scamperer pulled back to Mr. Lakeshead who scuffed it. Mr. Collingwood, our Big Beast, had an attempt saved.

Shapeshifting serpent Mr. Fabregas put Pedro through but Harry the Helmet, relatively recently rescued from Stamford Bridge, remained steadfast. Mr. Shackleton fizzed one wide, and then Mr. Ramsara, superb throughout, wriggled through the Chelsea defence like a buttered eel, before hitting the mast. It pinged back to Lakeshead but before pandemonium could erupt, and justice could be served on the cads in blue he inexplicably put it over the bar.

Later in the match Mr. Masterson popped a noggin bobbler in but it was ruled offside. Easily the most hilarious moment of the match came when Mr. Luiz, annoyed by Whizzbang Saunders doing his Diego ‘Troll Supreme’ Costa impersonation, lunged towards the meaty shins of Mr. Collingwood. Mr. Collingwood is made of a material that is a mystery to science, as we shall discover later, and was unharmed. Mr. Luiz took a straight red; but that is the least of his worries. He now has over three months of sweating nightmares as he anticipates Chelsea’s visit to Arsenal on New Year’s Day, and the revenge that is likely to be wreaked upon him.

Now when you think of an ‘energy drink’, do you think as I do of a Coffee Martini? Of course you do. So henceforth the English Football League Cup, if you cannot simply refer to it as that, shall be called the Coffee Martini Cup. We were matched with Doncaster Rovers in this competition earlier in the week and made typically heavy going of beating them.

Fenton’s first goal of the season was enough, and our returning Frenchman Monsieur Wilshère looked like he was up for the scrap. With a League One side. Promising, but nothing more. One imagines that he still has the tendency to try and win harder games than this singlehandedly, thereby losing his discipline, so let us not get carried away by a good performance in a game that we should easily have won by three or four goals. 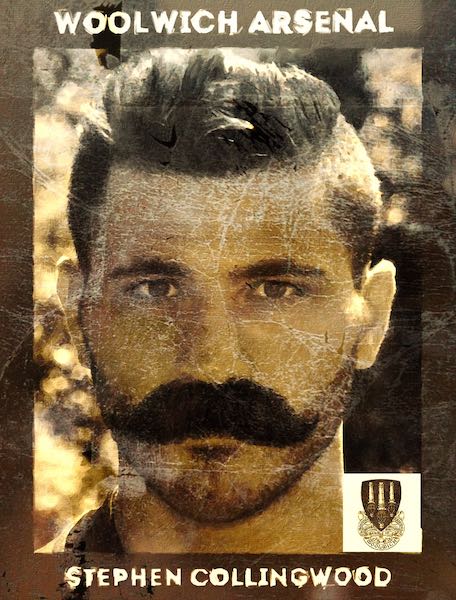 Mr. Collingwood then. A brick shithouse of a wingback made from 50% human DNA and 50% unknown alien alloys. This much we know. But there is more. He is a direct descendant of Baldr, son of Odin. In Gylfaginning, which as you’ll know is the first part of Snorri Sturluson’s Prose Edda after Prologue, he deals with the creation and destruction of the world of the Norse gods, and many other aspects of Norse mythology. Baldr’s death is seen as the first in the chain of events which will ultimately lead to the destruction of the gods at Ragnarök. Baldr will be reborn in the new world, according to Völuspá. I believe that Baldr has been reborn as Arsenal’s number 31.

As a child in Shropshire, he excelled at all sports. He played rugby with Shropshire Under Fifteens as a six year old, until he was ejected from the league due to complaints about broken bones and bruising from the older children. He started attending a local gym at ten, leading his trainer to observe that when Collingwood goes to the gym, the weights get stronger. He lifted a Ford Fiesta from a elderly stricken lady at age twelve whilst smoking a cigarette with the other hand.

At thirteen he witnessed a Post Office being robbed and ran to their aid. Witnesses say that he calmly walked inside and closed the door behind him. The two armed robbers have not spoken since and both are now training for the priesthood. And when he finally left home at sixteen, to attend an elite football training academy, he said to his father, “you’re the man of the house now.”

He practises fending off attackers by running down the middle of the North Circular and bouncing cars hither and thither. He is a magnificent, old-fashioned beast of a footballer and we should be glad of his services.

Mr. Collingwood, we salute you.