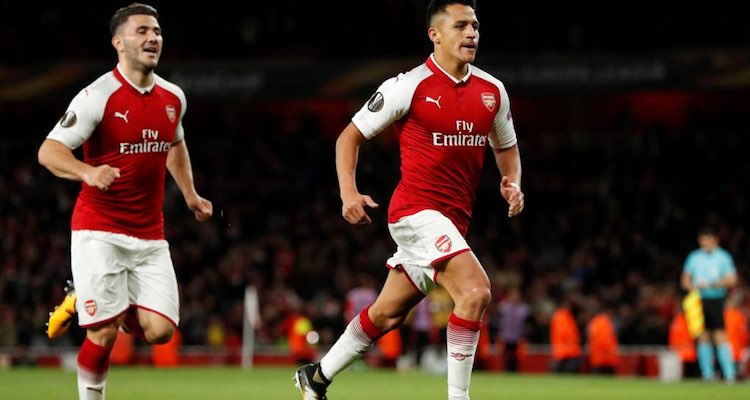 Well, we did say the Europa League was different, but I’m not sure anybody quite expected what we saw last night. I guess we have to divide it into two parts: the match itself and then the kick-off delay and what happened inside and outside of the stadium. Let’s start with the football though.

As expected there were plenty of changes, nine in all to the side that beat Bournemouth last weekend. We had the back three that started the FA Cup final, Ainsey-Maitland Niles at left wing-back, a midfield pairing of Mohamed Elneny and Alex Iwobi, with Alexis, Walcott and Giroud as the front three.

It was evident fairly quickly that midfield was a problem, one exacerbated by their early goal. Credit to Ospina for coming off his line and reading the danger, but he could only hack the ball into midfield rather than out of play or further down the pitch. Cordoba’s finish was really exceptional to be fair, but the goalkeeper should have done better in the first instance.

The visitors were energetic and hard-working, while Arsenal looked a bit jittery and it was a first half in which too many players went missing. Rob Holding didn’t have a good game, but the moment when the young centre-half looked for someone to pass to, saw nobody showing for the ball and decided to go on a run with it (ultimately losing it) summed up the problems. Elneny had the same issue at times, too many men ahead of the ball surrounded by opponents making it hard to keep possession,

We plodded our way to half-time, at which point the manager changed it, bringing Sead Kolasinac for Holding, shifting to a back four, and moving Maitland-Niles back into the centre of midfield. Lo and behold the team had balance, and the players looked instantly more comfortable.

Elneny was involved in the first goal, playing a nice pass over the defence to Walcott whose control wasn’t great but his attempted cross looped up into the air off a defender and Kolasinac was there to volley the dropping ball home. Coming just three or four minutes into the second half it helped settle things down too, although we still lacked incision in the final third. Walcott was offside a lot; Giroud wasn’t getting any real service; and Alexis looked like a man whose was desperately seeking something to get his touch and confidence back.

It took him a while, but boy did he find it. Pushed wide by an Iwobi pass he came back inside, although the Cologne defenders must have felt confident as they tracked him and seemingly cut off the option of that curled shot he likes to much. Not quite enough though, because with hardly any back-lift he whipped the ball around the closest defender, leaving the goalkeeper absolutely rooted to the spot as it curled into the far corner of the net. A genuinely outstanding strike, and hopefully one that will give him the boost he needs before Sunday.

Ospina was barely troubled at the other end, and when a Walcott shot was saved late on, Hector Bellerin was quickest to force the rebound home and make the game and the points safe. Very much a game of two halves, from our point of view, and I don’t think it’s any coincidence that we improved so much when we reverted to the back four.

It’s not simply that this is what the players are more used to and most comfortable with, it addressed the key weakness of the team: central midfield. Instead of the extra man at the back we had him in the middle of the park, and the difference it made was obvious and immediate.

Again, I come back to the idea that the back four is what we should be using. In principle, I have no issue with a back three at all. It’s a system that can obviously work, but I think it needs a manager who really believes it and who can really coach his players how to best operate in it. I’m not sure either of those things is true of Arsene Wenger, and you cannot convince me that we have been defensively more solid with it since the change.

It doesn’t really matter to me that last night’s team wasn’t our strongest on paper, because even with our ‘first’ team out there that midfield issue remains, and the only way to solve it is with an extra body. You either sacrifice one of the front three, or one the back three and for me it’s a defender. Let’s see what he does for Chelsea.

Final word on the game, it was nice to see Jack Wilshere back out on the pitch and those minutes will surely do him good. When midfield options are not as plentiful as we would like, it’d be great to see him stay fit and show some of what we know he can do. Also, good to see a competitive debut for Reiss Nelson who came on, didn’t look out of place, and in 7 minutes made more successful passes than Theo Walcott did in 83.

So, a winning start to the Europa League campaign, and despite a poor first half the second was very convincing. Everything, of course, happened in the shadow of what came before it, and that added an element of weirdness to the whole thing.

It was obvious from very early on in the day that far more Cologne fans than those who were supposed to have tickets were in London. There were videos of them in high spirits, singing and marching through the streets, so when they tried to get into the stadium before the game it’s a situation that should have been managed better.

There were incidents where they rushed turnstiles, this prompted a police reaction, nobody was allowed in the stadium and the game delayed by one hour. There were fears it might not go ahead, but the two clubs and UEFA consulted and the 9.05pm kick-off agreed.

It became clear very quickly that many Cologne fans had tickets designated for home fans, at all levels including corporate. Many of them looked to leave those areas and jump into the away end, and ultimately the vast majority ended up in the Clock End. However, many more were scattered throughout the stadium, and there were scuffles when they scored early on and made themselves visible.

There were worries about it kicking off in a big way but that didn’t happen, with most in good spirits. Anecdotally, German fans spoke of becoming Arsenal members and buying tickets that way, or from other Arsenal fans. Some even wore Arsenal shirts to fit in!

There are two things here. The first is that it created a rare atmosphere inside the ground, and there’s a very good case to be made for giving away fans a bigger allocation, especially for a competition which is clearly not of sufficient interest to some Arsenal fans. They made a lot of noise, the Arsenal fans responded, and that energy was very apparent.

The second thing, however, is that atmosphere came at the expense of many Arsenal fans who had bought tickets, who were unsure if it was going to be safe for them, safe for their kids etc, and didn’t go in. Or those who went in and found their seats full of opposition fans. Yes, you can talk up how it made for a different, exciting energy inside, or how it was a throwback to how it used to be, but that’s not what you’re selling people.

Like it or not, that’s not what football is anymore, and the people who did buy tickets had a right to watch the game in the seats they paid for. You really have to ask serious questions of both clubs and the police – although I think there’s some credit due there too, because for the most part it passed off without any serious trouble and I’m not sure it would have been as well managed had it been English fans abroad who came en masse and stormed a stadium.

There are clearly issues to be looked at in terms of stadium management and ticketing, and how it was so easy for so many of the away fans to buy ‘Arsenal’ tickets. It’s not entirely down to the club, but you would hope that both Arsenal and Cologne, the police and the UEFA delegation, will study this and make sure it doesn’t happen again like this. It was a mess, but they more or less got away with it because it was almost entirely about fans wanting to watch a football match rather than cause trouble – but you can’t rule out that second motivation in the future so they have to learn from this one.

Right, because the match was last night and ended so late there’s no Arsecast yet today. There will be one later, hopefully ready by about lunchtime, so I’ll do my best to get that for you asap.

In praise of Mikel Arteta (and Hector Bellerin)