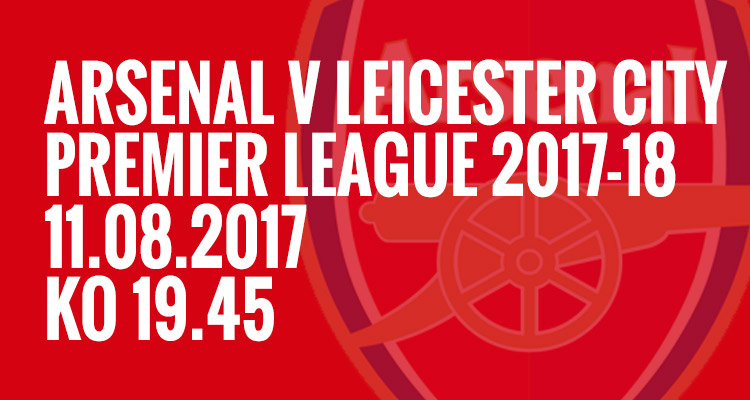 Well, here we are folks, the brand new season is upon us and we kick off tonight against Leicester City at the Emirates.

It’s a strange thing playing your first game on a Friday night because when you think of the opening day of a new league campaign you think of a sunny August day, bright sunshine, shadows on the pitch, sunglasses, short sleeves and all the rest, but that won’t be the case this evening. My weather app tells me it could be a cloudy, showery evening in London, but it is what it is and when you suckle from the TV teat this is what you get.

There was some good news on the injury front yesterday as Mesut Ozil, Aaron Ramsey, and Per Mertesacker all trained, while Francis Coquelin was back in the group too after picking up a knock during pre-season. Whether that means they’re all ready to start tonight is another question, but considering how tough our first few games are getting off to a good start tonight is imperative.

I have a feeling Wenger might be a little more cautious with Aaron Ramsey though, bearing in mind the injury the Welshman picked up on the opening day last season that left him sidelined for about three months. If there’s any doubt in his mind about the ongoing calf issue he’s been dealing with, then we should see Mohamed Elneny in midfield after his Community Shield performance showed he can work nicely alongside Xhaka.

We’re obviously without Alexis Sanchez because of his injury, Laurent Koscielny is suspended until the Liverpool game – and being eased very gently into things anyway it seems – while Shkodran Mustafi arrived back late and is probably a little short of fitness for this one (at least in terms of starting).

Having Ozil back in the side adds an extra creative dimension to our forward play, but all eyes in that area of the pitch will be on new boy Alexandre Lacazette. We’ve seen big signings come to Arsenal in the past and take some time to get off the mark, but that was in the pre-social media age when there was a bit less pressure and a lot less spotlight. You wonder what the chat would have been like as Dennis Bergkamp and Thierry Henry took 8 and 10 games respectively to score their first Arsenal goals, and then you stop wondering because why would you do that to your own head?!

All the same, when you’re the record signing there is an extra amount of pressure, and Arsene Wenger has certainly done little to ease that, challenging the 26 year old to match his outstanding Ligue 1 scoring record in England:

Lacazette …is an intelligent player. We have a game backed on mobility and technique and I think he can integrate that well.

After that, we get the efficiency. His record in France is to score one in 80 minutes. If he can maintain that record that would be ideal for us. As a game is in 90 that would guarantee you a goal. You could say that Ibrahimovic transferred an identical amount of goals from France to England. So that’s the target Lacazette should set.

It’s a big IF, in fairness, and there may well be a period when he adapts and comes to terms with English football, but a goal early in his Arsenal career would take some of that pressure off. He’s not arriving as some kid, he’s 26 and has plenty of experience, so hopefully he can make his mark tonight. Certainly the manager feels like this is right way to get him going, I guess we’ll see.

It’s almost impossible to mention our opening day without referencing our poor opening day record. Since thrashing Everton 6-1 in 2009, we’ve won our first league game just once. That was in 2014 when a late Aaron Ramsey goal gave us a 2-1 win over Crystal Palace. There have been three draws and three defeats, so it feels something like a psychological barrier at this point.

In other season it’s felt like we’ve been unprepared, but while I still feel like we need an addition in central midfield, I don’t think that’s the cast this time around. Pre-season has been generally positive, and although we’re missing a couple of first team regulars, we have a big, deep squad that should be able to cope. When you consider the next two games are Stoke and Liverpool away, then the importance of three points tonight becomes even more obvious.

Still, I think we can do it. I know Leicester frustrated us last season, but we come into this one with a clean slate, some ingrained pre-season optimism, a couple of new players who can help make a difference, and I’m looking forward to it. Here we go again.

As ever we’ll have a live blog for you, and all the post match stuff, reports, stats etc over on Arseblog News afterwards. For some extra reading this morning, you can check out the Arseblog pre-season preview which looks at the squad and where we are on the cusp of the new campaign.

If you’re looking for the first Arsecast of the new season, you’ll find it here – or you can listen/subscribe below. Right, that’s it, catch you later on for the game.