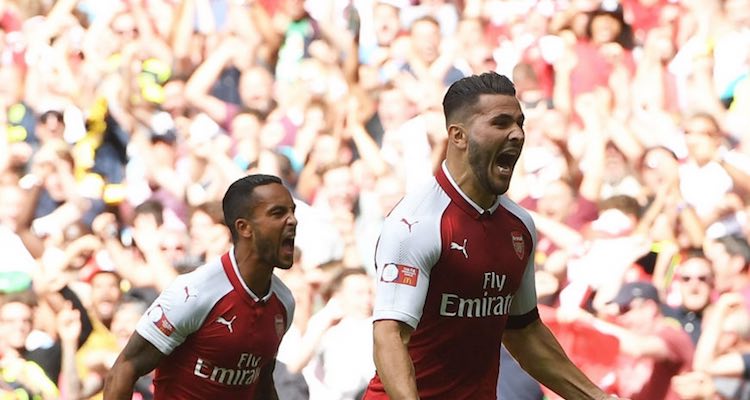 Three. That’s how many fingers I’d be holding up this morning if I were a borderline sociopathic football manager who counts the Community Shield as a real trophy, because I’d also be using the Emirates Cup and International Champions Cup to add to my collection.

I’m not though, so I won’t hold up any fingers at all, but suffice to say that pre-season ended on a pretty positive note following a penalty shoot-out victory over Chelsea yesterday. We saw the introduction of the ABBA system for the penalties and the Arsenal players held their nerve and dispatched their penalties with aplomb, while the Chelsea players – Courtois in particular – did not.

I’m always a bit baffled when people criticise penalty shoot-outs, as if it’s not a good way to decide a game. Penalties are a test of nerve and character, as well as skill and technique. Beyond the two managers doing Rock, Paper, Scissors, I can’t think of a better way to find a winner when the match is drawn.

It took a late equaliser for us to force that shoot-out too, and it was new boy Sead Kolasinac who got it. Victor Moses made up for his red card in the FA Cup final (no he didn’t) with a goal for Chelsea just a minute into the second half, and try as we might we couldn’t find a way through. The best chances saw efforts by Elneny and Xhaka superbly saved by Courtois,

We’d brought on Giroud and Walcott to help us find a goal, but the Bosnian defender was the man to find a way through. From a free kick conceded by Pedro’s horrible raking foul down the Achilles of Elneny – a challenge which saw him sent off by the referee who spent most of the day trying to get in the way of Xhaka’s passes – the Swiss international floated the ball in and Kolasinac was there to head home.

He’d only been introduced after Gary Cahill’s elbow had split Per Mertesacker’s head open, leaving the captain requiring stitches, but it was a fitting end to a very impressive Arsenal debut. There won’t be too many right-sided players looking forward to meeting him this season. He’s quick, he looks very, very strong, and he’s a positive player who looks to get forward as much as possible.

So, Chelsea went first with the penalties and Gary Cahill scored. Walcott and Monreal took the next two for us and scored, before Courtois blasted his kick into outer space. Their new signing Morata then put his wide, leaving us in the driving seat. Oxlade-Chamberlain tucked his away which left Olivier Giroud the task of winning it for Arsenal, which he duly did.

As I said yesterday, there’s no point going overboard but it’s still nice to win a game like that against opposition as good as Chelsea. There were some real positives from the game too. The midfield of Elneny and Xhaka was very good, the latter in particular showing his quality on the ball. I think he’s going to have a really strong season and he’s becoming more and more influential in this team.

Alex Iwobi was exciting, Alexandre Lacazette hit the post, and I think it’s worth mentioning the performance of Nacho Monreal too. He’s often overlooked but the Spaniard is just such a consistent performer. He was part of the back three again, and when Mertesacker went off he slotted into the middle of that defensive unit without a hitch. He’s an absolute dream of a player.

Afterwards, Arsene Wenger was pleased, but sanguine, about the win:

It’s an encouragement and nothing more than that. We want to find a good balance between the confidence we can get out of these games and the urgency that every Premier League game demands.

And he’s looking for his team to take the positivity from it into the new campaign:

So, all in all a good day out, and when you consider that we were without Alexis Sanchez, Mesut Ozil, Laurent Koscielny, and Aaron Ramsey – all of whom would be first choice players in this current set-up – it shows there’s more depth than perhaps people think.

We now have to take that performance and positivity into Friday night’s Premier League opener against Leicester City, but that is something we can chat about throughout the week.

The manager also spoke about transfers after the game, and for those wanting news of more incomings there’s not much to tell you this morning. He again reiterated his desire to trim the squad and move some players on, and I really think that until we do that we’re unlikely to see any further incomings. Let’s hope they can get things moving on this as quickly as possible.

James and I will be here later on with an Arsecast Extra for you. We’ll be discussing the Community Shield and lots more, so as ever if you have a question or topic for discussion please send to us on Twitter @gunnerblog and @arseblog and we’ll have the podcast available for you before lunchtime.