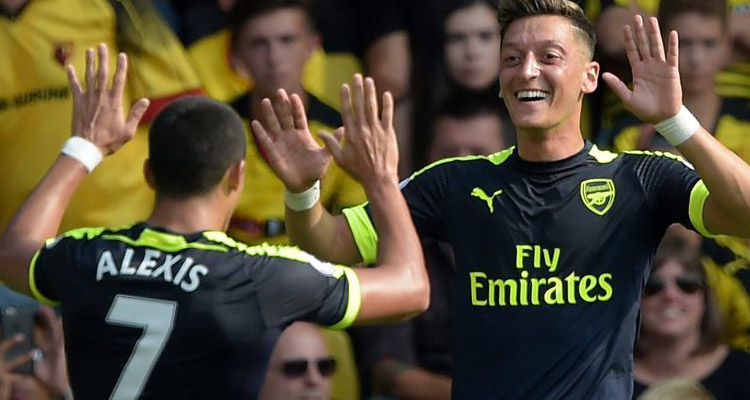 Morning all, very interesting debate over yesterday’s post about the possible sale of Alex Oxade-Chamberlain to Chelsea. Thanks to all of you who chimed in with different views, and thanks to the vast majority of you who did so without resorting to name-calling or questioning my sanity.

You know, it is perfectly ok for people to have differences of opinion. We can think different things about stuff yet not become enemies. I understand what a complicated situation it is, for many reasons, I’m just saying if it were me I’d take the money. I appreciate many of you wouldn’t, but there we go. The world keeps turning (for now)!

The manager has his pre-Stoke press conference this morning, so I suspect he’ll be asked about it, and my suspicion is that he’ll say he wants to keep him, like he has done all summer. Thus far, however, there’s been little progress made in that regard, the player’s agent has been very difficult by all accounts, and I just feel like the club will have to make a decision that perhaps they don’t want to make but will be left with no choice to when it comes right down to it.

Interestingly, Arsene Wenger name-checked the Ox when discussing player contracts with beIN Sport this week. Asked once more if Alexis Sanchez would be an Arsenal player when the transfer window closed, he again reiterated his position, saying:

He then suggested he found it strange that people were taken aback that Arsenal might hold a player to the full duration of his contract:

It just looks unusual to the media sometimes that clubs want contracts respected. To me it looks logical so I’m amazed that you are amazed. It’s normal. If I sign a contract I respect it. Of course if a club releases me I can somewhere else, but I know when I sign for two years at Arsenal that Arsenal has that contract and I have to respect it.

We hope we can extend the contracts of Sanchez, Chamberlain, and Ozil.

I think this respect of contracts thing is a rather fluid concept, and to say he’s amazed at this particular stance is a bit disingenuous, because when a player – a valuable asset – gets into the final 12 months of their contract having refused to commit to a new deal then there’s usually one way it goes. Rather than let him go for free, the club (not just Arsenal), will look to move him on, take what money they can get and, ideally, reinvest that money into a replacement.

We have seen it happen at Arsenal before, and at other clubs that we don’t pay too much attention to, and ultimately it’s rare (and poor management) that you have two world class talents like Mesut Ozil and Alexis Sanchez at a club where they could go for free inside 12 months. I come back to Oxlade-Chamberlain because while he’s a popular player, and one with potential, if everyone’s fit he doesn’t make our starting XI which is why I think there’s more chance of him being sold than the other two.

Basically, Ozil and Alexis – with 40+ goals and 20+ assists between them last season are just too important to this team for us to countenance selling this summer, not to mention the reputational damage it would be seen to do if we jettisoned the two stars of the team in one go. Ox doesn’t come close to that in terms of productivity. I don’t think he’ll ever be that crucial to our first team beyond being a very handy utility player. So, if you have to try and get some money in he’s the more obvious choice.

The other thing I would say is that contracts to clubs are only that meaningful when they want to keep the player. There have been players in the past who have had contracts but we’ve done everything we can to get rid of them. Loan moves, subsidising wages, minimal transfer fees, but do these guys who never play but ‘respect’ their contracts earn any kudos for doing so?

Would Arsene Wenger, having decided players like Kieran Gibbs, Carl Jenkinson, Mathieu Debuchy and others are surplus to requirements this summer, really respect them if they simply sat around and picked up their wages for the final 12 months or so? He couldn’t be publicly critical of them because it would fly in the face of his justification for hanging onto Sanchez, but I doubt he’d be that impressed.

So how much you respect the contract is dependent on how good you are, how important you are, and it’s the nature of football and the business of football that when you’re a player of some stature a club will bend over backwards for you, but as soon as you’re not they can be as cold and ruthless as you like. Of course that makes sense, but it shows there’s no one size fits all when it comes to contracts.

Anyway, it’ll be interesting to hear if the manager expands on this any further in his press conference this morning – coverage of which you’ll find over on Arseblog News throughout the morning.