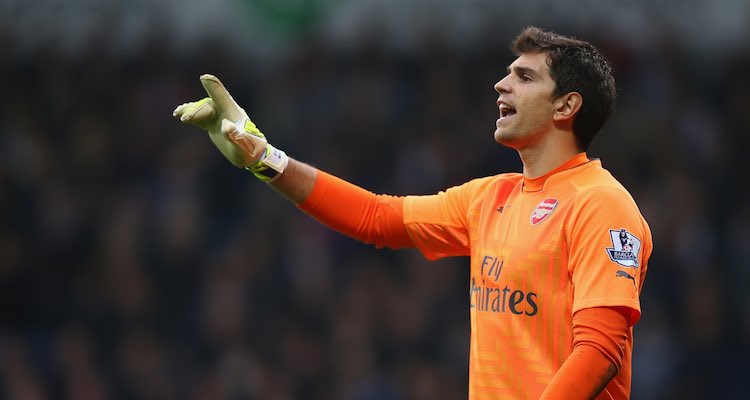 Good morning, a very quick early blog for you today for I am travelling this morning.

What should we talk about? Let’s start with some actual transfer news. Yes, there is some, I promise. Not a player coming in but one going out, and it’s a goalkeeper. Ooooooh. Emi Martinez has joined Getafe on loan for the season, which I think is a good thing for him.

There were plans earlier this summer for him to become the back-up to Petr Cech, made on the assumption that David Ospina would be leaving. However, as we told you earlier this week, the Colombian has decided to stay at Arsenal, and that means Martinez has had to make a decision about his future.

He’s going to be 25 in September, and while it’s still young in the life of a goalkeeper, he probably lacks experience because of how little he’s played. To put it in perspective, at more or less the same age, Wojciech Szczesny had four or five seasons of being the number 1 at Arsenal, playing over 180 games for the club. Martinez has fewer than 5o first team games under his belt.

So, a loan makes a lot of sense for him. A good season of first team football, playing in one of the best leagues in Europe against some of the best players in the world, can only be a good thing. Best of luck to him out there.

Aside from that, the only Arsenal news is that Laurent Koscielny is available for the Comminuty Shield this weekend against Chelsea. Some might think this is a good thing, but it means that the suspension he was issued for being sent off against Everton last season still has two games to run.  The FA Cup final win over Chelsea was the first of those games, and he’ll also miss the season opener against Leicester City next Friday, as well as the trip to Stoke the following Saturday.

With Shkodran Mustafi back late from his holidays, Rob Holding and Calum Chambers in more or less the same boat, and Gabriel still sidelined by injury, it gives Arsene Wenger some thinking to do for this weekend and the first couple of games of the new campaign. It all feels very familiar though, like we should be used to this kind of thing by now, so hopefully it’s not as big an issue as it has been in the past.

The other big news, non-Arsenal related, is the transfer of Neymar to PSG from Barcelona. I know things have gone crazy in the transfer market this summer, but the idea that they’re going to pay a €222m buy-out clause up front is just absolutely nuts.

And I know that money is what talks in football, it’s always been that way, so at this point why don’t we embrace that and not make any pretence that this deal is about anything other than money? I’m not being critical, players are free to do what they want, it’s their job after all, but the idea that this is a move based on motivations other than financial ones is fanciful to me.

As much as we have had issues with Barcelona down the years, it’s fair to say they are an elite football club, one of the best and biggest in the world. Their history and quality and track record of winning trophies makes that the case. PSG, last season’s Ligue 1 runners up, are a plaything for Oryx Qatar Sports Investments. They have a lot of money, and I’m sure they want to build the club into something big.

There’s no scope these days for forging a reputation through consistent performance and longevity, and I think I heard Rory Smith of the New York Times on the radio the other day say that their goal was to turn PSG into the first great club of the digital age. What better way to do that than buy one of the best footballers in the world along with his 31m Twitter followers, his 80m Instagram followers, his 60m Facebook likes, and all the rest?

From a footballing point of view, it’s undoubtedly a step-down. Not too far down, but he’s still gone from a club with a history of winning the Champions League to one that never has. Maybe he can help them achieve that goal, maybe that’s how he sees himself making his mark on history, but ultimately this is a deal that is going to make him and his family a lot of money. And as I said, there’s nothing wrong with that. He’s fully entitled to make the best of what is a short career, but don’t try and sell me this on a sporting level.

As for what it means for transfers, it’s just bananas. Last year Pogba was the most expensive signing in history, this has just blown that completely out of the water. Like it or not, it becomes a kind of benchmark for every other deal that gets done. If X is worth this, then exponentially Y is worth that. It’s also something that Arsene Wenger predicted too:

Wenger at it again pic.twitter.com/TQOgDyo8o4

Quite where we go from here is anybody’s guess. I know we have to compartmentalise football and understand that it exists in its own mad world, but without wanting to sound like an old fuddy-duddy, a €222m transfer is basically fucking mental, especially as it all has to be paid up front. FFP my arse.

Also, can I temper my footballing praise of Barcelona with some finger-pointing? It was reported that they were looking for help from other clubs because of PSG’s pursuit of Neymar. Considering the way they’ve behaved down the years when it comes to our players, I hope we sent them a fax of a picture of our arse that we made by sitting on the photocopier.

Right, that’s just about that, have a good day, news over on Arseblog News and maybe there’ll be some insight or gossip from member’s day later on.