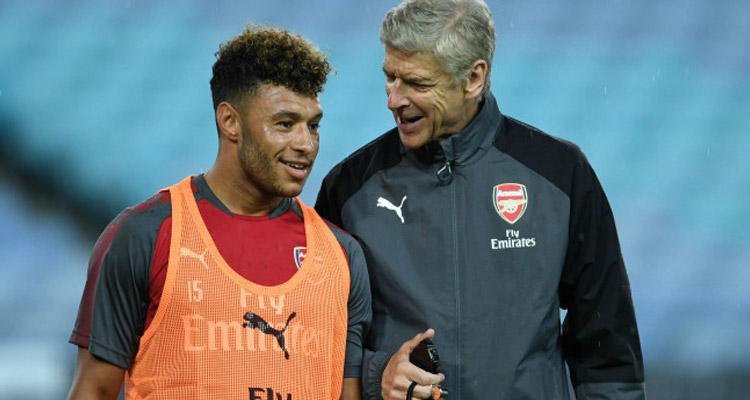 Plenty going on this morning given the manager held his pre-Liverpool press conference yesterday and there were some very interesting bits and pieces to come out of it. Not the least the Alex Oxlade-Chamberlain situation which is now beginning to hurt my head.

Arsene Wenger spoke of his quality and potential, saying:

He didn’t sound too confident about him doing that though, as he very publicly tried to play the ‘Look how much we’ve done for you‘ card:

We invested a lot of time and confidence and money in players like Alex Chamberlain who we bought at a young age. For me, they have a responsibility for the future of this club. Alex Chamberlain will be one of the big English players in the coming years and I personally am highly determined to keep him here at the club.

Leaving aside the idea that a player or his his advisors might be swung by a guilt-trip in this day and age, to me this is the real head-scratcher. If his potential is so high, if he’s someone the team should be built around in the years to come, if he’s going to be one of the big English players in the years to come, why did we allow his contract to run down so far? Why did we not make any attempt to offer him a new deal until a few months ago? Even when Arsene Wenger was saying his departure would do ‘big damage‘ it had got the point where the player’s agents were leaking stuff to the press saying that even if they were offered new terms they wouldn’t sign it because it had come too late.

There was reportedly a meeting between the club and the Ox yesterday, and some reports say he was offered a deal worth £180,000 a week to sign a new contract. That’s more than Alexis Sanchez earns, that’s more than Mesut Ozil earns, and it harks back to the days of project youth when we offered new deals based on the potential of a player rather than his actual performances. It’s not to knock him per se, but Alexis scored more goals last season than Oxlade-Chamberlain has in seven years at this club.

I know that’s not the only measure of a player, but he’s someone who has played most of his Arsenal career in the attacking third of the pitch so it’s relevant enough. It’s also an astonishing amount of money, almost £40m over the course of a four year contract, and while I like Oxlade-Chamberlain and think he’s got some superb qualities, I have reservations about his ability to perform at a high level on a consistent basis. Maybe he’s about to blossom and become that player everyone wants him to be, but maybe, at 24 and with seven senior seasons under his belt, this is who he is.

Once more Chelsea are said to be circling with a deal worth £35m as Ox looks set to turn us down, and while my inclination would be to accept it, I can understand why others wouldn’t. I think if there were a cast-iron guarantee the money would be reinvested back into the squad, it might be easier to countenance his departure – even to a rival – but we’ve all been around this Arsenal block too many times to be confident of that.

What also gives me pause for thought is what the manager said about moving players on to make room in the squad for some younger players. He says:

I’d love to know who the three or four young players are. Reiss Nelson is certainly one, but aside from him, who looks ready for first team football? Based on pre-season Ainsley Maitland-Niles and Joe Willock look promising but still some way from making the step-up, and beyond that it’s hard to pinpoint the youngsters who are ready to make the grade. If it sounds a bit like we’re looking at a lot of outgoings in the final week of the window and minimal, if any, arrivals, then I think that’s probably the case.

I’m completely happy with the strength of the squad.

I guess that’s why we’ve been trying all summer to sign Thomas Lemar, a deal Wenger know says is ‘dead’. Nothing says how happy you are with the quality of your squad by attempting to bring in players who would improve it.

He also spoke about Jack Wilshere, and admitted on one hand he can’t guarantee he’ll give the England man the playing time he needs, but on the other hasn’t ruled out the possibility of giving him a new deal if he stays and plays consistently. It’s like he’s just unwilling to make difficult decisions. Speaking of which, Tim Stillman’s column touches on that very thing, as he looks at midfield issues – check it out here.

Overall, it’s hard to look at Arsenal right now and not worry that there’s far too much indecision and not enough clarity about what we want to do and how we do. There’s plenty more discussion of that, the Mustafi issue, and more on this week’s Arsecast which you can find here, or listen below.

Finally for today, our European season will be laid out before us later this morning as the Europa League draw takes place. We’ll have details of that and all the other news of the day over on Arseblog News. Enjoy the podcast, more from me tomorrow.