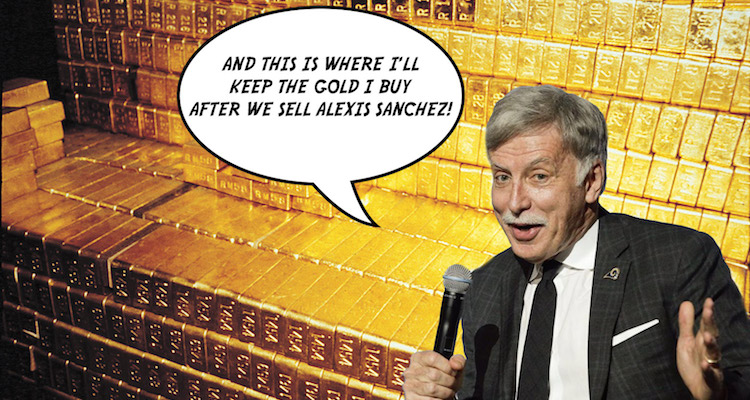 Morning everyone, strap up and buckle yourself in for what could be a really long transfer deadline day. For those of you holding out hope that we might do something spectacular at the last minute – like that 2013 day we signed Mesut Ozil from Real Madrid – the club made it clear last night that there’d be no such arrival.

We all know the BBC’s David Ornstein has a good source at the club, and according to him there is no money left for ‘major signings’ in this window. Here’s the video of him saying exactly that on BBC 5live last night.

People will naturally ask, where the hell is the money? And it’s such a serious question that I am not even gonna use Fat Tony. When I’m forced to eschew a Simpsons reference you know it’s a worrying situation. I asked Phil Wall (@AngryofN5) of the AST to provide me a conservative estimate of what Arsenal had to spend this summer based on the public accounts.

£90m net, but does depend on things like how deals are structured and book value of who is sold.

I asked if that included wages:

Wages can only increase by £7m, so not such a big factor in one sense, but it’s where the “one in / one out” talk comes from. Whether they really planned to pay Ozil and Sanchez £250k a week or more is debatable, given that would eat up the allowed increase.

Now, this is something you might have seen yesterday if you were online. The notion that the wage bill can only increase by £7m per year as per domestic rules – there’s more detail on that in this post. So, let’s deal with wages first. There’s been a couple of big additions to the wage bill, in Alexandre Lacazette and Sead Kolasinac.

I could be wrong but it just feels to me as if the wages thing is a bit of a smokescreen. That’s something we could get around if we had a mind to do it. The bigger question is why Arsenal are saying they don’t have any money for a major signing when, as soon as we complete the Oxlade-Chamberlain transfer, we’ll be around £27m in profit for this transfer window so far.

Are we really supposed to believe that Arsenal Football Club is incapable of making a significant signing today after doing business which gives us a profit on top of what we already had to spend? Remember, this is the same football club that in the wake of Arsene Wenger signing his new contract was briefing the press that we had somewhere in the region of £150m to splash out (and yeah, there was always a pinch of salt required with those stories, but still).

Now we’re crying poor mouth. It’s absurd. Of course there are issues with the squad and there remains the need to shift off some of the deadwood. That we’ve arrived at deadline day with Mathieu Debuchy, Lucas Perez, and other fringe/youth players still here speaks to our profound inability to cope with the market and the difficulties of doing transfer deals. A spectacular sale, like that of Oxlade-Chamberlain to Liverpool, is one thing, but you have to be able to do the nuts and bolts stuff too, and that seems beyond us.

It would make you question everything that’s going on at the club right now. Is Stan Kroenke the man reining in our spending as he has issues with his other sports ‘franchises’? He’s certainly the captain of a ship that appears to be rudderless on many levels. Can our Chief Executive, who was opposed to the idea of renewing Arsene Wenger’s contract, continue to work effectively with a manager he wanted rid of, and vice versa?

You can be quite sure the fluffy interviews he gave in public about how great a decision the two year contract was did little to repair their dysfunctional relationship. Are we not seeing the evidence of that dysfunction in our summer business? Is it not obvious that we’re operating without cohesion, both on the pitch and off it?

For me, as I have said countless times, it comes back to Kroenke and his inability or unwillingness to manage this football in the way it should be. I’m not saying that to absolve anyone else of responsibility, or that he is the only thing that needs to change, but the fish rots from the head down, and this mullet has gone septic. You might also fear that the Arsenal fish is also in serious danger of filetting itself from the inside out too, and it’s very, very worrying.

Going back to what David Ornstein said about there being no money for major signings, perhaps the key word there is ‘major’. It doesn’t rule out arrivals completely, although as of this morning there’s little to suggest we have anything lined up. By the end of the day we could have moved some more players on, brought in nobody, and this club’s answer to finishing 5th last season is not investment in the squad to get back where we want to be, but putting cash in the bank.

Some might argue that’s a consequence of finishing outside of the Champions League places, but a) we’ve heard them say countless times it’s something they have budgeted for and b) the Champions League money is not as vital as it was, made up for by the huge increases in domestic cash. Remember, Arsenal earned £140m last season alone from the Premier League, and will do likewise (more or less) this time around.

I think we’re seeing a naturally conservative, risk-averse football club fold in on itself, because it suits the owner, and he knows there’s nobody there who will demand anything different. Today could well be a long day, ahead of what’s shaping up to be a long season.

For our sins, we’ll be live blogging the entire day (sweet holy jebus help us), and you can join us right here for that. We’ll have all the news and gossip and what have you right up until the deadline at 11pm tonight.

The two big stories of the day will likely be Alex Oxlade-Chamberlain completing his £40m move to Liverpool, and intense speculation over Alexis Sanchez. Will City come up with enough cash to make Arsenal go back on their word and sell him? I suspect they might, but all will be clear by late tonight.

Final thing for today, good luck to Kieran Gibbs who moved to West Brom yesterday for a bargain fee of £7m, before issuing a very nice thank you to Arsenal. No bollocking around, no wanker agents leaking stuff hither and tither, good man, and good luck.