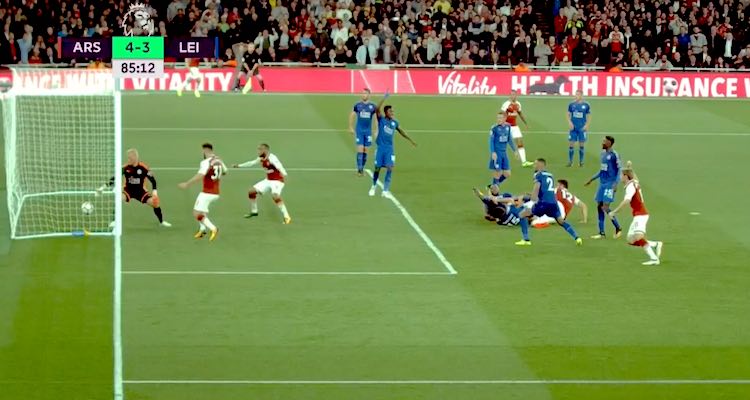 Oh Arsenal. Arsenal-y Arsenal Arsenal. Arsetastic, Arse-ariffic, Arsemungous, Arsetacular Arsenal. How I have missed you. Missed you like a pimple on the end of my nose but then sometimes popping the pimple is awesome and the pimple was well and truly popped last night.

If that makes little sense, I apologise, but having gone through the ringer of that game I still don’t think I’m right this morning. What an extraordinary way to start the new season. For the second successive season we saw a 4-3 at the Emirates on the opening day, only this time around we were the 4, which makes everything feel a lot better.

At one point, I think when we were 3-2 down, there was a little voice in my head saying ‘Can you really do this again?’ as the prospect of writing about another opening day defeat started to loom large, like a monster emerging from the shadows as you lie paralysed in bed.

But then Aaron Ramsey got us level, and that wonderful hunk of a Handsome French Bloke scored a truly outstanding header to put us ahead, and I shouted and Archer, who had been lying at my feet, woke up and started barking out the window because he thought it was a warning shout rather than that of a 45 year old man who was just making an involuntary noise because football made him do it.

To be fair, it was clear from the first four minutes that we were in for something out of the ordinary. On his debut, with possibly his first touch, Alexandre Lacazette put us ahead with a superb standing header from an Elneny cross. ‘Yes!’, I thought, ‘everything’s coming up Milhouse’, but then within two minutes Leicester had equalised after we decided that defending and goalkeeping were fluid concepts that didn’t really mean much.

1-1 after four minutes, and our back three looked shaky every time the visitors came forward or the Austrian Rory Delap chucked one of his long throws into the mixer. Still, we were busy enough at the other end and made some chances, one in particular for Welbeck was well blocked, but then Xhaka gave the ball away, Leicester crossed and Jamie Vardy was there with his pointy face to make it 2-1.

At this point I began to worry and when Okazaki headed just wide a couple of moments later, my worry turned into outright fretting. That our equaliser came when one of our central defenders, Sead Kolasinac, was one of the furthest men forward suggested there was a kind of free-form, make it up as you go along, outlook to our game plan. However, the impressive Bosnian squared if for Danny Welbeck who just about got the ball out from under his feet to make it 2-2 in first half injury time.

Ok then, we got away with that, have a good chat at half-time and sort things out, but if anything we got a bit worse before we got better. Cech had to come out and tackle Vardy who was clean through, and careless play at the back meant the keeper had to tip a Mahrez shot over. From the resulting corner the pointy-headed one got a free run and scored a very good header into the bottom corner. This was not the plan. I don’t know what the plan was, but this was not it.

We piled on the pressure, creating 13 chances between Vardy’s second goal and the final whistle, and when Arsene Wenger brought on Ramsey and Giroud for Holding and Elneny, we were playing two left backs at centre-half, a right-back at left back, a midfielder at right-back, our record signing striker on the left of midfield, and another striker on the right of midfield. Has any team ever played so many players out of position outside of a pre-season friendly or a training game?

Leicester sat deep, as you’d expect and it felt like time was running out. The monster from the shadows was sharpening his claws, but then after some sublime control from Mesut Ozil, we won a corner. The ball came out to Xhaka who clipped it back in to the area with the outside of his foot, Ramsey’s touch was perfect, the finish emphatic, and it was level.

Lacazette might have put us ahead only for a brilliant Schmeichel save, but from the resulting corner Olivier Giroud showed why he’s such an important player for this club. Despite the attentions of Harry Maguire, a gigantic man with a neck like a thigh who looks like his bones are just a bit too thick, the Frenchman was strong, held off his opponent, and bulleted a brilliant header in off the underside of the bar to win the game for Arsenal.

It was an outstanding bit of centre-forward play, and when people talk about having a different option up front, he gives you exactly that. There are few forwards in the game who can score those kind of goals these days, and I’m glad he’s still with us. Especially when you consider Arsene Wenger gave him the opportunity to leave this summer because his chances would be restricted by the arrival of Lacazette. The manager said afterwards:

I love the man and the player. He is a fantastic guy. He is committed and he loves the club. He doesn’t want to leave and I’m happy he wants to stay.

After that goal, it was about not doing anything stupid, going gung-ho to get more goals etc, and while it was a bit hairy a couple of times, we held on well, and made Jamie Vardy very sad, which is always a nice thing. More than that though, we won the game which, despite the many questions – and there are many, that it raised, was the most important thing.

Well if you were a manager you would have been on the bench when you are 3-2 down with 20 minutes to go and you win 4-3, you are more happy than concerned. I feel as well the goals we conceded we can work to get rid of. Because one was a corner, one was a ball that we lost in the build up and the third goal was on a corner again.

So we conceded two goals on corners. We were quite good last year on corners and I believe overall that with a bit of work we can get that out of our system.

I believe that with a bit of playing actual central defenders as central defenders we might also be better at defending, especially in central areas. In some ways I see his point, the goals were easily avoidable, but then I suspect you could say that about most goals conceded by most teams. There was a sloppiness and carelessness about some of our play, particularly in our own half, that will always be punished. We simply can’t afford to play like that against Stoke next weekend or they’ll have a field day.

There was a lot of bad, but quite a lot of good too. Certainly we have a lot of firepower in this team, with four different goalscorers, and even in midfield the yin and yang of our performance was obvious. Xhaka was complicit for a couple of the goals, yet almost everything positive we did last night came through him and he ended up with two assists. There is a lot to work on on the training ground this week, and hopefully by next weekend we’ll have the likes of Mertesacker and Mustafi fit again because I think they’ll be needed.

Overall, a thrilling, exhilarating and somewhat terrifying start to the new campaign. A start that gives us three points though, and which allows us to enjoy the rest of the weekend rather than tear what’s left of our hair out. Hold onto your hats folks, because on the basis of that game, it looks like this season is gonna be a hell of a ride.

Quick thing, and maybe not relevant to everyone, but the amazingly handy and very well used StatsZone app has lost its sponsor this season. It’s a great chance for some company to get their brand on something used by thousands of football fans. It’s only been one game and I miss it already, so if anyone can help out, get in touch with the developer Colm McMullan at ‪@tiki_taka_co‬ or via www.tiki-taka.co.