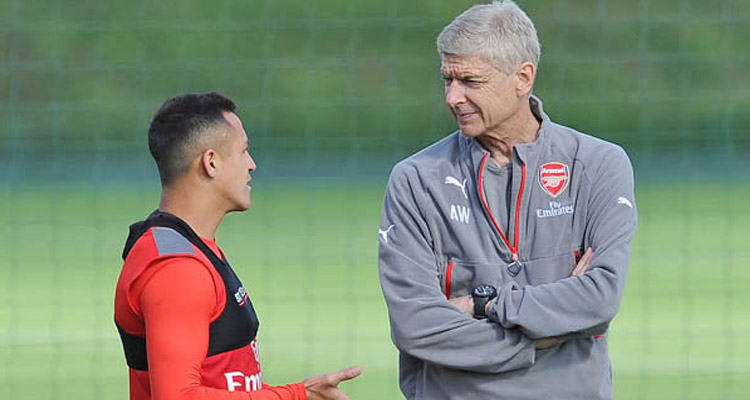 Pre-season continues today with the second and final game of the Australian tour. We face Western Sydney Wanderers and no doubt the manager will be using his squad to its fullest extent. The game kicks off this morning at 11, and I think it’s viewable via the official website, so that’s where you can check it out if you feel like that.

Meanwhile, the Alexis Sanchez situation is one which continues to cast a cloud over what has been a pretty sunny summer so far. We know there are other issues to sort out, Mesut Ozil and Alex Oxlade-Chamberlain in particular, but the future of last season’s top performer is something that is at the forefront of everybody’s mind.

Arsene Wenger was asked if he were positive the Chilean would remain with us next season, and he said:

Of course. There is not a lot to resolve at the moment with the player. I have spoken through text and it was very positive. My thoughts are always positive.

We have an exclusive for you this morning, the actual text/WhatsApp conversation between Wenger and Alexis. 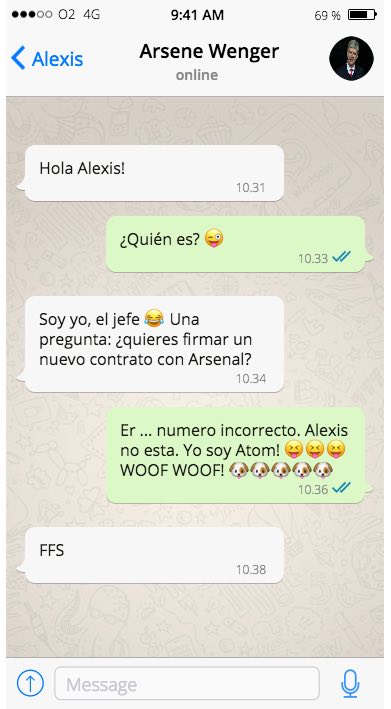 I guess the first thing to say is that Alexis staying with Arsenal next season is quite different from Alexis signing a new deal with Arsenal, and when he says there’s ‘not a lot to resolve at the moment’ I’m assuming that he’s waiting until the Chilean returns from his holiday to get into the nuts and bolts of further discussions about his future.

As we said on yesterday’s Arsecast Extra though, some clarity over these three contract situations must be found as soon as possible, because if history has taught us anything – including last year with Wenger himself – it’s that contract sagas that run throughout a season can be hugely disruptive on and off the pitch.

Arsene Wenger is by nature a positive person, who seems to be able to visualise the best outcome even when all evidence points to the contrary. We have been here before, the manager saying a player will stay before he does just the opposite – or the club make a decision which sees that become the outcome – but this one, in these circumstances, given our profile and resources, feels just a little bit different. Let’s see what happens.

Meanwhile, another player with under 12 months left on his current deal has been told to fight for his place at Arsenal. Wenger was referring this time to Jack Wilshere who he suggests will not be going anywhere this summer:

I think Jack will be with Arsenal next season, yes. I will give you a very focused answer on that, that he has to work hard to come back and fight for a place in the team. But once he is ready, when he comes back, he will not be far from practising with the team.

And we make the assumption that once he’s back in first team training he’s in contention for a place in the team. I think the interesting thing here is Wilshere being told to fight. Is that something he’s willing to do? It didn’t seem like he was prepared to do that last summer, insisting on a loan move to Bournemouth at a time when the Arsenal midfield was far from well-formed.

We had lots of options, with Cazorla, Ramsey, Elneny, Xhaka, Coquelin and Wilshere, but no fixed combination in there. As it turned out, Ramsey and Cazorla picked up injuries which would have really opened the door for Wilshere, but he wanted to go and Arsenal allowed it – something I maintain tells you a lot despite what people say about it being good for his fitness.

I said at the time I think it was the wrong move for his Arsenal career, and I stand by that. I think he’d have been better served getting his head down and trying to work his way back into the first team here. There were periods last season when we could have used a player with his skill-set, but instead he was plodding along in an average Bournemouth side doing very little.

Now, with under a year left on his current deal, and yet another injury to recover from, will he have the fight this time around? Can he see another year of his football career slip by as he sees out his contract and looks to leave on a Bosman next summer? Given his injury problems, he can’t be viewed as a reliable options for us, and I think this is a situation which looks increasingly like a parting of the ways might be best for all concerned. Maybe football can surprise us again but I’d have my doubts.

Finally, we continue to work hard on the potential signing of Thomas Lemar from Monaco. We’ve made an increased bid – which has been ignored apparently – but he does seem to be the main target at this moment in time. Chief Executive Ivan Gazidis told fans in Sydney, ‘Believe me, we are trying extremely hard to get him through.’

Given how many players seem to be on their way out Monaco this summer, you can understand how difficult this one might be to pull off. From what I hear the club are pretty confident though, so fingers crossed on this one. I think he’s a really exciting player, and I’d love to see him in our red and white next season.

Also, I can’t be the only one who thinks of this every time I see a story about Lemar? I am. Oh well!

Much more discussion of pre-season, the growing German influence at the club, transfers, and lots more in this week’s Arsecast Extra. Check it out below and have a great Saturday, more from me tomorrow.