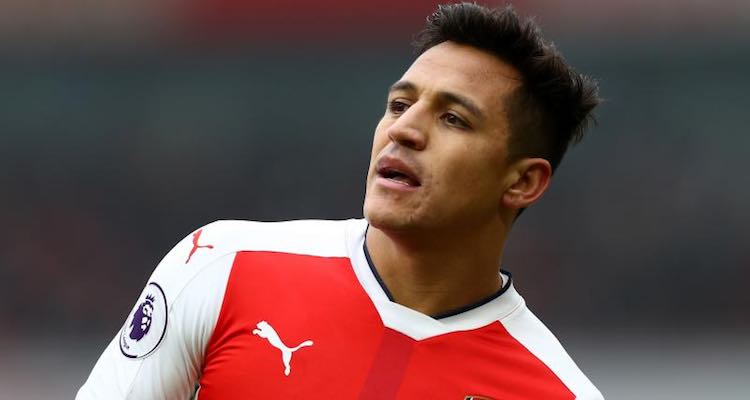 A quick Sunday round up for you as I mostly consist of what was last night definitely delicious red wine, but on reflection, does not feel as delicious. I also failed to heed Mrs Tom’s warnings that I should go to bed rather than snooze on our lovely, comfy, very snoozable sofa. I woke up on the couch at 2am, and I’m going to have a rough time of it today. Oops.

There’s not that much happening anyway as far as I can tell. The Mirror, amongst others, are reporting that Arsenal are ready to sell Alexis Sanchez to City for £80m, with the player himself having already agreed personal terms with the Manchester club. City have reportedly opened negotiations at £50m, but we’re holding out for £80m.

First of all, if he has agreed personal terms with them, that’s the very definition of “tapping up”. The rules say you may not speak to a player of another club who’s under contract until the January of the final year of their contract. Now, we all know this happens, how it works, how it goes on, and I’m sure the suggestion that City have had disussions with people representing the player are quite true, and also that it would be hypocritical to say that we’ve not done anything similar, before now, or will do so in the future. I think we do business rather more discreetly than some around, but I don’t think we can claim we’re paragons of virtue in that regard. You don’t often make a bid for a player unless you know he’s willing to come to your club (was Jamie Vardy an exception?). That doesn’t mean it’s right or okay though.

Sources “close to the player” claim that he’s motivated by wanting to play in the Champions’ League, which we, of course, famously failed to qualify for for the first time in twenty years, and not by the massive wages on offer at City. That may be partly true, but I find it hard to believe that the money City can afford to throw at the player isn’t a signficant factor in the equation. Given the difference in City’s valuation versus our own, we’ll have to see what happens, but per previous blogs, if we’re going to sell him to one of our rivals in the Premier League, it sends a significant message to our fans, our players, and other clubs.

Even were we to get City to £80m – or higher – it’s simply not a transfer I would sanction under any circumstances. He has one year left to play on his contract. Make him play it out, and then he can do what he likes. I’m not entirely convinced that’s how the club will see it though, something I’m sure City (and any other potential suitors) know fine well. Are “the business” really willling to risk losing out on a huge transfer fee for a player in the last year of his contract? That’s what City are gambling on. We’ll have to see whether the club have the balls to simply say thanks, but no thanks.

Martin Keown thinks if we do have said balls, Alexis isn’t the type to “down tools” over the issue, something else we’ve touched on. He’s said that unlike in previous seasons, where Arsene has been willing to let go want-away players, this time it could well be different because of the manager’s own situation:

I think he [Sanchez] is going to play, wherever he is, I don’t think he is the sort of lad who will down tools.

Wenger has two years to go now on his contract at Arsenal, and he will want that time spent with the best possible players – Sanchez is one of Europe’s best players.

Arsene Wenger is a little bit different to a lot of the managers I played under, and he does have a special bond with his players. [Robin] van Persie had a heart-to-heart with Wenger, and he let him go.

I feel this time around, he will not be letting him [Sanchez] or any of his other players go that he does not want to let go, and that is all time-linked to how long he has got left with Arsenal.

It’s a good point. Winning the Premier League is the only thing that will bring Arsene redemption with a large portion of the fanbase, and the idea of letting his best player go to a rival might well turn out to be the deciding factor, especially when you consider this may well be Arsene’s last chance to mount a serious and sustained push for the league championship (hey, it might happen). If the club are willing to let him go, it seems stupid to let it drag on and on though. They should tell City £80m, if that’s their number, or to shut their cake holes since he’s not for sale at any price. I realise City won’t shut up given such an ultimatum, but that’s what we should do.

That’s not to say I think we should do that. I don’t. I think the club should forcibly shove some shit cake sandwich in City’s flapping mouth and tell them he’s not for sale at any price, and tell Alexis that’s their decision, and that he’s free to go there on a free next season if he’s not willing to sign the £300k a week deal we’ve offered. It’s quite simple.

In other news, L’Equipe report that we’ve upped our bid for Thomas Lemar to €45m, which you’ll notice is only just over half what Monaco are reported to want for him, so at this point a deal still seems unlikely (unless, of course, we’ve agreed personal terms with him…but we wouldn’t do anything like that, would we?). The backup plan for Lemar is allegedly Riyad Mahrez, but with no official bid having been made (at least according to Leicester; the Mirror report we’ve offered £40m with Leicester wanting £50m) it seems we’re going to play out the Lemar scenario first. I suppose in some ways it makes sense. If we don’t get Lemar and do get Mahrez instead, at least Mahrez is familiar with the Premier League and should have less trouble integrating into the team. There is, of course, the danger we get neither, and that would be most unsatisfactory.

Finally for today, the Evening Standard report that both new boys, Lacazette and Sead Kolasinac, will travel to China on Arsenal’s pre-season tour, in what’s good news for their integration into the squad ahead of the coming season.

And that’s it from me. I’ve enjoyed your company this week. Andrew Allen will be back again tomorrow to fill in before Blogs is back from his Spanish supermarket shopping.

Have a good rest of your weekend, and I’ll see you again before too long no doubt.