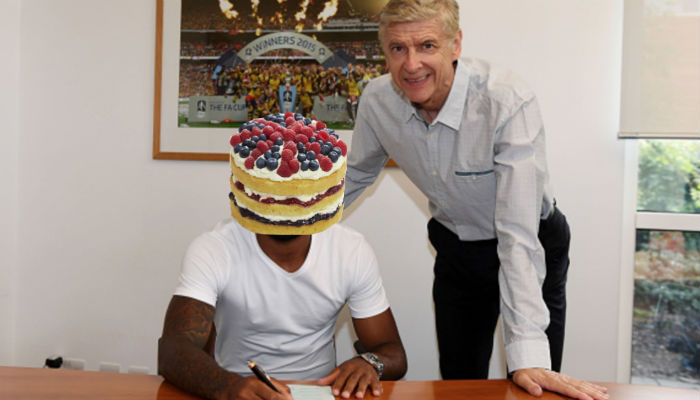 Morning all. The Arseblog baton is back in my hands now until Blogs returns from Spain on Wednesday. Cheers again to Tom for filling in again over the weekend.

I’ve woken up with one question on my mind – will there be more ‘pudding’ in the next few days? Last week, after a lot of talk, Ivan and Arsene finally brought out the dessert tray. And boy did we gorge.

First, we spotted Jens Lehmann, notebook in hand, working with Arsene on the training ground as the first team returned for pre-season. He’s now a member of our first team coaching staff and says he’s hoping to contribute positively.

Next, the club confirmed the record-signing of Alexandre Lacazette from Lyon. We’d known for a few days the deal was done but it’s always a relief to get these things over the line.

Then on Thursday, Per Mertesacker was confirmed as the future head of the Academy, a role he’ll inherit from Luke Hobbs who retains the position on an interim basis for the upcoming season. Understandably, he’s excited about the future.

Given there wasn’t any actual football to talk about, it was quite a week.

My concern is that, while I want more pudding, we may find that the next course on the menu isn’t so palatable. There are uncomfortable and complex decisions on the horizon.

The contract situations of Ozil, Sanchez and Oxlade-Chamberlain cast a shadow over everything at the moment. I think the German will renew, but I’m not nearly so confident about the other two, both of whom are wanted by domestic rivals.

On the off chance we persuade all three to sign new deals at the club on improved wages, it would inevitably have a knock on effect with regards to how we treat several other squad members. Basically, we can’t have our cake pudding and eat it.

In its simplest terms, the Premier League’s short term cost control (STCC) measures stipulate clubs must not increase their total salaries by £7 million each season. Admittedly, there are caveats to that rule (prove your commercial income is soaring for one) but if you double Ozil and Sanchez’s wages you’re way past that threshold.

Basically, we’re going to need to trim the wage bill and the head count. We simply don’t have space for all the first team squad members. As things stand we’ve 30 or so players that require registration for the new season and only 25 available places. As @ArsenalReport tweeted this week, that’s down to loan players returning and the likes of Holding, Chambers and Bellerin outgrowing their under-21 status.

Yes, we can loan out players again or in some cases not register them (I’m looking at you Debuchy) but the most efficient option would be to sell the dead wood. Of course, potential suitors know this and consequently have us over a barrel when it comes to negotiating fees, particularly for those guys entering the final 12 months of their contract.

Once upon a time we might have expected a decent bounty from selling the likes of Wilshere, Jenkinson, Gibbs, Campbell and Szczesny. That’s probably not the case anymore.

It’s possibly why we’re willing to offload someone like Olivier Giroud despite him being a key squad member. It’s just easier. He’s on big wages, he’s the wrong side of 30 and because he can’t walk away on a free next summer clubs have to come up with a decent offer. He’s still being linked with a £20 million move to big-spending Everton.

On a more positive note, we’re edging closer to actual football. A 25-man squad, including new boy Lacazette, is currently winging its way to Australia ahead of friendly matches with Sydney FC and Western Sydney Wanderers. You can check out the full list of those who’ve travelled here.

It’s the first time in 30 40 years that an Arsenal squad has been Down Under. On that occasion we lost 3-1 to the Australia national team – Geordie Armstrong getting a consolation goal for a Gunners team that featured the likes of Pat Rice, Liam Brady, Graham Rix, Malcolm Macdonald and Frank Stapleton amongst others.

As well as the two matches, we can look forward to the boss shedding some light on his new appointments and why certain players didn’t make the trip. We’re also due to launch that monstrous black and pink third kit. Keep your eyes peeled on Arseblog News for updates.

Right, that’s your lot for today. Enjoy your Monday. I have to attend the day job…urgh!