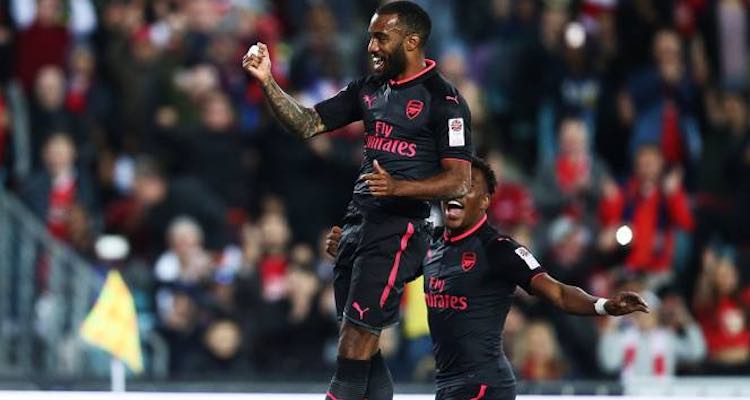 Hello everyone, we got our first taste of pre-season football yesterday as we took on Sydney FC of Sydney in Sydney.

Arsenal ran out 2-0 winners thanks to goals from Per Mertesacker and new boy Alexandre Lacazette (watch them here). I only caught the last 20 minutes or so, just at the point where it got a bit chaotic. Arsene Wenger replaced almost all the outfield players, we had Mohamed Elneny playing at centre-half, and there’s really not a lot of analysis you can do of a game like that.

While I’m of the opinion that writing off pre-season games as meaningless isn’t quite right, there’s also a tendency for people to read a bit too much into them. Half-time player ratings and all that aren’t really necessary.

They are primarily training exercises, getting people fit and match sharp again, but where I do think you can take a bit more time is with some of the young players who are given opportunities. For them pre-season is about more than fitness, it gives them a chance to play in front of big crowds, with established first team players, and to show the manager what they can do in those circumstances.

There were a couple of players yesterday who, by all accounts, stood out. Joe Willock in midfield, and Reiss Nelson, an exciting attacking midfielder. The manager spoke about the latter in particular, and the confidence he showed during the game:

Since I’ve been in the game I’ve understood that you either have that at 17 years of age or you don’t.

Some of the players I’ve had in my career have turned 18 years old and it seems natural for them to be on the pitch. They just think, ‘Let’s play’ and Reiss behaves like that.

He then said some of the young players were ‘close’ to first team action, which will raise some eyebrows, but a) I think he says it for it to become something of a carrot to dangle in front of them, and b) with the League Cup and the less intense Europa League on the horizon, there will be more chances for some young players to impress. I don’t think there are too many of them ready for Premier League action week in week out just yet, so I wouldn’t get too stressed about us looking for the fabled ‘internal solutions’.

There was also a Lacazette goal on his ‘debut’, although his actual debut won’t be marked until he plays a competitive game. It was, perhaps, a snapshot of what he might bring. Sharp movement inside the box and an sharp, if relatively simple, finish from close range, but there’s a long way to go before we can start making any real judgements.

A lot of people were Tweeting about the reaction of Olivier Giroud to the Lacazette goal. While others ran and celebrated, he didn’t react when the ball hit the net at all, leading some to suggest he was crotchety because the £50m man, who is likely to restrict his playing time even further, scored a goal.

If you keep watching he does go over, and does have a little congratulatory pat for him, but I suspect bigger questions would have been asked if he had leapt in the air and celebrated like this was a strike of huge importance in a massive game rather than a fairly routine finish in a pre-season friendly. It doesn’t go much deeper than that.

I think he knows what’s what anyway, and it seems more and more likely that he’ll be playing his football elsewhere next season. Amid rumours of Everton, West Ham and even Borussia Dortmund, he sounded almost resigned to a departure:

At the moment I’m still an Arsenal player so I’ll try to be professional like always and prepare well for next season. I don’t know about my future so I can’t tell you more.

It is true that I really enjoyed my five years with Arsenal. I try to be professional. No matter what happens, I did my job on the pitch.

To me that sounds like a man who knows that if he wants the football he needs in a season ahead of a World Cup, he’s going to have to go elsewhere. While I can understand that, my worry would be that it might leave us a little light up top, and regardless of what you think of Giroud, he’s a reliable goalscorer. He’s not prolific, but he gives this team a decent amount of goals each season, not to mention a superb option from the bench, so I’d be more inclined to keep him than move him on.

Anyway, there’s another game in Australia tomorrow when we face Western Sydney Wanderers, then it’s off to China for games against Bayern Munich (WHY?!) and Chelsea (BOOO!). For those fans down under who got to see the team in the flesh for the first time, it will have been a fantastic experience, and the manager was keen to offer them due praise for the support. No doubt many will out in force again for the second game of the tour.

For some extra reading this morning, Tim Stillman takes a look at the Alexis Sanchez situation, and asks if the ups the Chilean provides outweigh some of the negatives. Interesting reading.

Finally, James and I will have an Arsecast Extra for you this morning. If you have any questions or topics for discussion, please send them to @gunnerblog and @arseblog with the hashtag #arsecastextra.

We’ll have that for before lunch, until then.