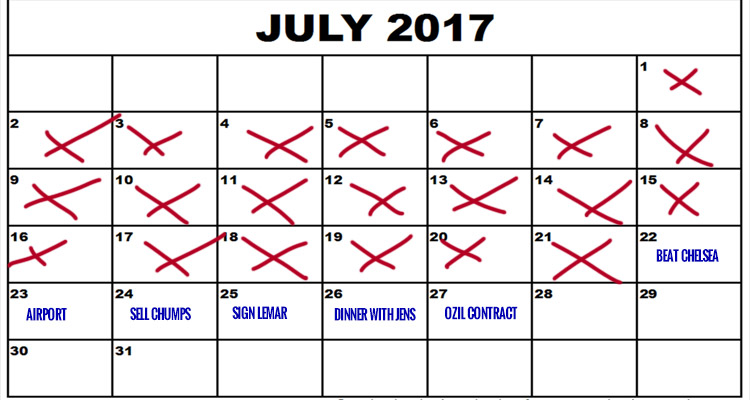 Is next week going to be the week when things really start moving in the transfer market? I don’t know, but it could be.

Despite the fact there’s constant communication wherever you are in the world these days, it feels like it’s more difficult to do deals when the manager and the Chief Executive are thousands of miles away from London. Yes, Dick ‘DICKY’ Law is probably holding the fort back home, but ultimately the final say has to come from Arsene Wenger and/or Ivan Gazidis, and as I wrote earlier this week there’s still such a lot to sort out.

We have the players who could well be on the way out: Kieran Gibbs, Jack Wilshere, Mathieu Debuchy, Carl Jenkinson, Calum Chambers – subject of a £16m bid from Crystal Palace – and Lucas Perez all need to find somewhere else to play their football next season. Yes, we’ve sold Wojciech Szczesny to Juventus but that was a deal that seemed to have been on the cards for some time, and just needed completion.

For most of the above, there hasn’t been much in the way of interest from elsewhere. Kieran Gibbs has been linked with West Brom and Mathieu Debuchy almost moved to Nice before that fell apart, but that seems to be about it. It feels like we’re going to have to be a bit more proactive if we want to move these players on. Not so much waiting for offers to come in, but offer them around to clubs who are looking for players in those positions. Take what we can get.

Then there are the contract situations of Mesut Ozil, Alex Oxlade-Chamberlain and Alexis Sanchez. The first two might well be on tour, and there’s a good chance for the manager to talk to them and convince them to sign new deals if that’s what he wants, but the agents are not there. Reports this morning say that the club are increasingly confident of the German committing to new terms, but it’s not something that’s going to happen until we get back.

As for Alexis, our expressed desire to keep him is clear , but he’s not due back to London for another week or so (I could be wrong here), and it seems unlikely that anything is going to go down one way or the other until he does. Thankfully we’ve got plenty to keep us busy until then.

Then there are incomings. We all know the links to Thomas Lemar, and he’s a really exciting player who would be a fantastic addition to the squad. Monaco are showing some mettle in the transfer market, turning down a £44.5m bid from Man City for Benjamin Mendy because they quite rightly value him higher than the £50m City paid for Kyle Walker. A classic case of making your bed and having to lie in it, because if you’re prepared to pay that much money for a player who is very good at running and not much else, why should you get someone better for cheaper?

Whether that makes it easier for us to get Lemar remains to be seen but if we’re serious about him we should be going in now with a bid that will make Monaco seriously consider a sale before City come back with more for Mendy. Which they probably will because money is no object to them.

However, as much as I want us to sign him, I really feel like the one addition we need to make to the squad now is a central midfield player. We have a decent pairing in Aaron Ramsey and Granit Xhaka, but between injury and suspension they missed a lot of football last season. With some luck over fitness and greater discipline they won’t be sidelined so often next season but it’s still something to consider. We have the squad options, the guys like Coquelin and Elneny who give us depth and cover. I’m sadly writing off Santi Cazorla and if we see him again then it’ll be a great bonus, and I’m making the assumption that Wilshere will be off provided we can find someone to take him.

So, to me it feels like we’re a bit light here in terms of quality. A really top class addition in this area would, I think, pretty much complete the squad going into the new season. It’s an area in which I think we can certainly improve. As much as I like Xhaka and Ramsey, and I do, there’s room for one more player in here. Not a squad player, not a safety option, but the kind of signing that could well be transformative for this team and how it’s set up.

Now, I don’t know who that player is, to be honest, but if we were to sign Lemar and add a central midfielder to the team (not squad), I’d feel quite confident ahead of the new campaign. At the start of the summer there were a lot of whispers about how we were targetting a ‘number 8’, with serious interest in Schalke’s Leon Goretzka. Bayern have joined that chase and they tend to win out when it comes to signing Germany’s best young talent, but in general it’s gone a bit quiet when it comes to this kind of signing.

Hopefully it’s something that’s still on the cards, maybe just a bit on the back-burner now because we have so many other things to sort out. Which is why next week isn’t just a return to safer climes, it’s a return to the daily grind to get as much done as possible, because there’s such a lot to do.

Right, that’s that for this morning. News throughout the day on Arseblog News, and I’ll be back with more tomorrow.

A transfer Silva lining, mad money, and Lehmann’s impact on the squad