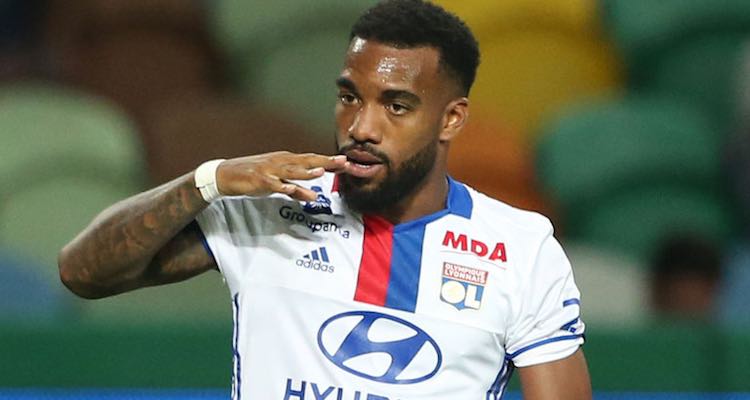 The big news this morning is that Alexandre Lacazette is set to become an Arsenal player, with a deal more or less done between us and Lyon. Despite all the talking from their president, the will-he? won’t-he? shake-it-all-abouty, it seems we’re set to break the club’s transfer record for the 26 year old striker.

Some reports put the fee at around €60m, including add-ons etc, which would substantially bypass the £42.5m we spent on Mesut Ozil in 2013. Given how the transfer market has become so grossly inflated in the last couple of years in particular, I don’t think there’s much we can read into this. That’s just what that kind of money gets you these days.

It’s expected to go through early next week, and the French international will become the second arrival of the summer after the free transfer of Bosnian defender Sead Kolasinac last month. It’s also likely to spark a departure from the forward line.

If Olivier Giroud is anxious about getting more playing time then he’ll be even more so when Lacazette signs: I’m making the assumption here that a) we’re not spending €60m on a player not to start him and b) we are actually going to play a 36 goal striker as a striker and not as a wide man.

There have been plenty of rumours linking Giroud with a move back to Ligue 1, as well as interest from West Ham, so it wouldn’t be a surprise to me if he were sold as a consequence of this deal. It’s one that should start the Arsenal transfer ball really rolling, because there’s still plenty to do of course.

For more on Lacazette, check out James’ video with French football expert Andrew Gibney in which he gives the low down on the Lyon man.

Meanwhile, as Alexis Sanchez prepares for tomorrow’s Confederations Cup final, he says he knows what he wants to do this summer. Asked if he was clear about his intentions, he told a Sky Sports reporter:

Yes it’s clear, but I can’t tell you.

We’ve been here before down the years, and I don’t think you need to be an expert at reading between the lines to know what he probably wants to do. I suppose the only thing I’d say is that what he wants to do and what he’s allowed to do are two different things. If he wants to go to Man City, then it’s very much a case of ‘tough shit’. If he wants to go abroad, he’s got to find a club willing to pay the transfer fee.

So, I don’t think his departure is quite as clear cut as some people think. As I wrote earlier in the week, I’d love for Arsenal to show some real backbone this summer, and if it means keeping him for the final year of his contract – something Arsene Wenger has said more than once that he’s willing to do – then so be it.

He’ll obviously take some time off after the final, in as much as he takes time off (prepare yourself for Instagram videos of him running up mountains), and hopefully during that period we can get some clarity on his future because it is an issue that casts a shadow over our summer.

It’s also worth remembering that Mesut Ozil and Alex Oxlade-Chamberlain are in identical contract situations, and decisions have to be made over Jack Wilshere, Wojciech Szczesny and Kieran Gibbs who also are into the final 12 months of their current deals. Chop chop.

In the European Under 21 Championships there was heartbreak for Hector as Spain went down 1-0 to Germany. He said of his summer plans:

I don’t think there’s much to worry about there really. Even if he’s had Barcelona in his ear, via their various back-channels and one of their players in the Spain U21 squad, the reality of his situation is that Arsenal are not willing to sell him and he signed a 6 year deal just over 6 months ago. It might have got a bit flirty but once he’s back home in the warm familiar bosom of Arsenal he’ll be grand.

Right, that is that for this morning. Have a great Saturday, more from me tomorrow.