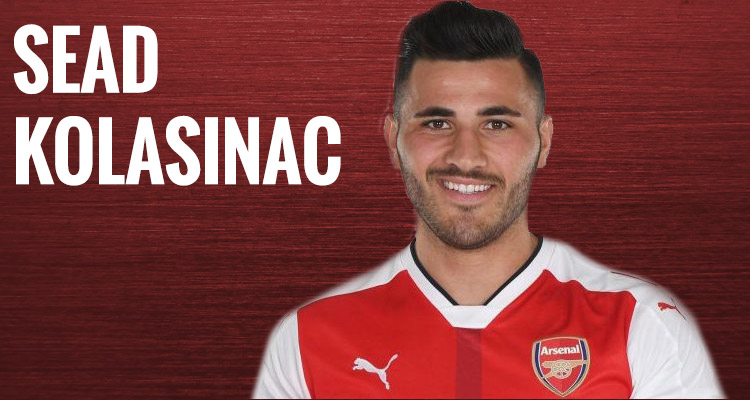 We made our first signing of the summer yesterday as Sead Kolasinac’s free transfer from Schalke was confirmed. The 23 year old will officially become an Arsenal player on July 1st, as we look to boost our left-side defensive options. He was named in the Bundesliga team of the season, and if you haven’t ever seen him play, there’s a video here which showcases what he’s about.

I have to say I like the look of him. He’s clearly very physically different from what we’ve got right now. Kieran Gibbs and Nacho Monreal are more slight, this guy is like a monster truck. He’s a Bosnian freight train. An eastern-European draught horse. An Adriatic armoured-tank. A Sarajevo SUV (he’s not from Sarajevo, he was born in Germany and chose to play for Bosnia due to parentage, but we’re on a roll here).

Suffice to say, he’s got some bulk about him and he looks like the kind of player that others just bounce off. Like, you could imagine Jesus Navas – now sadly departed from the Premier League – or someone of that ilk trying to run past him and getting a good old fashioned shoulder.

“Excuse me, can someone please pick up Mr Navas (or his ilk) from row Z?”

He’s not just physical though, he looks good on the ball, he had 7 assists last season too – even if some say that his strengths are far more defensive than attacking. A left-back, left-wing back, and possibly a left-sided centre-half in a back three means he’s pretty versatile. For more, check out this profile of him on Arseblog News.

The player himself said:

I also liked the bit when asked about what his greatest strength as a player was:

I think my main strength is my mentality. I’m a player who will try to help the team as well as I can. My strengths are my mentality.

His greatest strength is MENTAL STRENGTH! Hallelujah, at last we’ve addressed that long-standing issue. I look forward to other new signings telling us their best qualities are ‘I don’t have a handbrake’ and ‘I have an actual surplus of sharpness so I never lack a little bit sharpness’.

And people thought we could never change. All in all this seems like a good deal. We’ve brought in a player of some potential for free, leaving more of that transfer budget for the other things we’ve got to do this summer, and if rumours are right we might well need every single penny we can get our hands on.

It’s a move that probably spells the end for Kieran Gibbs at the club. With Nacho Monreal insisting that he’s going nowhere, it’s the England man who will be deemed replaceable. It’s no surprise really, he’s spent most of the last two seasons kicking his heels on the bench, and as much as anything he’ll need a change of scenery to kick-start his career. I’m not sure the £15m bid from Newcastle is that serious. They may well be interested, but I suspect any fee will be lower than that.

Interestingly, or not, there weren’t any quotes from Arsene Wenger about the new signing. Perhaps in this day and age where every last bit of ‘content’ is squeezed out of everything, they’re waiting to run separate stories on that. There’s usually something in the announcement from the manager though, so it’s a bit unusual, although I may just be overthinking this. It could be that when he’s actually an Arsenal player on July 1st that he’ll wax lyrical about him, so let’s wait and see.

Meanwhile, there have been some shenanigans in Spain with El Mundo Deportivo doing an interview with Hector Bellerin and asking him about 500 questions like: “You see, my wife, she has been most vocal on the subject of the Bellerin. “Where’s the Bellerin? “When are you going to get the Bellerin?” “Why aren’t you getting the Bellerin now?” And so on. So please, the Bellerin.”

Inevitably, when you’re asked that many questions, there are only so many ways you can bat them away. That said, Hector did wag his tail at the idea of moving there a bit, but given that he signed a 6 year contract last November, we’re in a very strong position and the idea of selling him, even if the Ox is set to renew his contract, is fanciful.

We have a full transcript of the interview here, and I have to say I found the bit where the manager told him he preferred a different type of player for the new system quite interesting. Especially as Bellerin is a cracking candidate for a wing-back in a three at the back formation. Is it that which has given him some pause for thought? Anyway, I have no doubt Barcelona are interested, but unless they offer something ridiculous, I just cannot see a deal going down.

The manager might also have to have a conversation with Olivier Giroud who says he still wants to win things with Arsenal, but doesn’t want another season where his playing time is so limited. You can understand that, a player wanting to play more regularly, but he too signed a new deal in January, and as a squad option he is very handy indeed. He may have to accept that role but again much will depend on what we do in the market.

Right, that’s your lot for this morning, more from me tomorrow.