Some questions I have been asked this week

Good morning to you all. In the absence of any real Arsenal news, I thought I’d take this opportunity to answer some questions that have been asked of me this week.

I have no idea. The Lyon president sure does a lot of talking about stuff. Yesterday there were reports that he’d said he had a nice offer from Arsenal, then it seemed he didn’t say that at all. Tomorrow he’ll say something that will spark a load of headlines, then say something completely different the next day. He’s all mysterious and shit.

As for Lacazette, look I know he scored 36 goals last season, and you know he may well turn out to be a very decent acquisition. Maybe now the time is right for him to leave France and come to the Premier League and tear things up, but right now signing him would feel underwhelming. Like if you were a kid and you really wanted a puppy and your parents kept saying no but then one day they surprised you with one except it wasn’t a puppy it was a cushion.

Are we really going to let Olivier Giroud go?

Yes. No. I don’t know. Maybe. Perhaps. Unquestionably. All of those things. According to this morning’s L’Equipe, the HFB is not part of Arsene Wenger’s plans for next season, and he is willing to sell him. Lyon are said to be interested – in a part exchange deal for a cushion, I believe – and there’s talk of West Ham wanting to sign him too.

I like Giroud. Sure, he’s not quick, but he’s good at what he does and there aren’t too many players like him around. Ok, there are. There are loads of players like him in fact. Big, strong, relatively immobile centre-forwards are everywhere, but most of them are playing Sunday League football. He happens to be one of the few who can do it at the top level.

Do I want him as our starting striker? No sir, I do not. Would I like him as a player who can come off the bench and make an impact. Yes, yes I would. He could also be the perfect guy for those Europa League group games against Metallurg Osterberg, Katowice Krackers and FC Spleen.

On the other hand, my Arseblog News colleague Andrew Allen pointed out to me the other day that if he did go this summer he would depart on 98 goals. This, he claimed, would upset him in the same way that Paul Merson leaving on 99 did. That lovely glistening 100 mark so close but forever locked away behind a force-field of unreachability. So, there is that.

We all know the story from years ago, Arsenal were very interested, he was close to moving to London, but then Manchester United came in and offered about three times as much to Sporting Lisbon and he went there. Now he wants to leave Real Madrid, taking umbrage that he, a multi-multi-multi millionaire should pay his fair share of taxes.

The thing is, he’s 32 and wherever he goes he will want to play Champions League football. Sure, the Europa League is the one thing missing from his career but it’d be a waste of time to even bother so no, we shouldn’t try. We have things which are actually achievable to take care of.

Alexis and Ozil are in a promotional picture for the new kit. Does this mean they’re staying? 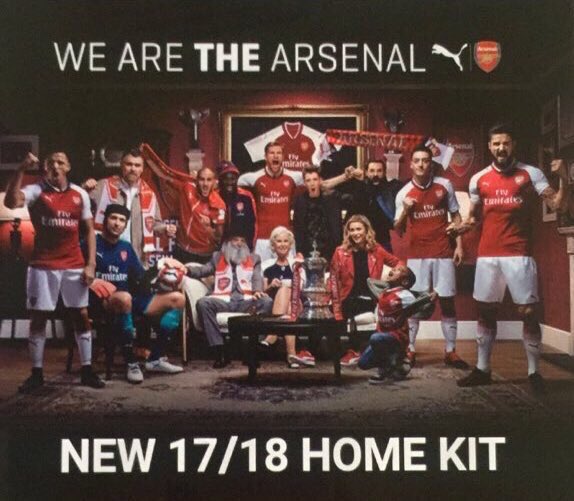 Yes, it means they’re staying. It also means that we’ve signed Elsie Plopper, Bob Beardsome, Scarfy O’Toole, and all the rest of that motley crew in the picture. This is the catalyst for change that Ivan Gazidis was really talking about. We’ve had enough of trying to win the league with professional footballers, so this is a new, exciting direction for the club.

Seriously though, I wouldn’t read very much into this at all. It’s something that was probably prepared months ago, and is likely a composite of all different pictures made to look like they were all there at the same time.

I seem to recall a previous kit picture which was released in the early spring/summer which had Adebayor in it and then we sold Adebayor to Man City so I don’t think there’s much to be gleaned from this. Unless you’re a fan of Bob Beardsome.

What time is love?

When are you going to update your apps for iOS and Android?

Hey, it’s funny you should ask, because both of them got updated yesterday. The Android update means the blog will work properly again after we made some changes without thinking about them – get that here.

The iOS update ensures the same but will now display videos in articles properly – get it here.

Thanks so much to Matt and Simon, the developers, for lessening the impact of my thoughtlessness and ineptitude.

Or Frosties. But probably not.

Right, I’m off to the park with the dog. Have a good one folks.