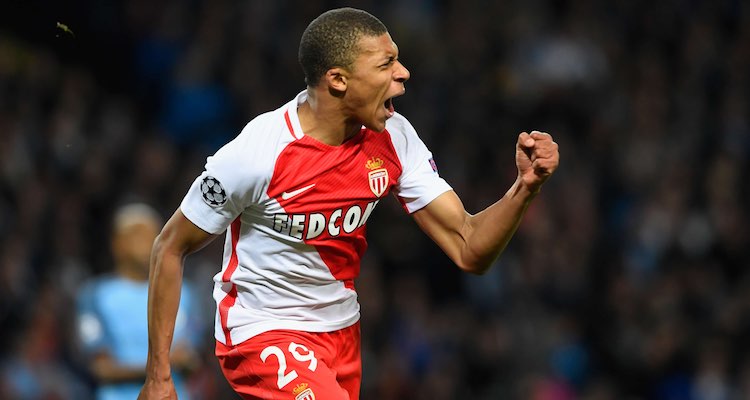 Despite things being pretty quiet on the transfer front stories emerged yesterday which said that Arsenal are becoming ‘increasingly confident’ of signing Kylian Mbappe from Monaco. I am somewhat dubious about said stories, although I do know that he is a player that Arsene Wenger covets, and our interest in him is genuine.

L’Equipe say that the manager has spoken directly to the player, and if he can convince him to join a Europa League club, Monaco to sell, and Arsenal to splash that amount of cash, it’ll be some achievement and a testament to his powers of persuasion. I think the prospect of him achieving those three things is almost impossible, however Mbappe is the name on everybody’s Mblips, but as with any deal like this there are positives and negatives, so I thought I’d look at the pros and cons of signing him and doing a deal of this size.

The player: He’s clearly an exceptional talent, a hugely exciting striker who could, under Wenger, develop the same way we’ve seen with other young French players. Thierry Henry is the obvious one, but Nicolas Anelka too flourished quickly before his career became cash-nomadic. Arsenal have long needed something special up front, he could be that guy. Arsenal also seems like a good fit for him, even if I say that with red and white tinted glasses on, and would enable him to develop as a player without the crushing intensity that exists at a club like Real Madrid.

The statement: If Arsenal were to pay a world record transfer fee, beating off Real Madrid in the process, it would really make people sit up and take notice. If this is what we were now prepared to do, it would set a new benchmark for us and show that we’re prepared to put our money where our mouth is.

The impact: It might also show players like Alexis Sanchez and Mesut Ozil that as a club we’re serious about being competitive in the Premier League and hopefully the Champions League next season. That may then make them more inclined to sign new deals, because it would be easier to be that competitive than without them. It would also make Arsenal appear a more attractive destination to other top players.

The WOW factor: Ultimately football is entertainment. People pay their money, they go and watch and they want to be entertained. Arsenal splashing £100m+ on the most exciting teenage talent in Europe would invigorate fans who have found what the club has served up in recent seasons quite staid. Certainly in the Premier League and Champions League. The FA Cup has become a delicious aside. A signing like this would put bums on seats, as they say, and significantly alter the perception of the club, the manager and the people at board level.

The cost: When Arsene Wenger went to visit Kylian Mbappe last year, he did so knowing that if he could persuade the then 17 year old to join Arsenal he could get him for a reasonable fee. I’m not sure of the exact timing of that meeting, but the player signed his first professional deal with Monaco in February, so the idea of stealing him for nothing would have been dependent on him not signing that deal and leaving on a free in the summer.

Eyebrows would have been raised if we’d spent a significant amount on another promising youngster from France, but his performances for Monaco last season show it would probably have been worth it. Now, we’re talking a fee in excess of £100, perhaps £120-£140m. For an 18 year old who would, if he joined Arsenal, probably see it as a stepping stone to a bigger club somewhere down the line.

That’s one side of it. Then there’s the wages. If you make a world record signing you’re not going to pay him anything other than wages commensurate with that. The knock-on effects are obvious. You have a highly talented by raw 18 year old earning above and beyond what more senior players are getting. That’s a situation you have to manage carefully, but ultimately it means that across the board your wages go up as some measure of parity is found.

It also clearly impacts the ability of the club to do other business. Arsenal are wealthy, but our pockets are not limitless. Yes, there are players we can and should move on to free up more funds, but let’s not pretend a deal of this size wouldn’t stretch us.

I suspect there would be some kind of release clause inserted into any deal we managed to do, but there are no guarantees we could profit from a sale. Selling a £500,000 Anelka for £23m was remarkable business, trying to do anything similar with a £120m player is far more onerous.

The pressure: Mbappe seems like a level-headed young man, and he’ll be told that the transfer fee is not something which he should worry about. Older, more experienced players than him have found a big fee something of a millstone around their necks though, and with that kind of money comes expectation in terms of performance. He will be in the spotlight for every second of every game, and under the microscope off the pitch too. Add to that the fact he has to adapt to a new country, learn a new language, and all the other things associated with a move of this kind then it’s plenty for him to deal with.

The risks: Every transfer is a gamble in some way. He could pop a cruciate or get Shawcrossed in his second game. I don’t suppose you can really think like that, otherwise you’d never do anything, but it is the reality of it. There’s also the fact he’s a young player who has a lot of learning to do. Perhaps he’s such a prodigy that he’ll hit the ground running and start banging in the goals immediately, but it’s also possible that he won’t truly flourish for a few years. Can an Arsenal team from whom much is expected afford to develop a player through those seasons where things don’t quite click?

Would Arsenal, at this moment in time, be better spending that kind of money on a couple of £50-60m players who would add established quality to the side in a couple of positions, rather than throwing it all on one young man? Despite the disappointment of last season, we did get 75 points in the Premier League, and we need players who can help us make up the shortfall on the winners immediately.

Of course it’s finding those players that remains the big issue. Especially if someone like Alexandre Lacazette, a player we could have had for half that price any time in the last few years, is now in that kind of price range. Maybe if that’s the level of the £60m player, you’re better off going large on one exceptional talent.

It’s definitely a complicated one. On a very visceral level I’d love us to do it, for all the risks etc, because of what it would say about us as a club and because we’d be getting such an exciting player. When you think about it objectively and realistically though, the cons probably outweigh the pros.

So, while I’m in the PRO camp, it’s whether or not a club and a manager who are usually fairly risk averse can throw off those shackles and go for it. I doubt it to be honest, but let’s see.

Right, that’s that. We’ll have all the news throughout the day over on Arseblog News. More from me tomorrow.