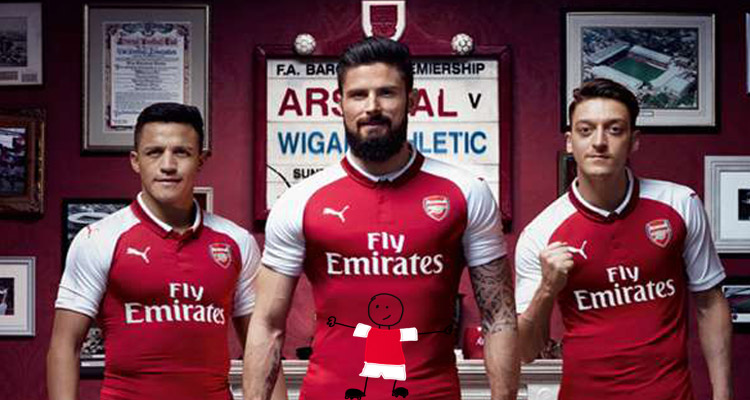 People often look down their noses at football fans, assuming them to be limited in their world view, but that does us a disservice. We’re into all kinds of other things such as:

Yesterday saw the launch of the new home kit. It is a red shirt with white sleeves, with some shorts and some socks. They’ve really pushed the boat out this year.

As ever though the thing was hyped-up, stage-managed, and marketing people got to do their thing. The Puma marketing people in particular had a jolly old time of it, with what has to be one of the worst press releases I think I’ve ever seen … for anything. Ever. EVER.

They wanted to harness the THE – as in THE Arsenal – but whoever was sitting around that table thinking up the ideas really didn’t get it. You can read all of them here, but no joke, these are a few of the examples they came up with:

It’s like they gave the brief to some people who were vaguely aware of Arsenal as a concept, then let those people take a lot of cocaine as they sat around with their suit pants that are too short and with their no socks on with their overly shiny shoes and then they took some more cocaine and thought they were doing a great job and they came up with that.

Having presented it to their bosses, who were obviously taking more cocaine than their subordinates, it was signed off and belched into the world yesterday. Uncle Arsene? Petr Cech’s helmet? Monopoly?!

Basically anyone involved in this campaign needs to be sent into space – condemned for all eternity to travel across the universe in a spinning mirror yolk like General Zod in Superman. That should give them enough time to think about what they’ve done.

Still, Robert Pires was there, and he spoke to Tim Stillman about life at Arsenal, how he’d like to come back in a more official capacity that just training with the chaps every day, and what he’d like to see the club do in the transfer market this summer. He says signing Kylian Mbappe is not impossible, talks up Lacazette and Dembele (the Dortmund variety – there are so many Dembeles nowadays, they’re the new Thiagos), and Thomas Lemar:

He can play on the left and the right, he has great ability with the ball. He can cross and is very good at providing assists. I think he could fit in in the Premier League, but at especially at Arsenal.

Of course we are still waiting for the club make its first big moves in the transfer market this summer. There’s been one addition on a free transfer and beyond that nothing else. Nobody has come in, nobody has gone out. When you consider that it’s just over three weeks since the end of the season – when we won the FA Cup, by the way, making John Terry sad – I’m not stressed out by any means, but there’s still an awful lot to do so I’m just hopeful they’re on top of it all.

Kit launches also allow people to speculate like crazy. If we have pictures of Alexis and Ozil wearing the new shirt, does that mean they’re more likely to stay? Or, does it mean they just carried out some contractual duties that may well have been written into their deals when they signed?

People lost their shit yesterday when the kit builder on the club shop mistakenly showed Danny Welbeck as number 7. This was corrected quickly, but not quickly enough to prevent a hundred billion and seventy five million trillion clickbait articles about something everyone knew was just a technical mistake. Is Welbeck moving to 7? No. It also doesn’t mean Alexis is leaving. I mean, he could leave this summer, but it has nothing to do with this.

At the same time, despite Joel Campbell being an available option if you want to buy one of the new shirts with a player name and number on it, you can’t get a Jack Wilshere, a Wojciech Szczesny or a Mathieu Debuchy. Does that suggest they’re off this summer, the club unwilling to sell shirts with names they know they might have to refund? Maybe. Perhaps. I don’t know. As I said, stuff like this lets us speculate like crazy.

We are reading between the lines like a mad thing. In much the same way as we do when quotes, purportedly from an Mbappe family member, emerge:

Wenger is a great man. If Kylian signs tomorrow for Arsenal, it will be down to him. He has the experience of shaping young talent, especially former France strikers like Thierry Henry and Nicolas Anelka. The Europa League is not an obstacle in itself.

Said family member also referred to Arsenal as an ‘intermediate club’, a stepping stone to one of the big boys like Real Madrid and Barcelona, which has upset some fans. Not me though. As much as I love my club, to even think we operate on the same level as either of those two is fanciful in the extreme. And would I take Mbappe for a few seasons before he went there? Absolutely. Maybe he’d help us close the gap a bit.

Anyway, let’s see what they come up with as the summer progresses. Right, that’s your lot for this morning, have a good  one.