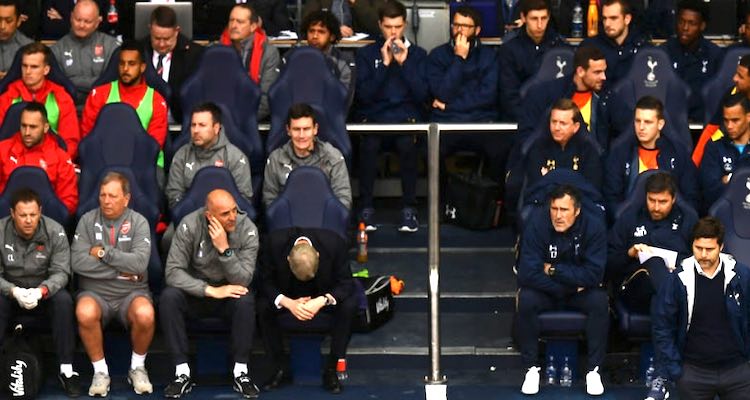 It’s very rare, even after poor results or performances, that I dread writing this blog, but today is one of those days. I’m not even sure where to begin. I think I might just say thanks to Petr Cech because without him yesterday would have been an absolute embarrassment.

It was bad enough anyway, but the Arsenal keeper made a string of outstanding saves to keep a rampant Sp*rs side at bay. Side is the wrong word actually – team is the word I should have used, because that’s what they are.

An organised, hard-working, focused, team who know what it is they should be doing, and how to do it. Compare and contrast to Arsenal’s individuals, some of them playing for themselves and nobody else. They’re not helped by the fact they really don’t have a clue what way they’re supposed to be playing in a system that is unfamiliar, and one that the manager has just used because he had nothing left in the tank.

The move to a back three brought about three wins. We scraped a 2-1 at Boro, beat Man City in the FA Cup semi-final – a performance which showed some actual promise – and then required a goal off Robert Huth’s nipple to beat Leicester.

Arsene Wenger said he used it to help refocus the players but the reality is he did it because there was nothing left to try. It’s not something he’s serious about, because if you’re serious about it you don’t shuffle around with the three centre-halves after a confidence boosting semi-final win. You don’t leave out Rob Holding, who had been a real positive at Wembley, and drop him from the squad altogether.

You don’t play Nacho Monreal – much as I like him and I think he’s a good, hard-working player – as a centre-half against Sp*rs, using Kieran Gibbs as left wing-back. Gibbs was starting his second consecutive game for two years yesterday. It’s not to be critical of him, because he’s not picking the team, but a manager who really wanted to give three at the back a real go would have played Monreal on the left, where he was so good against City, and had a real centre-half, Holding, alongside Koscielny and Gabriel.

The fact that we moved to a back four during the Leicester game and at White Hart Lane yesterday shows he’s not serious about it. When Philippe Auclair referred to Arsene Wenger as a ‘jazzer’ at one of our live podcasts, it made perfect sense. This back three attempt is no Charlie Parker, much more lame-Duck Ellington. It’s terrible screeching trumpet noises played by a man with emphysema and with toes for fingers.

They should have been ahead in the first half. Dele Alli, under some pressure from Oxlade-Chamberlain to be fair, headed wide from close range, and Christian Eriksen volleyed over minutes later when we’d been opened up by their pace and running power.

Our attack, such as it was, was predictable and pedestrian with Giroud lumbering about up front like a disgruntled Ent, and outside him Alexis Sanchez looked keen to break some kind of record as to how many times he could give the ball away. Sadly for him he had to share his grand total of twenty (2o!) with Oxlade-Chamberlain and Gibbs.

Aaron Ramsey forced Lloris into a relatively easy save, but the warning signs were there. If it felt like the occasion might be getting to them, manifested in those missed chances, they just kept going and got the goals they deserved. There was a lot of standing around for their opener, Eriksen dancing between the Arsenal defenders and Dele Alli showing that anticipation and awareness are handy qualities to possess – especially when the opposition don’t seem to have any – and he finished from close range to open the scoring.

Before the dust had even settled on that, they had a penalty. Yes, Kane made the most of it, and the way he hung out his leg to make even more contact was lamentable, but it was a daft challenge in the area by Gabriel. When you take a swipe at any forward like that, you’re more or less inviting them to go down and 99.99% of the time you’re going to concede a penalty. Ultimately, I would want an Arsenal forward to do what Kane did.

I have to say quite like Cech’s decision to stand still for the penalty, because so many of the ones we’ve conceded this season have been straight down the middle. And while his penalty saving record is not good, I think the focus really ought to be on us not being stupid twats and giving them away, rather than on a goalkeeper who has had to face far too many of them this season.

After that it was pretty much all Sp*rs. We brought on Welbeck for Xhaka, a really odd move I thought, but it made little difference. Bellerin for Gabriel after we switched to a back four made no impact either, and but for Cech and some careless finishing, they might have scored more goals than they did. 2-0 makes it look vaguely, and I use that word very carefully, respectable, but it wasn’t.

It was the most one sided North London derby I can remember for ages. Arsenal were abject, Sp*rs were very, very good, and the difference was clear. There was precision and clarity to the way they played, while our players looked rudderless and simply unable to find any cohesion.

And let’s not pretend this was all down to how well the opposition played yesterday. I’ve given them enough credit, so let’s be brutally honest: this has been an issue for Arsenal for quite some time now. Maybe a couple of seasons at this point, and despite his best efforts on the training ground and in the transfer market, Arsene Wenger seems unable to do anything about it.

It is time now to thank him for those efforts, and give someone else a go. Except here’s the thing: the thought of this football club trying to transition to a new manager is actually terrifying. I’m not saying it shouldn’t be done, of course it should, but I have even less faith in the people at the top to make good decisions than I do in Arsene Wenger right now.

This situation we find ourselves in is not simply down to a formerly great manager losing his way as he comes towards the end of an illustrious career. It’s a big part of it, but the rot goes from top to bottom. The owner does not care. Not one bit. He might make some noises to suggest he does, or we might get another back-channel article from his son in a favourite newspaper about how a former legend is on the agenda, but I would like nothing more than for Stan and Josh Kroekne to sell up, fuck off and never come back.

I know it’s nigh on impossible, and the idea of Arsenal being owned and run by people who care about what happens to the club is practically a pipe dream, but they are presiding over a steady and seemingly inexorable deterioration of Arsenal Football Club. Kroenke is a big, big problem, and if you want to be angry with the manager that’s fine and perfectly understandable, but save some ire for him too.

And what of our intrepid Chief Executive, Ivan Gazidis? He broke his silence the other day, but it was only to talk about how excited he was that we’d be playing RP Leipzig in the Emirates Cup in July. Not a word, not a single word about the manager and his future. Not a word about the future of the football club, the plans we have, no holding anybody or anything to account, and his nonsensical ‘catalyst of change’ shite can go into the same fucking bin his ‘We can compete with Bayern Munich’ bullshit lives in now.

If you don’t think this insipid, cowardly board are having any impact on what’s happening on the pitch, that’s ok, but I happen to think there’s a direct correlation between those people and the fact that despite more money and greater resources we have become less competitive. People speak about the players being in a comfort zone, well so too is the manager because he knows he’s got nothing to worry about from Gazidis, while Kroenke is so basically clueless as to be not worth considering.

These men inherited a cash cow, a shiny new stadium, and they think that’s an achievement to be proud of. The reality is fans take pride in what their team does on the pitch, not how well the balance sheets look or how many washing machine partners we have. They can all fuck off with the Kroenkes as well, useless twats.

So let’s get a new manager, shake things up, rejig the coaching staff, move on some of these players who represent the worst of this comfort zone era, but if we’re left with those same people up above then I genuinely fear that we’re in for some turbulent times over the next few years.

In short, the skies over Arseblog Towers this morning are grey. I can usually see a glimpse of blue skies somewhere, something that makes you think we could be all right, that this malaise is just temporary, but not today.

I know we have a cup final, and I’m delighted about that of course, but this is a team – sorry, side – that is falling apart before our eyes. Just six wins from the last sixteen games (two of them against non-league outfits), 25 goals scored but 29 goals conceded, there’s a formation shambles, players who look like they don’t care and even after a rock-bottom moment they still couldn’t get it together to make a derby against the old enemy remotely competitive.

I am sorry to be so down this morning, but you couldn’t have watched that yesterday and not been slightly envious of what you saw on the pitch from Sp*rs. And that’s a pretty grotty feeling if you’re an Arsenal fan.

That this football club still seems more inclined to continue with more of the same than make the changes everyone and his dog knows we need to make just compounds that. This isn’t something that can be fixed with a war-chest, although I eagerly await those stories leaking out this week as they desperately try to shift the narrative, because frankly that’s the only thing they seem willing or able to change.

If yesterday didn’t hammer home to them that we need a lot more than that, then I really fear for what lies ahead.

James and I will have an Arsecast Extra for you later this afternoon, so if you have questions or topics for discussion, please send to @gunnerblog and @arseblog with the hashtag #arsecastextra. We should have it available for you late afternoon.