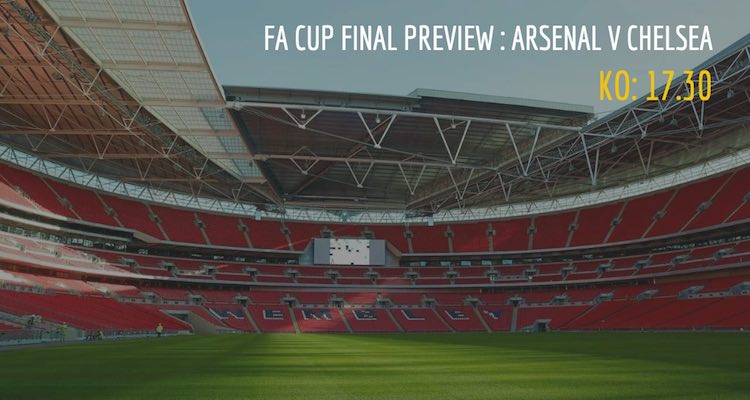 Morning everyone, it’s FA Cup final day. Our third final in four years but that takes nothing away from the occasion. It’s always a special day and today is no different, although perhaps there is a slight change from 2014 and 2015 when we were overwhelming favourites to beat Hull City and Aston Villa.

Today, it’s Chelsea and despite what Antonio Conte might say they’re a stronger side, having won the league, and they also have the benefit of not being shorn of most of their centre-halves and their first choice goalkeeper.

Yesterday, news emerged that David Ospina was going to start today, and my first thought was that Arsene Wenger had done another cup final madness. You’ll remember that in 2014 he picked Lukasz Fabianski when Wojciech Szczesny had been the first choice all season, and the following year he demoted the Pole to cup keeper after his Southampton shambles in the league.

However, some reports say that Petr Cech picked up an injury in training yesterday and it’s that which rules him out, not Arsene Wenger making a crazy decision. Others insist Cech is fit, so I don’t know what to think really. If it’s injury, there’s obviously no other option. If he’s opted to play Ospina over a player who has been in brilliant form over the last few weeks then I don’t think there’s any justification for it all.

Especially not as we’ve got all those other defensive issues to deal with. Laurent Koscielny is out, Gabriel is out, Mustafi is more than likely out although a final decision (hah!) will be made pre-game, and to deny ourselves the experience and quality of Cech to play a keeper who is going to leave the club this summer makes no sense and decreases our chances of success. The bench today will be telling.

Elsewhere there’s a decision to make over who starts up front. I’d go for Danny Welbeck, keeping Olivier Giroud – a man who has shown all season he’s capable of contributing all season – on the bench. To have that effectiveness in reserve would be very handy, although the Frenchman did start the semi-final and it was Welbeck’s introduction that created some Sanogo-esque chaos.

Whether that’s in Wenger’s mind remains to be seen, but if he’s playing Ospina ahead of a fit Cech, I wouldn’t be shocked to see Sanogo himself up top today. Of course, I’m exaggerating, but both Welbeck and Giroud are capable players on their day. Let’s just hope today is one of those days.

Centre-half issues, and doubts over Kieran Gibbs, will have an impact on the potential involvement of Alex Oxlade-Chamberlain, recovered from his hamstring strain, so it’s hard to predict today’s line-up with any real certainty. I’d have no issue with the Ox playing on the left ahead of Gibbs, but if it’s a straight choice between him and Hector Bellerin the Spaniard would get my nod.

We have beaten Chelsea already this season, and that should be in the forefront of our minds, not the pummeling we took at Stamford Bridge. It’s a final, anything can happen, so fingers crossed we’re the ones who can make it so today.

I’m sitting here this morning with my stomach slightly churning (although that may be something to do with beer and the significant amount rum, bourbon and Knappogue Castle I had last, and I can’t wait. It’s a day out in the sunshine with friends and the Arsenal, with the chance of silverware at the end. What more can you ask for?

We have the chance to make this season one which is remembered for the right reasons. Ultimately what you look for is a trophy, and today provides us with that opportunity. The players know what it means, the ones who weren’t here last year were brought up to speed, so let’s go out there and do this today.

Now, what did she wear?

If for some reason you can see the game later on – and I’ve heard horror stories of people having to go to weddings or other hugely inconvenient and selfish family events – we’ll have full live blog coverage for you. Check back later for a post with all the details, or simply bookmark the default live blog page and updates will begin automatically.

Now, preparations begin. Wagons roll. See you some of there, more of you afterwards, and I will be channeling the spirit of Brady with his socks around his ankles pushing the ball out to Rix who crosses for SUNDERLAAAAAAAAAAAND …