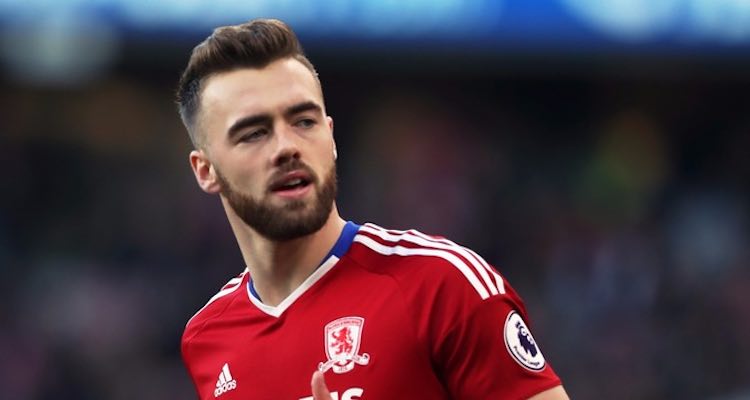 Chelsea’s win last night puts them within touching distance of the title, but also sees Boro relegated. Calum Chambers has been on loan there this season, and obviously that will be a disappointment for him, but I do wonder if it will be a season which has done him some good in general.

He’s played fairly regularly and performed well by all accounts, so from that point of view it’ll have been quite the learning experience. Perhaps not as positive a season as he would have hoped, nobody wants to be part of a relegation, but there’s something to be said for learning what happens at the bottom at the table as well as the top.

And it’s worth pointing out Boro’s big problem hasn’t been the defensive side of their team, but that they cannot score enough goals. Their boss Steve Agnew said:

He’s been excellent. He’s a top defender, but not only has he got great defensive qualities, he has a high level of technical ability.

And previous manager Aitor Karanka was equally effusive about the 22 year old before he got sacked. If Arsenal continue using three at the back, it might just open the door for Chambers to come back and stake a claim for a place. As it stands the current collection of central defenders is as deep as any we’ve had in recent time, but there’s no doubt there are question marks over some of the players.

Where, for example, is Per Mertesacker? He regularly features in the training pictures, and he was on the bench as far back as January, but has yet to make a single appearance this season. He suffered a knee injury in pre-season and was obviously hampered by that, but it feels as if the manager is reluctant to use him at this point. Having not found room for him before now, it would be difficult to throw him in for his first appearance when there’s no margin for error, but it’s still a bit of an odd one.

Gabriel has had some good moments this season, especially in that semi-final at Wembley, he always feels like a player with a mistake in him somewhere. We saw that at White Hart Lane when he conceded the penalty. Now, it would also be fair to say that defeat on the day was hardly down to that error alone. Arsenal were collectively dreadful on the day – bar Petr Cech – and yet it’s hard to maintain a great deal of confidence in the Brazilian based on everything we’ve seen so far.

A bit like Granit Xhaka, I think it’s hard to properly judge Shkodran Mustafi’s first season, simply because of the team’s malaise taking hold and affecting individuals. He’s still relatively young in the life of a centre-half and he can certainly improve, but I don’t think he was ever the panacea to our defensive issues that people said in the first half of the season. His decision making needs to get better, although I do feel playing part of a back three might really suit him.

Laurent Koscielny’s experience is vital, and without wanting to heap pressure on him, the early signs from Rob Holding look very promising. He made a couple of errors against Man Utd on Sunday, but young defenders do that – it’s how quickly he learns from them that will tell us more. Overall his contribution has been overwhelmingly positive and he seems to have a good head on his shoulders.

If we do sign a left-sided defender, like Sead Kolasinac for example, I’d be inclined to say goodbye to Kieran Gibbs whose career has stagnated over the last couple of seasons, and keep hold of Nacho Monreal whose versatility and consistency are valuable assets. He can slot in at left-back, left wing-back and as part of a back three, and I don’t think his Arsenal goose is cooked yet by any means.

So, if Chambers came back this summer and was ready to compete, I think he’s got a chance. It sounds like we have a load of options, and we definitely have the numbers, but when you play three at the back you need a bit more in reserve than if you’re just playing a couple of centre-halves.

You don’t have to go back too far to remember a season when we had just three established central defenders: Koscielny, Mertesacker, and Thomas Vermaelen. Monreal was used as en emergency centre-half at times, but you can’t get away with that if you need to play three there week in, week out.

It’s worth remembering that when he first broke into the team there was genuine excitement about his potential, and we obviously saw enough in him three years ago to pay Southampton £16m. The path to first team football is not always easy and not always linear, sometimes you have to take a small step backwards etc, and if we are going to continue with this formation then we’ll need numbers.

Of course, there are those who will say that we could go out and buy a centre-half of some repute, which is very true, and I’d have no issue with that at all. However, if you look at the squad and some of the names who might go this summer we might need to pay a bit of attention to the home-grown player requirements. Anyway, we’ll see what happens, but if the purpose of a loan spell is to see a young player do well and develop, Chambers has ticked those boxes better than many others in recent times.

He also has a really nice beard.

In other news, Granit Xhaka talks about how he doesn’t feel hard done by from officials this season (I think he should), while a new columnist over on Arseblog News backs up Phil Neville’s assertion that players hugging in the tunnel before the game is wrong.

The manager meets the press this morning ahead of tomorrow’s game against Southampton. We’ll have all the team news etc on Arseblog News. Will Xhaka make it? I hope so.

Finally, get your ears around this week’s Arsecast Extra in which James and I discuss the 2-0 win over United, thumping headers, beating Mourinho, the evil Maltesers conspiracy and lots more. Listen below, and thanks to everyone who got tickets for the live show in cup final week that is now sold out. See you there!