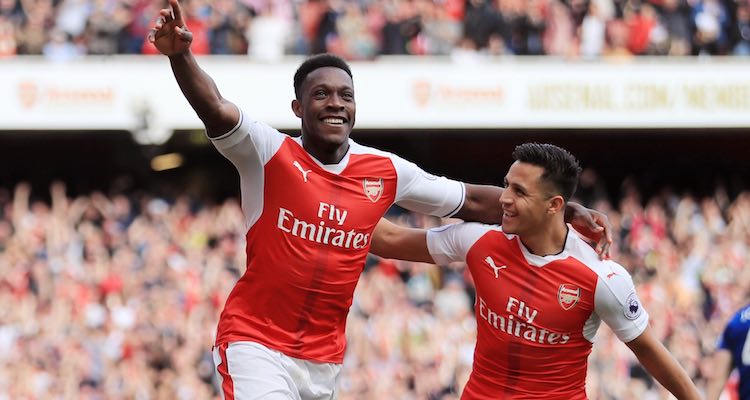 Well, whaddya know? A win against a team in the top six, and a win for Arsene Wenger over Jose Mourinho in the Premier League for the first time. Obviously the manager was keen to downplay that afterwards, but I’m sure in a season which has been difficult, to say the least, there’ll have been some quiet satisfaction at putting that slight hoodoo to rest.

He made a couple of changes to the team that lost last weekend, bringing in Rob Holding for Gabriel while Danny Welbeck started up front ahead of Olivier Giroud. There was plenty going on in the opening stages of the game too, with Rooney and Martial threatening for United, while Alexis and Aaron Ramsey had shots on goal for us.

Then the game settled into a pattern which saw Arsenal have lots of the ball, and United parked lots of the bus, sitting deep and defending in numbers. They might have gone ahead when a mistake by Holding and some strange apathy from Koscielny saw Rooney with just Cech to beat, but the Arsenal keeper stood up well and made a good save from close range.

The rest of the half played out without much happening, the the first 10 minutes of the second half were remarkable in that absolutely nothing happened. It was as if the players were deliberately trying to do as much nothing as possible, and United in particular had no real ambition (even with all the changes, that is not the philosophy we’re used to from that club).

Eventually Granit Xhaka figured something had to give, so took the ball from a throw in and had a pop from 30 yards. His shot cannoned off the back of Ander Herrera, who had bravely turned it in the direction of the ball, and looped high up in the air before dropping down in under the crossbar. Not the prettiest goal you’ll ever see, but one made particularly enjoyable because of who it deflected off.

If, like me, you were wondering what the screaming noises were at times yesterday, it was because of him and the Arsenal fans were taking the piss:

Herrera let out an enormous scream next to the east stand when he pretended to hurt his head.

So that, on top of the fact he’s been Snidey McSnidealot all season long, was very enjoyable. Made more so by the fact we got a second just a couple of minutes later. Holding won the ball well for us down the right and fed Oxlade-Chamberlain. He whipped in a delicious cross and if there’s anything better than a thumping header, it’s a thumping header that goes in off the underside of the crossbar, so thank you Danny Welbeck for the double fun of that goal.

I also liked the fact he celebrated. None of this not celebrating against your old club nonsense. As he said afterwards:

When you score you’ve got to be happy, so it’s only normal.

Quite right. That’s his third goal against United since joining us from them, and while Arsene Wenger said afterwards that record, and the fact he seems to give that bit extra when facing his old side, played a part in his selection, he really didn’t have much choice after last weekend’s North London derby. He can be a frustrating player, Welbeck, but hopefully that goal can give him the shot in the arm he needs. A run of games at centre-forward would help too, so let’s see.

United brought on Lindgard and Rashford for Screamy and Mkhitaryan, and we rather worryingly lost Granit Xhaka with what looked like a calf problem. I hope it’s not too serious because I think we saw yesterday the player we all want him to be. I think the criticism of him this season has been OTT – especially from people who haven’t watched him week in, week out and base their dismissals of his quality on highlights – but it’s also true that, like many others, he hasn’t found any genuine consistency.

In his 75 minutes though he got the opening goal, completed 70/74 passes (95%), spread the ball beautifully at times, and along with Ramsey, looked more influential in the centre of midfield than he has for a while. Perhaps it was down to the opposition, who only really wanted to play after going 2-0 down (and even then they were still cautious), but it would be a shame if he were sidelined because of injury. Especially with so little of the season left.

United never looked like getting back into it, Rooney was spraying shots and crosses high and wide, but that bring about this hilarious attempt to block a shot by substitute Francis Coquelin. I’m not sure I’d have found it so funny if the ball had struck him on the arm in our box, but it didn’t, so it’s still amusing to me. You may insert your own Coq-Block joke here.

Afterwards, Arsene Wenger spoke about the formation and the fact that three at the back has helped bring four wins from our last five games:

Yes. If you look overall at the goals we have conceded since we have played this system, it’s quite positive overall. We looked solid today and I must say it’s encouraging and it’s worth continuing to work on it, to improve it as well. The players communicate well, and connect well. We look solid.”

I’m still not necessarily convinced he’s convinced by it. When asked about it on Sky afterwards he didn’t seem too keen to laud the use of the formation, almost as if he felt the team won in spite of it. Of course it has been only five games, and there’s a lot of work to do with it, but if you’re looking for positives the fact that we’ve beaten both Man City and Man Utd with it, in high pressure games, certainly gives you a big tick in the ‘Let’s keep with it for now’ column.

So, a much needed win, and one that we can certainly enjoy in the very short-term but for the team it’s back down to work straight away. We play Southampton away on Wednesday, a difficult place to go, and for this side to really convince people they’re going in the right direction, they have to show they can deal with a difficult schedule like this. Beating United is great, but we can’t afford to stumble in the next one.

It’s going to be a very testing week too. We have to visit Stoke on Saturday evening as well, so there’s a lot to cope with. For now though, we should take the time to enjoy yesterday’s win.

James and I will be here later on this morning with an Arsecast Extra, so please join us for that. If you have any questions or topics for discussion, send to @gunnerblog and @arseblog on Twitter with the hashtag #arsecastextra.

The podcast should be up before lunchtime, until then have a good one.