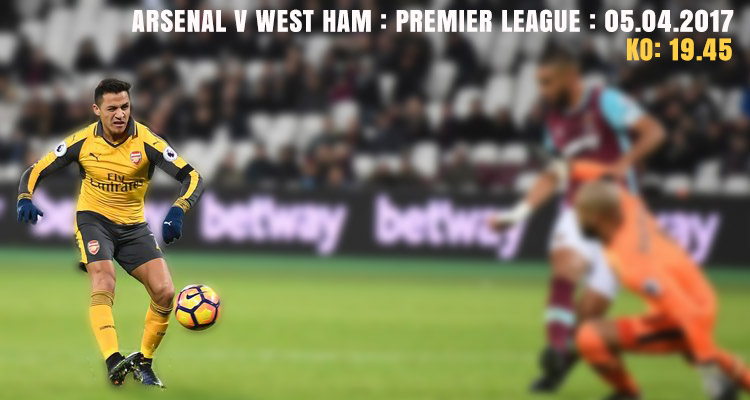 Premier League action tonight as we take on West Ham United at the Emirates.

The previous game against them this season brought about one of our most convincing wins of the season when an Alexis Sanchez hat-trick inspired us to a 5-1 win at the Free Stadium of London, and while it would be a surprise to see us do anything similar tonight, this is a game we have to win.

As I said yesterday, the Hammers form is even worse than ours at the moment, so we have two teams low on confidence who will be striving to take three badly needed points. For Arsenal it’s a chance to get back on track after steadying the ship somewhat against Man City on Sunday, but there are some team issues for the manager to sort out.

It appears that David Ospina has picked up an injury, and with Petr Cech sidelined that means a chance for third choice Emi Martinez who is, at least, a goalkeeper sized goalkeeper. An Achilles injury to Laurent Koscielny – one that Arsene Wenger admitted might well be serious – will see him miss out, so the choices to partner Shkodran Mustafi are Gabriel, Per Mertesacker (playing his first game of the season), or Rob Holding.

I suspect it’s going to be the Brazilian, but whoever it is will have to be aware of the threat of Andy Carroll and, crucially,  be able to do something about it, as it’d be a surprise if West Ham didn’t focus on our defensive weakness from crosses and set-pieces.

Oxlade-Chamberlain and Ramsey are back in the squad, while there’s a doubt over Coquelin. Mohamed Elneny will probably sit on the bench, and up front will he change again after the trio + Ozil that he selected against Man City really failed to click? It feels like a Giroud game to me, in that this is the sort of fixture the manager selects him for.

I really have no idea what we’ll see from Arsenal tonight. I don’t think there’s a single player in form, collectively we’re a long way from where we need to be, and while some of it is definitely linked to confidence and rhythm, it’s hard to look beyond the fact the engine room of our team – the midfield – is so dysfunctional.

It’s been like that practically all season and while I know we’ve had to deal with injuries and suspension and other absences, to be in April and not have found any genuine solution is a pretty poor indictment of our set-up.

Still, all we can do is hope they click in some way, with the manager refusing to rule out a top four finish with ten games to go:

I think it’s perfectly possible. For 20 years I’ve done it and it’s looked like it’s nothing. Suddenly it becomes important and I’m pleased to realise that people realise that it’s not as easy as it looks. If you listen to Guardiola he said the other day to achieve the top four is a trophy because it’s so difficult.

So of course we have a difficult task in front of us but I’m happy that people realise that it’s not as easy as it has looked.

Somewhat disingenuous there from Arsene Wenger, who has said time and again that a top four finish is the ‘minimum’ required from a season. And having lived through seasons where it looked as if we might not even achieve that, Arsenal fans don’t need to be told they thought it was easy.

I’ve never been one of those who took umbrage at the top four like a trophy thing, because I understood what he meant by it. Of course it’s not a real trophy, it’s pretty much a soundbite, but in real terms – Champions League qualification + the money you got for that – it was important for the club.

Now though, you can’t, when it looks like it might not happen, start holding it up as if it’s something that has been taken for granted or almost use it as a ‘you don’t know what you’ve got till its gone’ kinda thing.

Obviously finishing as high up the table as we can is the goal between now and the final game of the season, but let’s not make out like it’s simply down to it being difficult or the competition for a top four place being stronger than ever. It’s part of it, no question, but most of it is down to us losing games and playing like twats since the end of January. That’s on us, nobody else.

Then you read about how, after Koscielny went off against Man City on Sunday, Arsenal didn’t have a captain for the second half. Not one that the manager was aware of anyway. Even as someone who thinks the importance of the captaincy is often overstated, when you see something like this happen it makes you wonder if that kind of oversight is a consequence of everything else that’s going on. It feels a bit shambolic, really.

Once more there was no clarity over the future, a ‘you will know soon’ is the best anyone got out of Arsene Wenger at his press conference yesterday, but what does ‘soon’ mean? How deep is a hole? How long is a piece of string? Round and round and round we go, where it stops nobody knows.  And nobody can be bothered to tell the fans, at least.

Anyway, let’s hope that the men on the pitch tonight can perform to something like the level we know they’re capable of, and taking three points from the first of two London derbies inside five days is going to be crucial.

As ever we’ll have a live blog for you later on, join us for that, and all the post-match news, reports, stats, player ratings and the rest over on Arseblog News.

West Ham preview: A bit more of the same?