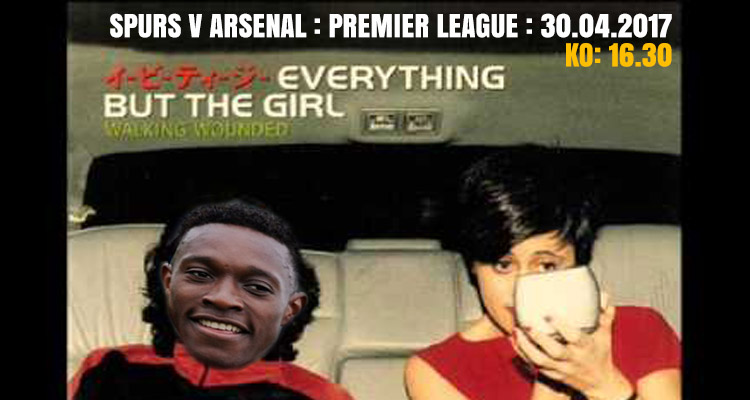 There’s only one thing to talk about this morning and that’s the North London derby. It’s a high stakes game for both sides, Sp*rs looking to keep their title challenge going and Arsenal looking for a win which might help us to the top four.

And let’s be honest here, the importance of the game from their point of view means we can take a bit more from this game than just three points. Putting a dent in their hopes of a first title in my lifetime would be an added bonus, and we can’t pretend that doesn’t matter.

The first derby of the season, the 1-1 draw at the Emirates in November, was a weirdly tepid game. There was a little bit of niggle at one point, but it was played in an odd atmosphere. Not the red hot fire you would expect when these two sides meet. It was as if both sides were unwilling to lose rather than out to win. You wonder if the pressure might play a part today, although I think the fact that we’re at the business end of the season will provide the urgency this fixture needs.

In terms of team news, it looks as if Laurent Koscielny was in full training yesterday, so you’d expect him to start. I’d be happy to see Rob Holding come back into the team as part of the back three, and with Shkodran Mustafi still absent through injury it’ll be Gabriel on the other side.

It’ll surely be Monreal as the left wing-back and the manager has a decision to make about who plays on the right. Will Alex Oxlade-Chamberlain come back in for Hector Bellerin? I think he might, you know, with the manager looking for him to do what he did at Wembley against Man City.

I can’t see beyond Ramsey and Xhaka in midfield, with Alexis and Ozil ahead of them, so the big decision is who plays up front. It’s between Olivier Giroud and Danny Welbeck, and I’d much prefer to see the latter than the former. Not simply because the Frenchman is a decent option from the bench, but the movement of Welbeck will give their defence a bit more to think about.

Giroud is pretty static, we know how he’ll play, we know how Arsenal play with him in the side, and while it’d be wrong to say it’s easy to deal with, it’s a bit more black and white than it would be with a player who can pull defenders out of position and run at them with pace.

If I had to name an 80s band after Welbeck, it’d Everthing but the Goal. It was his introduction that really stirred us as an attacking force against Man City in the semi-final, and while he should have scored and been more aware of others in a couple of attacks, he made a big contribution to changing the balance of the game, and it was his run that won us the free kick from which we scored the winner. If he could add a finish or two today, rather than Missing, all the better.

Other options like Walcott and Lucas Perez, back in training now too, give us plenty from the bench if we need it. And we might, because this is a good Sp*rs side who have plenty of goals in them.

Ahead of the game, Arsene Wenger says:

I expect an open match, a committed match, a match with high pace. There could be goals because both teams play positive football, try to go forward and play in an offensive way. Normally that finishes with goals if you look at the quality of players on both sides.

With Chelsea going to Everton ahead of this one, their lead could be seven points before kick-off. Will they be able to cope with that pressure if that’s the case? This is a team who have, down the years, found it difficult to deal with situations when everything’s on the line, and I wouldn’t be unhappy to see that self-destructive streak manifest itself again.

Of course we have that running deep within ourselves as well, so it’s not as if we’re perfect in that regard. And I think it will be down to which team handles the occasion better. There’s a lot to play for today, it’s the last ever derby at this White Hart Lane – a ground where only Arsenal have won the title in living memory – and all that coupled with the intense rivalry of this game provides all the ingredients for a classic encounter.

I kid, but it could just as easily go like that. Ultimately we have to just do what we need to do, which is take three points to keep the chase for the top four going. It’s another ‘cup final’, and it’s against a team which have so much to play for themselves. The nerves are jangling already.

We will have a live blog for you later on, check back for a post with all the info or bookmark our default live blog page. There’ll be all the post-game stuff, player ratings, by the numbers etc, over on Arseblog News too, so for now it’s breakfast, dog walking, then some nail-biting ahead of the real nail-biting.