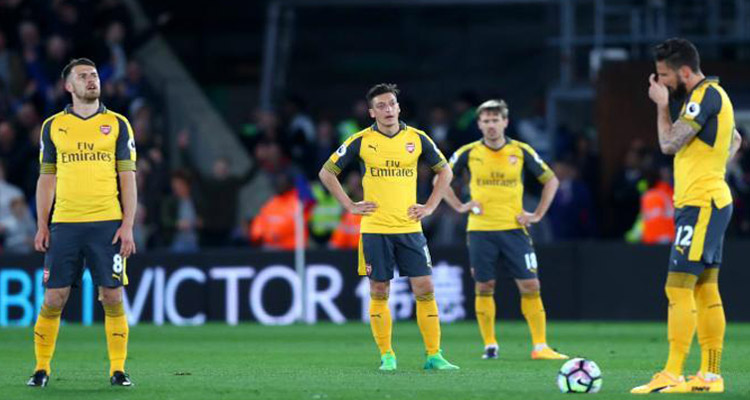 Arsenal are a shambles. From top to bottom, front to back, on the pitch, off the pitch, it’s a shambles and last night should be the final straw.

The draw with Man City and a win over an awful West Ham side were, in isolation, reasonable results but in the context of the last few months they were like a period of wellness a terminal patient can enjoy before they go downhill again. Last night at Selhurst Park was this club lapsing back into sickness, the machines are bleeping and there’s only one way this is going to go.

Fans, already fed up with the manager and the board, have turned on the players and when you hear them sing ‘You’re not fit to wear the shirt’ after not giving their own player the ball back after it went into the stands, something is irreparably and fundamentally broken.

It can’t be fixed by this manager, no matter how hard he tries. It’s over, and the longer it goes on without somebody doing something about it, the more ugly and damaging it’s going to get. The team bus being surrounded by furious fans as it left for the journey back home; players being booed because there’s really no other way for people to express the depth of their anger and feeling; and the consequences of the Arsene Wenger situation being allowed to fester without any leadership or clarity were obvious on the pitch once more.

It’s genuinely horrible to see it: players who simply aren’t doing it for a manager who can’t do it anymore for a board who don’t seem to care who does what. Arsene refusing to talk about himself because it would be ‘inconvenient’; Chief Executive Ivan Gazidis watching on from the stands trying to decide which newspaper he might leak some stuff to to make himself look good; and nothing at all from our esteemed majority shareholder who now has another mediocre sports franchise to add to his collection of mediocre sports franchises. Congrats to you, Stan Kroenke, you’ve done it again.

The Arsenal captain for the night, Theo Walcott, performed his media duties and said that Crystal Palace wanted it more, that the players knew that from the first whistle. They knew that but couldn’t, or wouldn’t, do anything about it. What does that tell you about the way this group of players thinks, or how they respond to their instructions?

Palace started the night just above the relegation zone and looked far more like a team aiming for the top four than we did. We saw the results last weekend, we saw all the teams around us win and knew what we had to do, but you could barely even say that some of them went through the motions, let alone coming close to putting in the kind of effort required to win a match like this.

Sterile football once more. 72% possession without a shot on target in the second half. Physically beaten. About as much cutting edge as a butter knife. A group of players who have the talent and ability to do more but who look beaten before they step out onto the pitch. A goal goes in and it’s a knife in the heart. Not a butter knife, a real proper stabby knife. No reaction, no leadership out there, no togetherness, just a simple acceptance that this is the way it is and there’s nothing they can do to change it.

Overloaded once more when they opened the scoring; abject defending for the second; and a dive for the penalty but all that did was make the defeat 3-0 instead of 2-0 because nothing was changing anyway. Conceding goals away from home because that’s what we do now. Concede lots and lots of goals.

The issue of a new contract for the manager should not even be an issue. There is no justification for giving him a new deal. You cannot look at what’s happening on the pitch and the reaction to it from fans and think that this is a situation that can be salvaged. No amount of PR, ‘war chest’ stories, stories about returning Invincibles, or anything else will make any difference at this point.

I don’t doubt he works as hard as ever. People tell you he does more, the old alchemist poring over his recipes to try and recreate the magic that made him great, but nothing works. The ingredients are missing and no matter how many more hours he puts in, he’ll never find it again.

There’s a strong case to be made that a decision should be made about Arsene now. Today. Whether that’s a parting of the ways now, or an announcement that it’s over at the end of the season, I don’t think that’s an unreasonable position. It’s certainly one that would be almost expected of a normal football club, but I don’t think we’re normal.

If it’s the first option I have worries we have nobody who can step into that caretaker role. If they’re not listening to Arsene Wenger, will they listen to Steve Bould? But concerns over the second seem redundant.

‘What if he announces and the players give up?’ – it’s a bit late for that, they already have. Accused on Sky last night of ‘chucking it’ the way Chelsea players did when they lost faith in Mourinho. At least some clarity might rally them a little, remind them that they’re not exempt in all this because they’ve let the club down as much as the board or the manager’s inability to shape them into more than the sum of their parts.

It might shame them into playing, keen not to see a man they say they all respect go out in further ignominy. Determined to give him a send-off, perhaps with a trophy because there’s still the FA Cup but right now I wouldn’t even want to playing Lincoln let alone Man City followed by Chelsea or Sp*rs. Maybe they’ll buck up their ideas knowing a new man is going to come in and their safety net is gone – or maybe some of them would relish that and act accordingly.

What cannot be allowed to be happen is another week of obfuscation. Another press conference in which no clarity is offered. Another series of unanswered questions, wry smiles, and predictable headlines. Another week in which this insipid, ineffective board contribute to the ill-feeling, anger, and disenchantment that is, in some cases, completely damaging the relationship people have with the football club they love. Or once loved.

It can’t go on like this on any more, because losing 3-0 to Crystal Palace is a consequence of it. As was losing to West Brom, and Chelsea and Liverpool and Munich etc. As is being sixth in the table. As are the seven defeats from our last twelve games. If they continue to stay silent, to do nothing, to act as if they’re somehow powerless to do anything about it, then it’s nothing less than a total dereliction of duty.

If they can’t understand how damaging this is for for the football club, or if they do understand it and refuse to address it properly, then our problems are even deeper than we think. We’re the old boxer being pummelled around the ring, and they’re the trainer refusing to throw in the towel – the damage we’re suffering is now on them.

Leaving a once great manager to be hounded out is an act of abject cowardice, but they ought to remember that once the human shield that is Arsene Wenger is gone they have nothing left to hide behind. It’s on them and what they do, and while people find it very hard to look beyond their frustration with the manager now, in time that will pass. In time we’ll more easily recall all the great things he did for this club and what he gave us as fans, and then we’ll ask what this board ever did and there’ll be no misty-eyed reminiscing at all because when push came to shove they hid – like kids behind the sofa watching a scary movie.

We don’t even have words to judge them by because they haven’t deigned to provide us with any. Bar Sir Chips perfunctory statement a few weeks ago, they have said nothing, and that is how we should judge them. On what they do, not what they say or refuse to say, because this silence has been deliberate, make no mistake about it.

Arsenal are a shambles, and it’s time somebody took some responsibility for making it better.

James and I will be here this morning recording an Arsecast Extra. If you have any questions or topics for discussion, send to @gunnerblog and @arseblog with the hashtag #arsecastextra.

We’ll have that up before lunch. Until then.