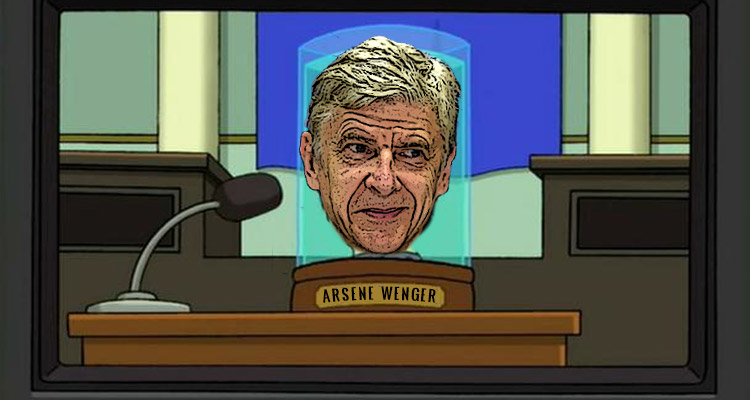 Morning, a quick early one for you, as I am on the move today.

Champions League semi-finalists are all completed. There was no miracle comeback for Barcelona, they used up their juice and refereeing decisions against PSG in the last round. Juventus keeping consecutive clean sheets against one of the most free-scoring teams in the world is pretty impressive too.

Someone should check if they have a relatively young, in-demand manager with a track record of winning trophies and that. We could look at him covetously and then go ‘awwww’ when he turns up to manage a newly minted Everton when Alisher Usmanov sells up his Arsenal shares, goes there, and pumps hundreds of millions into the place.

“Look, err …”, says the Futurama head of Arsene Wenger, currently on a rolling day to day contract, as he refuses to answer any questions about his long-term future. Assistant manager Josh Kroenke gives him a dig in the ribs but then realises he doesn’t have ribs anymore so just gives up.

In the other game, Monaco beat Dortmund with the exciting Kylian Mbappe becoming the first player to score in his first four Champions League knockout games. What a prospect he looks, and you can understand exactly why it was we had our eye on him and tried to bring him to Arsenal before he made his breakthrough.

Now, he’s the hottest young striking talent in Europe and if you had your pick of clubs, I’m not sure Arsenal would be top of the list right now. Even if you were predisposed to us, a childhood fan or something, there’s so much going on at the moment that you’d probably take another option. A club more settled, less chaotic, where perhaps the owners have shown they’re interested in winning things etc.

It’s been pretty quiet since the 2-1 win over Boro, which I think is not a bad thing. Sometimes there’s a tendency to milk a win for ‘content’, but this time the fact there hasn’t been that at least displays a little awareness of the current situation. Anyway, they have an FA Cup semi-final to get their teeth into this weekend, so that’ll be something.

Yesterday, the club confirmed the Jack Wilshere injury, the midfielder suffering a crack to his fibula which has ended his season. Apparently it has yet to be decided if he’ll return to Arsenal for his treatment/rehab, but I guess in the early stages there’s not much he can do but rest, and by the time that period is over his loan spell with Bournemouth will be pretty much complete so it’s likely to fall under the auspices of our medical/physio staff.

As I said yesterday it’s a real shame for him on a personal level. I don’t know if he really did enough at Bournemouth to convince anyone that he’s the long-term answer to our midfield problems, but I would have liked to see him get through a season without serious injury, so question marks will have to be raised about his future now. Let’s see, maybe this one might be a quick healer.

From Italy come reports that Wojciech Szczesny is not wanted by Roma next season, and that Napoli might be interested in signing him. Back in January I half-jokingly set out my 10 point plan as to why he should come back to Arsenal next season and as time goes on I’m now quarter-joking, or one-sixteenth joking, or even not joking at all, because I think this is an area we need to do something about.

Tim from @7amkickoff had some interesting numbers on Petr Cech during the week, and once more David Ospina is being linked with a move to Turkey/anywhere but here. I’d be inclined to try and harness the fact Szczesny has got two more seasons of top flight football under his belt, currently with the most clean sheets in Italy, and unless there’s an amazing option available on the market, look to him as a potential competitor for the position next season.

Mind you, I do think one of the key parts of this catalyst for change (haha etc) might be took look at why exactly it is ALL our goalkeepers develop similar flaws. Could it be the coaching, perhaps? Would a new goalkeeping coach be a worthy signing this summer?

Yes Brian, I think it would.

Thanks Trevor. Now over to Doug for the weather.

Right, I’m out of here. There’s a press conference this morning which I’ll cover when possible over on Arseblog News. More from me tomorrow.