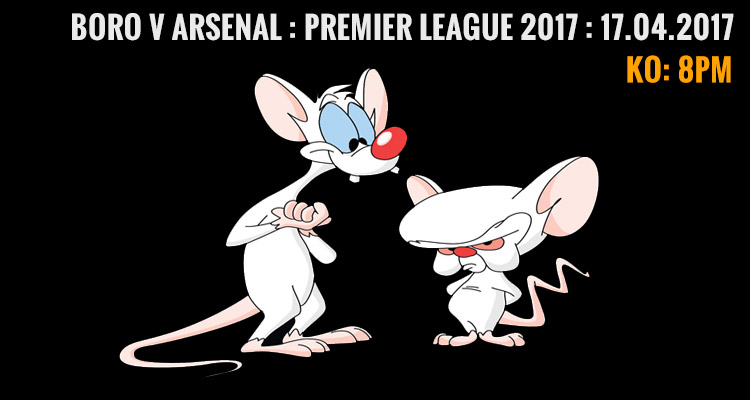 Morning, hope you all had a Happy Easter, spoiled as it was by Manchester United beating Chelsea. And on reflection, does that in itself not suggest that something is spoiled? Not that I ever want Mourinho to be happy, but the close proximity of that lot – you know who – to the top of the table is unacceptable in the extreme and Chelsea’s inability to extend the lead to 7 points was annoying.

Oh well, looks like it’s on us to spoil their fun when we visit White Hart Lane in a couple of weeks.

In the meantime though, we have to figure out how to beat Middlesbrough tonight. Not ordinarily a game you’d have too many worries over, but the way we’re playing right now literally anything could happen.

They can’t score, we can’t defend, and as James said on the Arsecast Extra last week, it’s like the stoppable force against the movable object. Will Arsene Wenger make any changes to the team that got beaten by Crystal Palace? He should, but I don’t know what will work at this point.

Maybe a goalkeeper is fit and can replace Emi Martinez but I’m not particularly worried about that either way. Could we see Per Mertesacker get his first game of the season to try and add some calm and organisation to the back four? Olivier Giroud up front to replace Welbeck? Aaron Ramsey back in midfield because that’s just what happens?

I have no idea really, and I have no idea what we’ll do in terms of our game-plan or style. My suspicion is, in the same way that Pinky and the Brain could only ever do one thing every night – try and take over the world – we’ll do the same thing we do every game and just hope that it works this time.

Because when it does work it’s generally grand and enough to win, but when it doesn’t we’re a bit banjaxed because there isn’t necessarily an alternative plan or somebody to implement it. If that all sounds a bit weary, forgive me, but it’s just very difficult to see what we’re up to at the moment. It’s like a kind chaotic improv.

I also like the fact that the official site hasn’t even bothered to do their regular preview of the game – not one I can find anyway. It kind of sums things up. Anyway, we’ll see what happens, as the manager says the team has to do what it can to bring the fans back together:

The fans want to be behind the team and the way we respond on the football pitch will decide the attitude of the fans. The fans love the club. It’s a good period to be united and not divided. Historically Arsenal has been about that. One of our values is to be together. There’s no better period of the season than to show it now.

He’s also spoken about Hector Bellerin who was the brunt of some displeasure from fans during the Crystal Palace game. And while I understand fans being fed up with the team’s performances and letting the players know it, it’s a bit like going bananas at the call-centre worker when you really need to be getting angry at the supervisors and the management.

The players are there, front and centre, yards away from the fans who have been more or less ignored when their concerns and grievances have been directed at those further up the ladder.

Despite the fact they’ve had every opportunity to respond, and had plenty of platforms from which to do so, they’ve either stayed silent (board, owner, chief executive), given perfunctory statements (chairman), or just refused point blank to provide any clarity at all (manager).

And in relation to what happened at Selhurst Park, was there any acceptance that all this might be affecting the relationships between fans and players? No, simply a breakdown of why the young Spaniard is struggling:

I think it’s unfair because he’s a guy who is genuinely Arsenal and wants to do well. I agree that for a while he was not the Hector Bellerin we had seen at the start of the season. He has not come back to his level since he has been injured.

“Then you get bad habits and you forget that your job first is to defend and win challenges because you protect yourself a little bit. I think now he is trying to focus on again what is important, to defend well. After he can give us the extra bit [going forward] that is important as well.

I’ve said this a number of times on the blog and the Arsecast, but I’m not inclined to make any real judgements about players and their form this season, because almost every single one of them is playing below their potential.

Is it just bad luck that all of our players have had a slump in form at the same time, or could there be a bigger problem? One that transcends individuals and affects the collective? I think we all know that it’s the latter.

Right now we’re a team without cohesion, fluency and rhythm; a team that looks bereft of confidence and ideas; a team that appears to be broken and the spare parts used to try and fix it don’t work; so while it’s true Bellerin hasn’t been at this best, that’s true of pretty much every player in that squad this season.

Right, that’s that. We’ll have all the game stuff later, live blog, match report, player ratings etc, so join us for that and hopefully James and I will have something good to talk about in the Arsecast Extra tomorrow (foreign wifi permitting).

Catch you for the game later on.