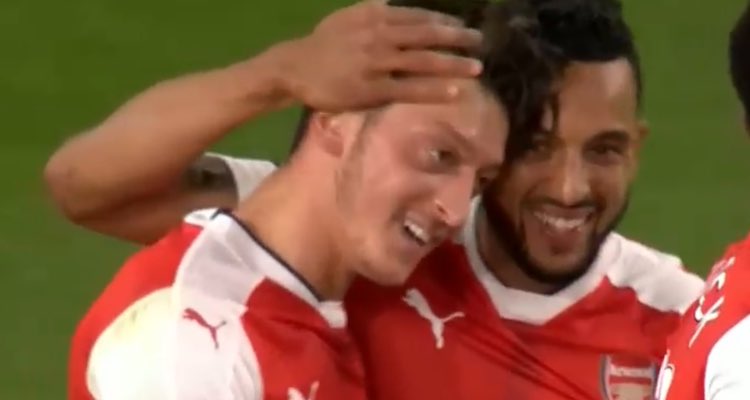 Arsenal provided fans with a delicious, healing can of Pepsi last night, making everything in the world right again by the simple, timeless gesture of winning a football match.

In seriousness though, we won and I liked it, and I wish we would do it more often. Theo Walcott was the captain for the night after we remembered we needed one of those, and he should have been awarded a penalty when he was barged over in the West Ham box midway through the first-half, but Martin Atkinson waved played on because Martin Atkinson.

Danny Welbeck had a chance after a lovely Alexis free kick found him with just the keeper to beat, but he kicked fresh air instead of the ball and the chance went begging. The first period was probably fairly even all things considered, we didn’t make the most of a couple of opportunities, but we didn’t seem to be under any real pressure either.

We began the second half strongly, playing most of the game in their half, and there were promising signs but no breakthrough. That was until the ball came to Mesut Ozil outside the area and his curling shot bounced in front of Darren Randolph then through Darren Randolph. It was a goal that owed more to poor keeping than great finishing, but when you’re in the doldrums the way the German has been, you don’t really care about that. It brought his goal tally for the season to 10, the first time he’s hit double figures in his time at the club.

Given that analysing celebrations is de rigueur, I think it was telling that so many players came to congratulate him, knowing how badly it was needed. It definitely energised him, and a lovely combination between him and Alexis saw Ozil provide the perfect pass for Walcott to side-foot home the second that we really needed. Having conceded almost immediately after scoring against Man City, it was good to see us avoid that and instead get another one to extend the lead. Like winning, we should do this more often too.

Before that Walcott had created an excellent chance for Welbeck who saw his effort saved, before he was replaced by Olivier Giroud. The Frenchman put the icing on the cake late on with a gorgeous curled finish from the far side of the box and I, for one, appreciated his non-celebration. It was the third goal in what was a comfortable win, there’s no need for anything other than to be internally satisfied while projecting an outward image that suggests this goal is a sign you should be playing more.  There were some manly handshakes and a couple of slaps on the back as we went back to finish off what was a good night’s work.

It could have been even more comfortable had the referee awarded two clear penalties on Nacho Monreal. For the first the Spaniard had the temerity to not have had his arm cut off with a chainsaw, the only true way we can really tell if there’s been a foul, while the second – in the dying minutes – saw him simply crumpled by a foul in the area by a bloke already on a yellow card. How on earth could the Atkinson have awarded a penalty and a second yellow for something as hard to spot as a blatantly obvious foul in the box? Monreal really needs to sort himself out.

In the end though, a win which we both needed and fully deserved, and afterwards, Arsene Wenger said:

At the end of the day it was a convincing win with good individual performances from everybody from the goalkeeper to the striker. So it’s a good result tonight and a relief as well because we have gone through a bad period.

With Man City losing and Liverpool dropping points as well, it was a good night for us in terms of the chase for the top four. When I mentioned this on Twitter last night some people questioned why I would care about that, and while I’m as bored as anyone with our relentless Round of 16 exits, I just want my team to finish as high as it can up the table. I’m one of those crazy people who wants us to win every game we play in, and that’s it.

There were some encouraging signs last night too, not simply Ozil getting a goal and an assist and looking instantly more confident, but midfield worked. Xhaka was excellent and you could see him apply some much needed discipline to his game. There were moments when he might have dived in, but he stayed on his feet and avoided the yellow card which does, like it not, restrict his game a bit when it’s issued.

He made 107 passes, spreading the ball beautifully at times with both feet, and with Mohamed Elneny beside him – who misplaced just two of his 71 passes – there was a measure of control to our midfield play that has been missing for great swathes of this season. I hope this was noted by the manager, because it would be good to build on this a little bit rather than chop and change again for our next fixture.

In goal Emi Martinez was calm and dealt well with what was thrown at him (not much in fairness) and a nod too to Gabriel who had a fine game alongside Mustafi. When you see how we’ve struggled in the past with Andy Carroll it was good see us more or less nullify him. Crucially, a big part of making him ineffective was cutting off the supply lines, and as a team we worked hard to prevent them getting into dangerous areas to get those crosses in.

Overall, a game which should help ease a little bit of the pressure, because ultimately winning games is a balm to the burns we’ve suffered in recent times. It doesn’t mean there aren’t still problems or issues, but this morning it’s nice to be writing about something good which has actually happened, rather than driving ourselves potty trying to figure out why something hasn’t happened yet.

We have a weekend off, sadly, because you’d love to take this little bit of momentum and run with it as soon as possible, but another London derby awaits on Monday evening when we travel to Crystal Palace, and hopefully extend this splendid unbeaten run we’re currently enjoying so much 😉

We’ll have news throughout the day on Arseblog News, Tim Stillman is here later with his column, and I’m back tomorrow with an Arsecast. Until then.