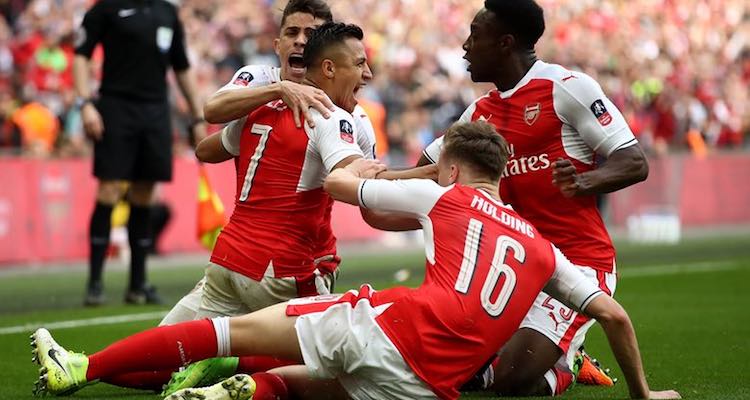 A third FA Cup final in four years awaits after we pulled off an extra-time win over Man City at Wembley yesterday.

Arsene Wenger kept faith with the team and formation that beat Boro 2-1 last week, and in the first half it was evident there were still some teething troubles. City had most of the ball and played the game  primarily in our half.

From an attacking point of view we didn’t create much. We had the ball in the net but Koscielny’s effort was rightly ruled out for offside, and towards the end of the first period we were on the receiving end of some good fortune.

Leroy Sane’s cross was adjudged to have gone out of play – it didn’t – meaning Aguero’s effort (saved behind the line by Cech) and Sterling’s subsequent follow-up were disallowed. City can feel pretty aggrieved about that, but maybe it was a sign luck was on our side.

Both sides could have had a penalty in the first 45 too. Oxlade-Chamberlain definitely made some contact with Aguero, while Jesus Navas fouled Alexis in their box. The referee and his officials didn’t have their best day in that regard – although BT’s laser-like focus on him during the half-time break felt a bit strange.

In the second half we looked a lot better, and had a lot more control of the game. However, when Aaron Ramsey carelessly gave the ball away on the edge of their box, we got caught badly. Poor positioning from Xhaka and Monreal allowed a simple ball over the top to set Aguero free, and he raced towards goal.

His touch as he got into the box was heavy though, I thought Petr Cech should have kept coming to smother the ball, instead he hesitated and made himself smaller, allowing the City striker to dink the ball over him to make it 1-0. It was fairly avoidable on a number of levels, but then it was all about how we’d react.

With confidence so low recently, we might have seen heads go down, but one of the most pleasing things about yesterday was the notable presence of some character from the Arsenal players. So, ten minutes after they scored, when Oxlade-Chamberlain whipped in a lovely cross to the back post, the determination of Nacho Monreal to get on the end of it made the difference.

The Spaniard timed it perfectly, finishing smartly with his right foot to make it 1-1. Game very much on, and it was a great cup tie. Cech made up for his mistake on the goal by getting just enough on a Yaya Toure shot to see it rebound away off the post, Fernandinho thumped a header off the bar, and Danny Welbeck – on for Giroud – saw a shot drift just wide when he should have pulled it back for Alexis who would have had a tap-in.

The introduction of Welbeck really seemed to change the dynamic of the team from an attacking point of view. Not much of what he did came off, but his energy and movement caused City far more problems than Giroud, and he looks a much better fit to play up front in this system than the Frenchman.

Extra-time saw further chances for us, the best of which came from a corner when the superb Rob Holding headed just over the bar, but as he did back in 2015 against Reading, Alexis Sanchez grabbed the winner. It came from a free kick won by Welbeck’s strength and determination, and when the ball bobbled around the box the Chilean got a foot on it, and then finished from close range to make it 2-1.

It was a goal I think our performance deserved, but there was still work to do. Last ditch defending by Holding saw him put the ball just wide of his own post; Delph hit the side-netting after a last-gasp intervention from Hector Bellerin; de Bruyne shot just wide; and we wasted chances to seal the deal – Welbeck heading wide and Ozil slowing down a couple of good counter-attacks when you’d expect more from a player of his quality.

In the end though, we held on, we go through, City go out, and it’s Chelsea in the final next month. Afterwards, Arsene Wenger said:

I felt that we had a strong response today. Slowly, we became better and better and in the second half I felt we were very strong, in extra-time very strong, we always looked solid and dangerous. We played more in the second half and I felt as well it was a big test for us today – it was a mental test because many people questioned ‘Can we turn up in an occasion like that?’

That’s why I am very proud for the players, because they showed they are united and determined.

And for me – beyond obviously getting through to the final – that was the most pleasing thing about yesterday. It looked like there was a response from the players. What Alex Oxlade-Chamberlain said after the Boro game might well have been viewed as cynical by some, but it still needed to be said. After that, however, the words needed to be backed up with actions, and I think we got that yesterday.

Coming from behind has hardly been our forte this season, so to have done that on a big occasion like this is very pleasing. There was a togetherness and organisation about the performance that we haven’t seen for a while, and although we rode our luck a bit at times, I think it’s obvious how working hard and not switching off at vital moments can influence the outcome of a game.

There were some fantastic individual performances too. Gabriel had his best game for us by a long way, and on the other side Rob Holding – just 20 years of age and playing only his 12th game for the club – was outstanding. Calm defensively, assured on the ball (that bit when he sauntered up the wing!), and not at all overawed by the occasion.

The wing-backs both take plenty of plaudits, I thought Monreal slightly edged it over official Man of the Match Oxlade-Chamberlain, but that’s a minor quibble, and in a big game, ‘Animal Alexis Sanchez‘ made the difference.

It wasn’t perfect, I don’t think this is a system that will work properly with a striker as static as Giroud up front, and there are still some details to be ironed out, but maybe those will come with time and as the players grow more accustomed to it.

As ever, because this is the Internet, it’s necessary to qualify the happiness one might feel about reaching the FA Cup final. By being pleased about this, it doesn’t mean you think everything in the garden is rosy again, or that all of our problems have been solved. It just means you’re happy your team played well in a game and has the chance of winning a trophy this season.

I can only ever speak for myself, but I felt something re-connect yesterday watching that game. I won’t say I was indifferent beforehand, but I definitely wasn’t that confident. However, as the game went on I found myself more energised, I guess in response to seeing players who played like they cared. By the end I was just buzzing at what was a big win in a big game over a big team. Simple as that.

And look, of course there’s more to come. We can’t say we’ve turned a corner, because there’s no rest for the wicked. There’s a game against Leicester on Wednesday night, then Sp*rs at White Hart Lane next Sunday. What happens in those games will tell us whether we’ve really found our spark again, or if this was just a temporary respite, so I’m not getting carried away.

I just think that reaching the FA Cup final is something to enjoy. If the demand and expectation is for the club to win trophies, how can you dismiss – as I saw so many people do yesterday – a game which gives us that very chance? I know there’s a bigger picture, but still.

All in all though, a very enjoyable day with some promising signs. Let’s hope we can use this to finish the season strongly, because there are some very tricky games ahead. Whatever happens though, we have a final to look forward to at the end of May, and that’s always something special.

James and I will be recording an Arsecast Extra for you, I’m just not sure exactly when. My podcasting colleague has spent a lot of the weekend in hospital due to illness – and you all know how when he’s in pain or sick that Arsenal do well, so thanks for that James – but it means schedules are a little disrupted. If it’s not this morning, it’ll be later this afternoon, but we will have a podcast for you today.

As ever if you want to send questions or topics for discussion, fire them over to @gunnerblog and @arseblog with the hashtag #arsecastextra.