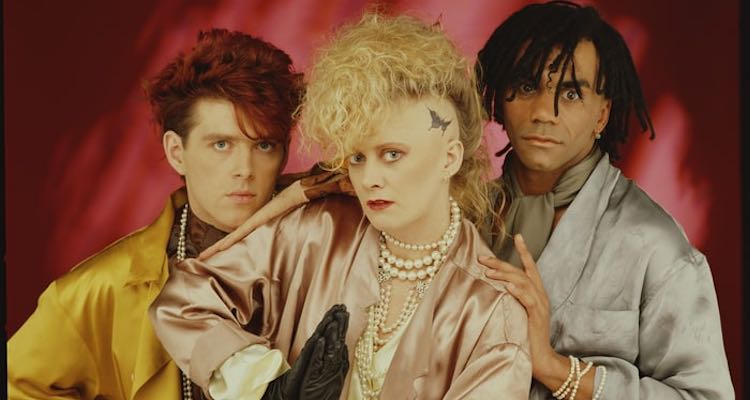 Morning. It’s Easter, ostensibly a day of celebration and chocolate, but for me I like to think of it as the one day of the year when other 80s bands could really annoy Go West by making them move in the other direction.

I can just imagine those relentless japesters Hue & Cry giggling away to themselves, while the Thompson Twins look on inscrutably from the background because they weren’t twins at all, and there were three of them. Man, the 80s really knew how to mess with your mind.

Not as much as Arsenal, obviously, because they’re basically Hue & Cry crossed with Belouis Some with a side-order of China Crisis. Ahead of tomorrow night’s game against Middlesbrough, Arsene Wenger was asked if his situation was having an effect on the players. Having previously said this was not the case, he sounded less sure this time:

I honestly don’t know but I hope not. When I speak about mental test it is to perform, no matter what the circumstances are around you. Is that an influence? I’d say I hope not.

I see his point but, professionals have got to be professional and all that, but to me this is a bit like asking someone on a ferry if the huge waves and boat lurching from side to side is contributing to the massive amounts of vomit they are spewing all over the deck. And ewww, why are there peas in it?

The two things are inextricably linked, there’s no way around it, and as long as we remain in the dark – and I’m assuming the players know as much as we do about what’s happening which is kinda ludicrous – it will continue that way.

No amount of chat about focus, professionalism, character, responsibility and all the rest will do anything to settle the underlying issues that we’re dealing with. Or not dealing with. Anyway, I really don’t know what else we can say about it at this point.

Meanwhile, reports that Wenger has blocked the return of Thierry Henry should be taken with a very large pinch of salt in my opinion. Firstly, this is apparently the brain-child of Josh Kroenke, and that in itself should have people suspicious. The Kroenkes might be completely shit owners*, but they’re not so stupid that they don’t know what’s going on.

What better way to curry favour than to tie yourself to a legend, the club’s record goalscorer, and leak a story that makes big-bad Wenger look the villain? It’s as transparent as it gets, and while one of the manager’s big weaknesses is his reluctance to shake things up on the coaching front, this is little more than Kroenke PR.

Secondly, Thierry Henry had a job as an Arsenal coach, and when asked to choose between that and the money on offer from Sky, he plumped for the latter. That’s not a criticism: if there’s a job that pays a nice salary and one that can buy you an island, I know which one I’d go for, but it’s still a fact that he left the club when asked to prioritise one over the other.

Thirdly, I’m not sure that working with Roberto Martinez is going to imbue you with the attributes required to help a team that can’t stop conceding goals. All in all, a big load of bolloxology, if you ask me.

*Just to clarify here: the ‘might’ is a grammatical construct, I don’t mean it to leave anyone in any doubt as to whether or not the Kroenkes are shit owners. They absolutely are. I wouldn’t let them look after my dog for two minutes, let alone make the big decisions about this football club. But that’s the situation we’re in.

Other than that absolute tripe, not a great deal else going on, so I’ll leave you with a couple of extra bits to read.

1 – Lewis Ambrose takes a look at Sead Kolasinac and gives some insight into the player Arsenal will be getting ahead of next season.

2 – The Arsenal Gent provides his weekly review, likening the Gunners last 7 days to the Garden of Earthly Delights by Hieronymous Bosch. It’s as good as you think it is.

Right, whatever you’re doing today, have a good one. More tomorrow as we preview the Boro game and all the rest.