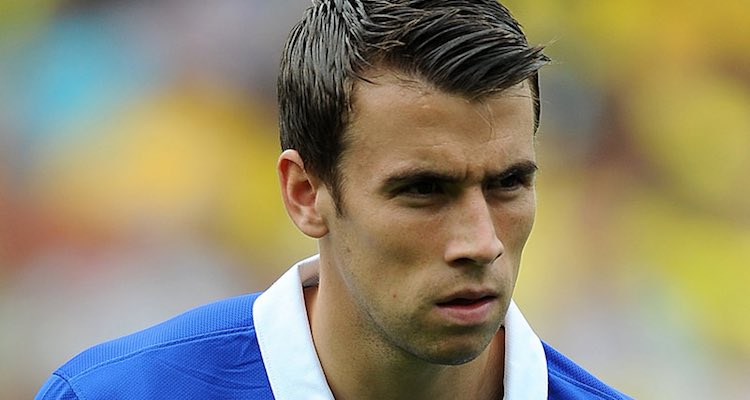 So Ireland and Everton full back Seamus Coleman had his leg broken last night by a shocking challenge from Wales and Aston Villa full back Neil Taylor.

First thing to say is that it’s important to make the distinction between ‘breaking his leg’ and ‘having his leg broken’. The first one makes it sound as if he was in some way culpable or has to share some of the blame, and that could not be further from the truth.

Coleman’s had his leg broken by a disgusting challenge, and one that will feel very familiar to Arsenal fans. We’ve seen it before when Dan Smith launched himself into Abou Diaby’s ankle and basically ruined the then 19 year old’s career. We saw it when Martin Taylor’s over the top lunge into the shin and ankle of Eduardo da Silva caused such damage to the Croatian international that there were fears he might have to suffer an amputation.

We saw it when Aaron Ramsey had his leg snapped in two by Ryan Shawcross. And this is not to make this about Arsenal, or take the focus off Seamus Coleman, but I feel more than many we have an understanding of these kind of challenges and the damage they do.

Let’s make no excuses here: Taylor’s challenge – I will not call it a tackle – was appalling. I suppose I should be surprised by the amount of people who want to pass it off as an accident, make excuses for him, or say he didn’t mean to break Coleman’s leg. Of course he didn’t set out to injure an opponent that way, but he fully understood the potential consequences of his challenge.

Footballers – more than anyone – know what can happen if you go in that high, that late, that far over the ball and with your studs showing. Taylor knew. Every player on that pitch knew, so let’s not cast him as some kind of innocent in this.

A murderer isn’t a murderer until they kill someone, and then they are. And just to be clear because this is the internet, I’m not likening Taylor to a murderer, just pointing out that labels exist because of what you do, not what you didn’t do before.

This is something I wrote in 2010 when we were dealing with the Ramsey injury at Stoke, talking about those kind challenges:

If I can liken to it something else it’s speeding. The young guy in his car who goes out, thinking he’s Johnny Invincible, until he careers around a corner too fast and mows down a child. He didn’t mean to, but he did it, and he is responsible. “I didn’t meant to run the kid over” and “He’s not that kind of driver” aren’t acceptable excuses in a courtroom.

Nor should they be on a football pitch. Taylor knew what the consequences of going in that way could be, and he still went in like that, so let’s not give him a free pass or make any kind of excuses for him. Nobody’s saying he’s evil or someone who set out to break Coleman’s leg, but he did break it, that’s the bottom line, and that’s what the focus should be on.

At least for now in the immediate aftermath, and then something has to change about the way dangerous play continues to be lionised in the English game. Alexis Sanchez was lucky to avoid serious injury from Ireland’s James McClean last weekend. When a Lincoln player launched himself off the ground at Mesut Ozil a couple of weeks ago the German only avoided serious injury because the defender didn’t catch the foot that was planted into the ground, and on BT Ian Darke and Chris Sutton chuckled over a ‘tasty challenge’.

And don’t get me started on the sort of twisted thinking we heard from Jamie Redknapp who declared Marcos Alonso brave as his elbow smashed into the head of Hector Bellerin, knocking him briefly unconscious before he even hit the ground. There were even some people, paid actual real money to talk about football, who said that the Arsenal full back just didn’t fancy it on the day and used it as an excuse to go off. I mean:

So, the problem is serious. Firstly, the role of the media. Everyone who truly loves football loves the fact that it’s a physical sport, and it’s important that it remains so. However, the refusal to properly condemn players for acts of what amount to violence, that in some cases come close to assault, is a big problem. The ‘they don’t like it up ’em’ culture is archaic and contributes massively to the kind of injury we saw inflicted on Seamus Coleman last night.

For every one pundit who might call it for what it is, you have a dozen more who will say that Coleman was just unlucky, that Taylor’s not that kind of player, he just wanted it more, that these kind of injuries are rare and just part and parcel of the game, that it was simply unfortunate. Those people have no place telling anyone anything about the game of football because they don’t understand it.

The second problem, and by far the largest, is the fact that disciplinary procedures remain stuck in the stone age too. Neil Taylor will serve a three match international ban, and play for his club next weekend. Seamus Coleman faces a long time out of the game, and what he’s going to have to go through will be painful, traumatic and extremely difficult.

I don’t know how many times I’ve written on this blog about the need for a sliding scale of punishment. Think about this: Granit Xhaka got a three match ban for ad admittedly cynical trip on Swansea player; Martin Taylor, Ryan Shawcross and Dan Smith all got exactly the same for injuring an opponent and putting them out of the game for months/years (when you add up all the other injury absences).

By any measure that’s ludicrous, yet the FA, UEFA and FIFA refuse to properly deal with incidents like this. It’s like giving giving murderers and shoplifters the same sentence for their offences. And as long as there’s such an obvious flaw in the disciplinary system, there’s no thought in the minds of some players about not making challenges like Taylor did last night.

Use video evidence to review tackles of players who leave the ground the way some do. Even if the referee has seen it and dealt with it, hand our retrospective punishments based on  video evidence. Start educating players not to ‘tackle’ that way, and the first way to get that into their heads is by making them miss games. A deterrent, if you like.

As of yet the authorities have never shown any inclination that player safety and welfare is something they care too much about. There’s always another player, always another body to fill the gap, which helps obfuscate their responsibility to the ones who end up injured. There will be some outrage, it will die down, things will move on, and nothing will happen.

Then another player will get injured like Coleman or Ramsey or Eduardo or Diaby, and we’ll go through this whole pathetic thing again, and again. The authorities are failing the players and something really should be done about it beyond some mealy-mouthed excuse making and pearl-clutching TV coverage – until the next time they’re laughing and joking about some bloke being ‘smashed’.

I include referees and officials in this as well, because they play a part. When challenges like this or this aren’t dealt with properly, it’s little wonder that players are willing to cross a line that they know fine well they shouldn’t, because there’s a chance they might get away with it. It ties in with those who run the game, and frankly any referee who doesn’t deal with something that obvious has no business being on a pitch at any level, let alone the Premier League.

However, the PGMOL officials are only accountable to themselves. A perfunctory ‘relegation’ to take charge of a game at a lower level is not only meaningless, but shows outright contempt for the teams and players in that division. Think about that. He’s not good enough to referee the Premier League, but you lads get to have him. It’s outrageous really.

Finally, as meaningless as it is, I wish Seamus Coleman the very best in his recovery. It was heartbreaking to see him injured that badly. As I said, we’ve been through it with Arsenal players too many times, and the thing that I can’t escape is how those players were never the same again afterwards.

Diaby’s injury problems were a joke to many, but they all stemmed from that disgusting challenge on him, and that Arsenal gave him every chance to rebuild his career is something I think we should be proud of as a club. Not forgetting the humanity of the situation is a good thing – it’s not something to use as a stick to beat the player, manager or club with.

Eduardo came back eventually but lost that bit of sharpness that made him so effective, and while it looked like Ramsey had got away with it – perhaps his youth allowing him to recover better – it’s almost impossible not to think his constant muscular problems are connected in some way.

At 28 Seamus Coleman is going to have go through this at an age when the effects might be truly debilitating, and the stark reality is he may never find his way back to the level he was at before last night. It sounds harsh to say it, but it’s true, and it’s why excuses, the not that kind of player bullshit, and all the rest, have no place in this discussion.

I hope I’m wrong, and I hope he makes a full recovery, but he’s facing month after month of pain and hard work, and it’s going to be very difficult for him. I wish him and Everton all the luck in the world.

Finally for today, if you haven’t had a chance to listen to this week’s Arsecast, it’s pretty much Arsenal free so there’s selling point 1! Number 2 is a fascinating chat with a brilliant author and interviewer, Donald McRae. We chat about growing up in South Africa, how apartheid shaped his life and career, sport, interviewing and lots more. Listen below, more from me tomorrow.