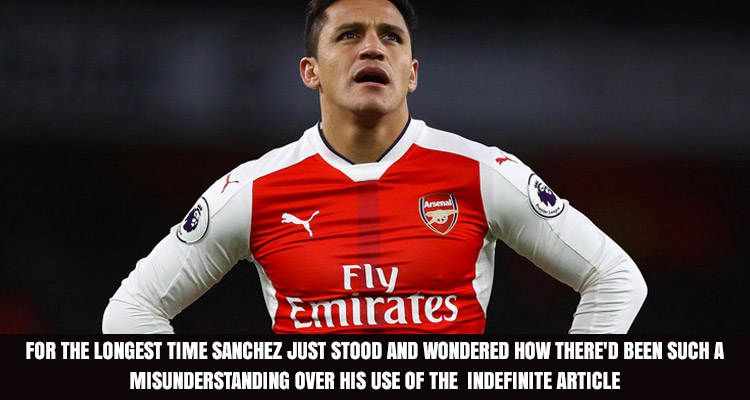 Good morning, football edges ever closer as we start to get ready for Man City on Sunday.

But what’s this? Scary headlines about Alexis Sanchez hinting at a move to Chelsea? You couldn’t move last night for stories from the BBC, Sky, the Telegraph, the Mirror (who also did a clickbaity Tweet round-up of Arsenal fans reacting to the possibility of him going there), they were all at it.

Alexis does not rule out Chelsea switch. Alexis hints at Chelsea move? Alexis wants to stay in London?

Well, what exactly did he say to spark such headlines? He was speaking after Chile’s 3-1 win over Venezuela, and the first thing he did was hint that he might actually see out his Arsenal contract and stay at the club another year:

I am happy in London and I hope to finish my contract well there.

Of course you can look at this with a cynical eye and say he knows that Arsenal can’t allow a prize asset to leave for free if he won’t sign a new deal, but still, it’s not a particularly outrageous thing to say.

I’d like to stay in a city for a long time, in a team that is a winner, with winning mentality. I’m 28 and I have a lot ahead of me.

Now, again you could easily say ‘Well that team is not Arsenal, LOL etc’, I get that, but note how he says ‘a city’, he does not say ‘the city’, although rather sneakily many of the reports say ‘the’ not ‘a’. Which means he’s open to going to any city who have a team with that winning mentality that he seeks, he’s not referring specifically to London.

Making the ‘a’ a ‘the’ allows you to then add to the speculation from earlier in the week about how Chelsea were making him their top priority this summer. ‘A city’ isn’t anywhere near as exciting, but let’s not worry about accuracy for the sake of some hits and headlines, eh?

Anyway, while I remain as dubious as anyone else about where he’ll be playing his football next season, I also can’t see us selling him to another Premier League club. Even this Arsenal board, capable of Lee Dixon lobbing it over Seaman style own goals as they are, must know that it would not be wise to take a bit more money from someone like Chelsea or Man City.

I think that might be the thing that tips people well and truly over the edge. We have previous in this regard, of course, but those sales came at a time when you could make a good case for us being unable to turn the money down. Now, with record sponsorship deals, record TV revenue, a record kit deal (for us), and more cash in the bank than almost another club in the world, we can – and must – resist approaches from domestic rivals.

Quite who will be looking for him on the continent remains to be seen. Juventus? PSG? Bayern Munich? Beyond that, where are the clubs who can pay the big wages he’ll want and who have that desire to win things? So his options may well be limited, but there’s just no way we can let him go to Chelsea or Man City etc.  If we do, I’ll be distributing a range of pitchforks – flaming and regular, poison or shit-tipped – and people use them as they like.

As with almost everything involving Arsenal at the moment, this is a situation around which there exists an air of uncertainty, so we’re delving into the realms of speculation and what might be. I’m not especially confident that he’s going to stay, and I’m under no illusions that Arsenal will do anything other than sell him if it comes apparent he won’t extend his deal, but I think it will be abroad if and when he does go.

Meanwhile, Mesut Ozil has spoken to Sport BILD about his current situation. In an interview with them he admits his own form has suffered in recent months after a good start, but also makes the point that he’s not alone there:

When it isn’t going great for the team, someone gets picked out – unfortunately, often it’s me. I’m not the type of player to chase after the ball the whole time, everyone knows that. My potential lies far more on the offensive side. I’m supposed to be dangerous, create chances, score goals. When I don’t get the ball, that’s difficult.

Words that probably won’t placate many of his critics, but it’s still a reasonable point to make. It also overlooks the fact that in terms of distance he almost always outruns Sanchez during games, but the Chilean’s shorter, obvious bursts, are much more noticeable.

My feeling is that there’s been something else going on with Ozil, his loss of form has been so profound that it speaks to a bigger problem than him just not caring anymore or giving up, but I also feel that there’s a bit too much focus on the form of individuals when the issues with the collective are far greater.

The team itself has been really poor and while you always hope a player of Ozil’s quality can play a part in setting things right again, there are fundamental issues with our set-up that have affected almost every single player. Bar Sanchez’s goals, and a couple of wins over non-league teams, the contributions from everyone have been below par and I think you have to look at the reasons for that rather than point fingers at individuals and just say the players are shit or don’t care.

The same players who can barely win a game now are the same ones who went 19 without losing after the opening day of the season. There’s definitely more to what’s going on than individuals.

Right, the manager will hold his pre-Man City press conference this morning, we’ll have all the stories on Arseblog News throughout the day. Tim Stillman is here with his column later, I’m back tomorrow with an Arsecast.