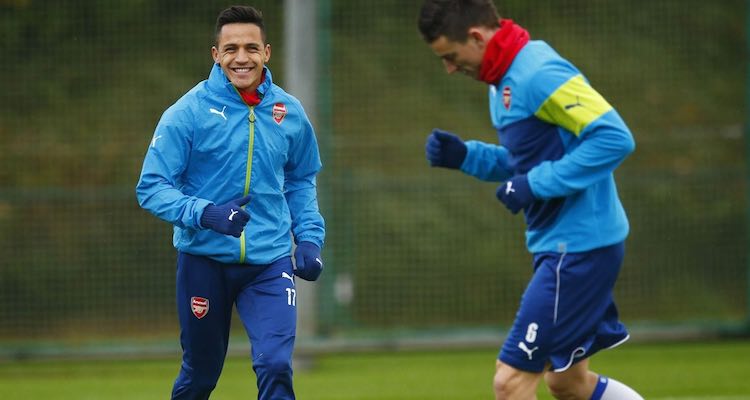 Well thank you very much PSG for taking the heat off Arsenal. Having won their first leg against Barcelona 4-0, they were 3-1 down with just 5 minutes to go at the Camp Nou last night.

Neymar’s free kick to make it 4-1 in the 88th minute was brilliant, and the Brazilian put home a penalty after one of the most obvious dives you’ll ever see from Luis Suarez. Doesn’t matter though, it’s Barcelona at home in Europe, they get what they want. Still, that still left PSG going through on away goals, but in the dying seconds Neymar clipped a lovely ball into the box, Sergi Roberto stretched to score what was an astonishing winner and as Barcelona celebrated, PSG were left shell-shocked.

I never thought I’d see Arsenal out-Arsenaled so soon after our dismal night against Bayern, but if anything sums it up, it’s this:

THREE of those were from kick-off after conceding Barcelona goals. pic.twitter.com/G0odu6jhjj

I mean, that’s a choke and a half. When PSG wake up this morning the cockerel will cry ‘Choke-a-doodle-doo’. Incredible, I don’t think I’ve ever seen anything like it. How is it even possible to have that little of the ball in the last 10 minutes? I know Barcelona were pressing for goals, but it’s genuinely remarkable.

So, Barcelona go through, PSG go out with their tails between their legs, and the two qualifiers from our group have been eliminated from Europe in laughable style. And maybe because I’m a small, petty man, or maybe because I’m desperate to be distracted from our own misery, I’m glad something awful happened to someone else.

No doubt the PSG fans who were corralled into that upper tier, having been asked to enter the stadium by crossing a rickety Indiana Jones style rope bridge over an alligator filled moat, were kept in the Camp Nou for ages afterwards too, ensuring that their night of shame was made even more acute. That’s just the way they do things over there. And what a fun trip back home today.

Back our way and things are still a bit awkward. Last night came reports that Mesut Ozil has yet to respond to Arsenal’s offer of a new contract; Alexis Sanchez probably has no intention of signing a new deal; and various journalists have been briefed by the agents of Alex Oxlade-Chamberlain who looks like he could be off this summer too.

Like his two senior teammates, he’ll have just 12 months left of his contract in June, and as yet Arsenal have yet to make him an offer of an extension. The stories suggest that even if they were to do so at this point, the player wouldn’t sign it because he wants to go somewhere else for more regular football, and let’s be realistic, if Arsenal really wanted him to stay, they’d have been in talks with his people long before now.

Maybe there’s been no offer because there have been doubts over where he’s going to play etc, but in recent weeks some good performances in the middle have, at least, provided some clarity as to his position. It’s obvious that he’s far better centrally than he is out wide. And I do think that this season there have been promising signs from him, but how very Arsenal it would be to decide to give a player the chop as he’s maturing and on the back of his most productive season to date?

He’s not alone though. Jack Wilshere will return from Bournemouth with 12 months left on his deal, there’s been no offer to him. Kieran Gibbs is in the same position, no offer. And I don’t think there’s been any new terms offered to Szczesny despite the fact there are big question marks over the goalkeeping situation at the club.

With the manager’s situation still very much up in the air we’re heading towards a summer which could be as unstable and ill-managed as 2011. It was funny last night to see some stories emerge about how the board were ready to take a tough line with Arsene Wenger, and that any decision about his future would be mutual. I mean, haha.

The only way it will be a mutual decision is if Arsene signs the two year deal that Ivan Gazidis and Stan Kroenke want him to sign. They won’t sack him, they won’t suggest to him that he walk away – the final decision will be made by the manager and the manager alone. And still the taciturnity from board level continues. Stan remains silent, and Gazidis, who nobody has heard from in months, does a good Stan impression as Wenger, for all his faults, continues to front up week in, week out.

James Olley very pertinently asks in the Evening Standard, if they are ready to give the manager a new two year deal, why don’t they explain why? Why don’t they publicly back him if they’re prepared to do so in private? I think we know why.

Meanwhile, in the Guardian there was a little more info about the training ground bust-up that certainly didn’t happen last week.

A furious row. Tempers were frayed. Something happened between two players which led to one of them being disciplined for a hugely important game that Arsenal had to win. It’s not too difficult to work it out.

And look, these things happen more often than people think on the training ground. The bigger issue is the fact it got leaked, and whatever the reasons for it and whatever the source, it speaks to a disharmony within the squad that’s a bit worrying.

The expectation that everyone is best mates and super friends and great pals is completely unrealistic, but you do also need to have a bit of togetherness and, at the very least, a desire to get to the same place from a footballing point of view. Players can hate each other, but if they’re all ready to dig in on the pitch, that’ll cancel that out for the most part.

However, it’s hard to look at the performances lately and make that case for Arsenal. Does it really feel like everyone’s pulling in the same direction? So, whatever happens this summer is still some months away, the task now is to try and repair – as much as possible – the relationships within that dressing room, and for the players themselves to play their part too.

They also have a responsibility to the club that pays their wages, and to the fans who need them to leave aside whatever personal issues or grievances they might and instead focus on performances and results. When even Theo Walcott is saying they need to stop fighting each other, you know there’s a big wake up call needed because like it or not, there’s still plenty of football to play between now and May.

There’s also still the possibility of a trophy, in the FA Cup, and that really should be the thing to bring them together until the final game or until that’s no longer a possibility. After that, let all hell break lose, but until then they need to sort their shit out.

Right, that’s that. The manager meets the press this morning ahead of the quarter-final with Lincoln on Saturday evening, and much like the Sutton United game, the spotlight is on almost anything but the game itself. Let’s hope it gets the coverage it deserves rather than more questions about the future that nobody is prepared to answer.

Tim Stillman is here later with his column, all the presser coverage will be over on Arseblog News, and I’ll be back tomorrow with an Arsecast and all the rest.

Final thing: We’ve had a bit of a hacking issue on the site over the last couple of days. It’s been extremely difficult to find the culprit, and we’ve had to hire experts and everything. Just to note, if you get a pop-up asking you to update your browser, just close it. Nothing bad will happen if you do that. If anything downloads, please just delete it. Do not install anything.

I think we’ll have it fixed this morning and apologies for any inconvenience over this. You all know how hard we try to avoid any kind of disruptive advertising so this has been particularly painful.