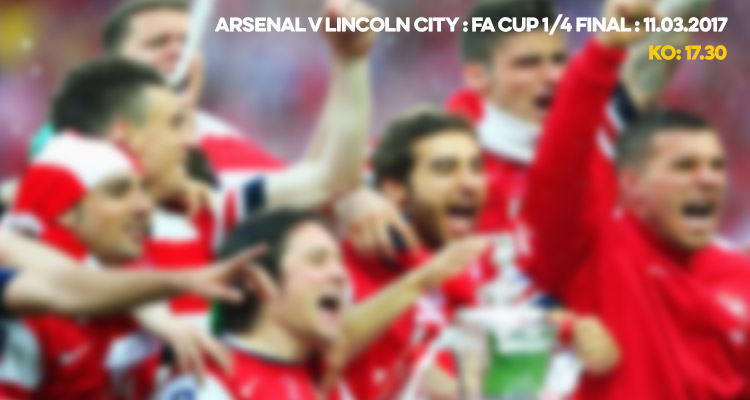 In different circumstances an FA Cup tie against non-league opposition might well be a chance for the manager to rest players and rotate his squad a little more than usual.

Those circumstances would involve us still being in Europe and in the title race, so there’s no excuse today for playing anything other than our strongest team against Lincoln City. Of course, what exactly our strongest team is remains open to debate, but as much as I like to see the likes of Maitland-Niles or The Jeff, they should only be on the bench, if included at all.

The FA Cup, regardless of how you choose to view it, is a trophy, and it’s the only we have left to play for this season. We don’t play West Brom in the league for a full week, so there’s no cause to be alarmed that some of our delicate flowers might be tired, and anyway, didn’t Arsene Wenger say that part of the reason we played poorly at Liverpool was because we had time off?

There are some doubts over Danny Welbeck and Alex Iwobi, who have been stricken by the bug that appears to be going round some of the players (sickofititis) but beyond that everyone appears to be fit and available. The only small change I’d consider in terms of a young player is Rob Holding, who has done really well every time he’s played this season, and I’d like to see a bit more of him.

Beyond that, the big boys are playing. Alexis Sanchez, in. Mesut Ozil, in. If nothing else it might be a good opportunity for them to find their spark, even if whatever they do will be generally dismissed because of the opposition. I want to see Granit Xhaka and Aaron Ramsey in midfield again, it’s not perfect but it’s the best combination we’ve got and it needs to start working.

Lucas Perez tends to start in the cup and I’d have no problem with him getting the nod again today. He works hard, he’s productive, clever and intelligent with his movement, and if I were him I’d be pretty fed-up with how little playing I was getting. Especially when he does play well and then ends up on the bench again.

There’s talk of Petr Cech being given the nod over ‘cup keeper’ David Ospina. I’m all right with that, but as I’ve said before, I’d much prefer if Arsenal had a keeper that was so good that you don’t have to consider a time-share operation for the man between the sticks.

As for Lincoln, I don’t know a lot about them, but any team that beats two Championship sides and a Premier League team along the way deserves respect. Turn up thinking it’s easy and you might well get a shock, especially with our form the way it is.

Per Mertesacker spoke about that very thing, saying:

The way they went to Burnley and won, in that fashion, that needs to be respected. We cannot underestimate any side in any league in this country, and that’s what I’ve learned.

We’ve had our moments down the years in cup competitions, that’s for sure, and anything other than victory today would go down in the same annals as Wrexham or York or Bradford a couple of years ago. It’s 103 years since a non-league team made it this far in the FA Cup, so that puts what Lincoln have done into perspective. What an amazing achievement it’s been for the club and to come to the Emirates to play the Arsenal is a dream cup tie for them.

And I hope we smash them.

Sorry, but that’s what I hope before every Arsenal game, and I’m not about to change my hope-settings now. I realise that I am frequently disappointed because of this, but still. That’s just the way it is. None of this hoping we lose because that suits a particular agenda. You can want things to change but still want your football team to win.

And frankly the opinion of anyone who says they want their team to lose is one you should pay no attention to whatsoever. I might go so far as to say those people should be eaten by angry bears, but that’s just me. The best thing to do is ignore them as much as possible.

So, we’re a game away from a semi-final. This team has let itself down in recent weeks, and today represents a chance to make up for that a little bit. Let’s hope they’re ready for it.

For some extra reading this morning, The Gent is in fine form this week, so check out his weekly review on how to deal with the rest of the season.

And between now and kick-off, if you haven’t had a chance yet to listen to this week’s Arsecast, we have three guests discussing what was a difficult week for the club. We discuss on-pitch stuff, boardroom stuff, players, manager, the FA Cup tie against Lincoln and lots more. Plenty to get you ears around, so happy listening to that.

We’ll be back later with a live blog and all the post-match stuff over on Arseblog News. Until then, have a good Saturday and come on you reds.