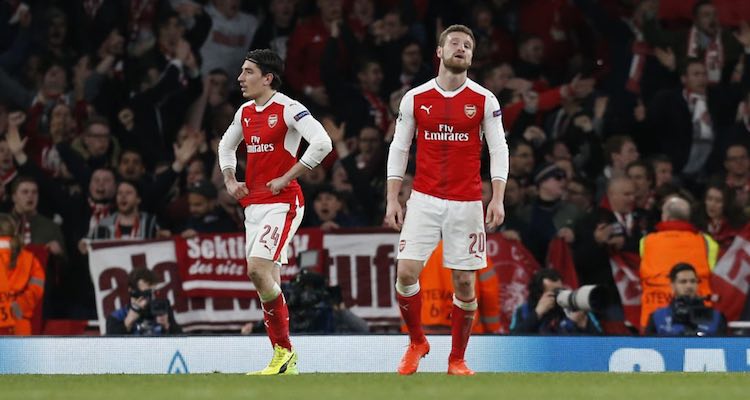 If this Round of 16 has taught us anything, it’s that Laurent Koscielny is Superman.

I kid, of course, because while I do think his departures had a profound effect, especially last night, the absence of one player is not a good reason for what happened to us. Going down to 10 men makes it more difficult, naturally, but that old cliche about how it’s harder to break down a team that’s more focused on defending is only true if the team is actually focused on defending.

With 10 men against one of the best teams in Europe it never occurred to us to just sit in and see if we could do some damage limitation. It was 6-2 on aggregate with over half an hour to go, we weren’t going to qualify, and on a night when we wanted this team to restore some pride, it ended up embarrassing itself even further.

It had been going so well. After a bright Bayern start we really got into the game. Midfield looked competent, a lovely change from recent weeks, with Ramsey’s energy, Xhaka’s passing, and Oxlade-Chamberlain buzzing around. There were moments of genuine creativity, although some poor first touches and control let us down.

And just when you’re about to unleash another ‘Aw Theo’, he put us ahead with a fantastic goal. He found space in behind the Bayern defence, and with no other option than to shoot from a tight angle he blasted the ball over Neuer’s head before he could even react and into the roof of the net.

I thought we should have had a penalty too, when Alonso clearly fouled Walcott, but the official behind the goal who was standing yards away didn’t agree. He was saving himself for later in the game. And even early in the second period there was a great chance for Olivier Giroud to score, but he headed a Ramsey cross over the bar rather than make it 2-0.

What might have happened from there is anybody’s guess but it’s a moot point because a few minutes later we were down to 10 men. The referee initially showed Koscielny a yellow card for what was a sumptuously clever dive from Robert Lewandowski, before changing his mind and issuing a straight red. This came on advice from the same official behind the goal, and I think it was a bizarre, wrong decision.

It’s certainly one that irritated Arsene Wenger who said afterwards:

I share his frustration at that. This was a referee in charge of his first Champions League knock-out game, and the best I can say about him is that he was out of his depth. At 1-0 up we were on top of that game – and for those who want to wave the aggregate score at me at this point, there’s an obvious difference between ‘game’ and tie. I don’t think we were going to qualify, but I did think we were in a position where we could have taken a decent result and restored some belief to what is an increasingly beleaguered looking squad.

However, what came next is just symptomatic of the malaise that is enveloping this club. As with the first leg, what Arsenal should have done is just stay compact, deny them space, and try and keep them out, but this is a team that doesn’t even consider that kind of approach. The only thing we know is ‘go for it’, and when you do that against a team as good and as ruthless as Bayern, they’ll pick you off at will, which is basically what happened.

I don’t think the substitutions helped, with Ozil, Coquelin and Lucas coming on for Ramsey, Giroud and Alexis. We didn’t bring a defender on to replace Koscielny, asking Xhaka to fill in at first, before Coquelin went in alongside Mustafi. And basically the team fell to pieces. In the cold light of day, I’m surprised – and thankful – that the scoreline wasn’t even more horrendous.

I don’t need to go into the goals we let in. 10 man Arsenal caught with 7 or 8 players ahead of the ball, trying desperately to score goals that wouldn’t have made any difference anyway. I suspect everyone in the stadium, bar the manager and players, had accepted the tie was over after the penalty, and I’d have been just happy to see the team cope with the situation in any meaningful way.

It was like we had no contingency plan for this situation. We just keep trying to do the same thing we did with 11, but just 1 less. We’re like a inverted footballing Spinal Tap.

By the end I just wanted it to be over. If it was a boxing match the trainer would have thrown in the towel. It probably went against the Geneva convention and into the realms of cruel and unusual punishment, and over the course of the two legs we crashed out of Europe on an aggregate score of 10-2.

Just as a reminder, here’s what Ivan Gazidis said in 2013, you’ll love this:

We should be able to compete at a level like a club such as Bayern Munich. I’m not saying we are there by any means, we have a way to go before we can put ourselves on that level. But this whole journey over the past ten years really has been with that goal in mind which is why I say that this is an extraordinarily ambitious club.

We get beaten up along the way but I think we are an extraordinarily ambitious club. This has been about putting us up with the best in the world and now the question is turning that platform now into on-field success.

Well, Mr Gazidis, you have failed, because this is a team that isn’t even close to competing with Bayern Munich. Arsene Wenger has not been able to build a team that can do that. I don’t know how many times I need to say it, that it’s time for him to move on because watching a man who has been a great manager for us down the years suffer defeats like this is hard to watch, but let’s not exonerate you and the absentee landlord owner too.

Wenger is very much the lightning rod, and while some might think little of him or his managerial capabilities at this point, I find it hard to stomach that so much ire is directed towards a man who genuinely cares about this club, while the man who doesn’t give a shit beyond the asset value gets away almost scot-free.

When people say let’s focus on a new manager first, remember that it’s this owner who will ultimately sanction the replacement. Does anyone think he’ll bring in a man who might challenge him? Who might demand to be given the money to compete with the biggest clubs? That somehow we’ll start competing for the best players in the transfer market when Wenger goes? Think again. That’s why this current situation at Arsenal is such a worry.

Not to mention the fact that the board will still abrogate their responsibility over the future. Gazidis outsourced it to the fans years ago when he said they would ultimately decide the future of the manager, and there’s no doubt in my mind that they will leave the final decision about the future to Arsene himself. It’s craven.

As I said in the Arsecast Extra this week, it’s like watching a car crash happen in slow motion right before your eyes. There are bodies flying through windscreens right now, and it feels as if things are unravelling. The way we’re performing, the results, the attitude, the way we simply crumble at the first sign of something going wrong, speak to deep faults within the squad and the managerial set-up.

It’s sad to see, because this is a club of enormous potential. Instead, we’ve got a once-great manager speeding rapidly to the end of his reign (and it looks like the end of his tether at times too), and an owner and Chief Executive that sit on their hands allowing him to take all the flak because they’re too cowardly to do anything else.

What a mess. And if you think it’s not, just look at that aggregate score again.